Posted by RiadAlKsar What To Do No Comments

… The centre of Marrakech is composed of several districts with different architecture due to the different eras of construction. The different Areas of Marrakech Gueliz Medina Palmeral are well connected together by bus or taxi 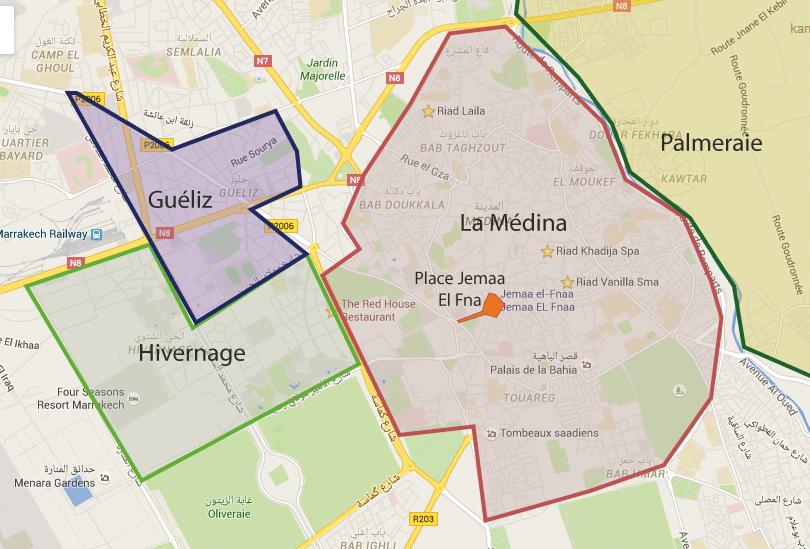 The Mosque of the Koutoubia, dating back almost 1000 years, is often used as a symbol of the city of Marrakech. It is located in the Medina, on Mohamed 5 avenue, connecting Old city to New city Gueliz 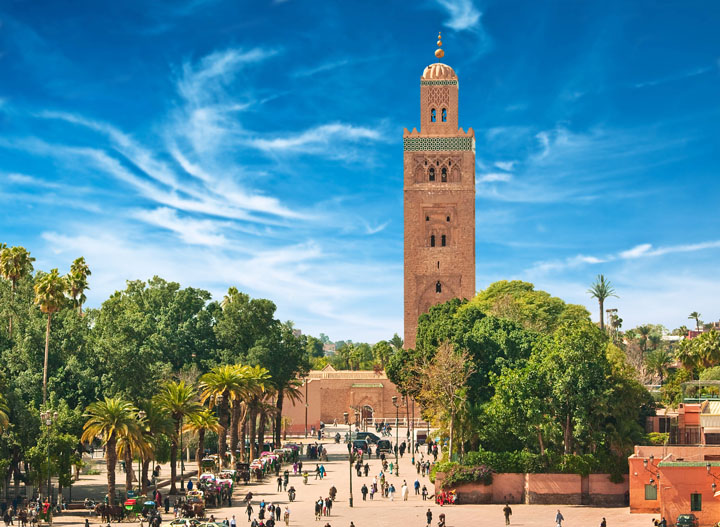 Minaret of the Koutoubia Mosque in Marrakech

Read Article How to Get Around Marrakech by Foot, Bus, Taxi… & Around the City

The Medina isthe most famous of the 3 Areas of Marrakech Gueliz Medina Palmeral as it is the oldest district, dating from the 10th century, 1000 years !, and extends over an area of 600 hectares, one of the largest in Morocco and the most populated. The traditional habitat is the Riad, a closed house with access to a central garden with a water point or a well. Jemaa El Fna Square is the symbol of this old city center.

The venelles or derbs are dead-end alleys and lead the adjoining riads. Often very narrow, the derbs are only accessible by foot or with two wheels or mules. The Medina is surrounded by 19 km of 10th century walls

The Medina of Marrakech is very touristic because of its many monuments such as the famous Koutoubia mosque, the Jemaa el Fna square, the Medersa Ben youssef, the Bahia Palace and Badii palace or the Saadian Tombs. Recently renovated, the Dar Si Said National Carpet Museum or Dar El Bacha Glaoui Palace are also very interesting. 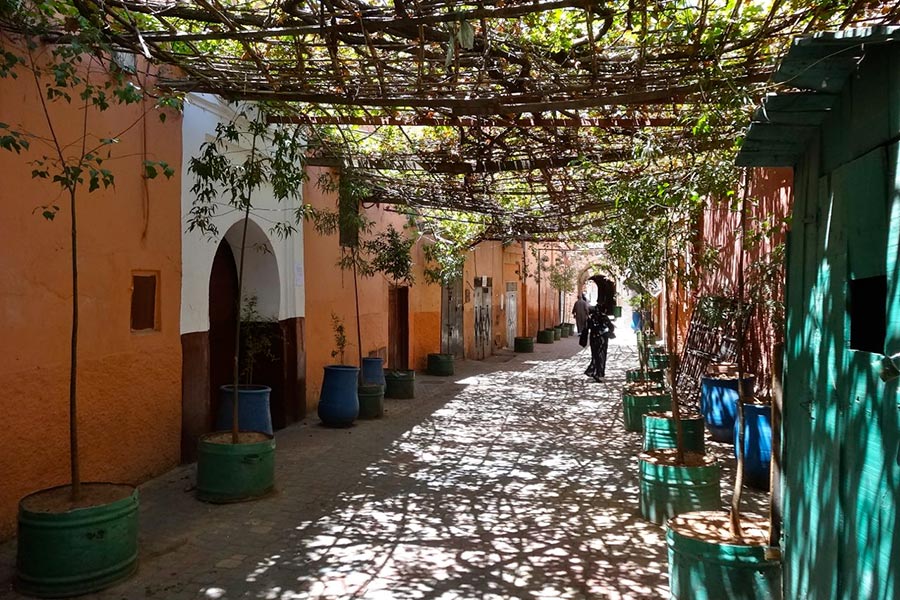 Read Article Monuments to Visit in the Medina of Marrakech

Mellah, which is the Jewish quarter, was founded in 1558. In the heart of the Medina, this district contains certain looms (such as weavers for example) which became the specialty of this district. Its location near the Royal Palace allowed the sovereign to protect the Jewish population at the time. The Mellah synagogue of Marrakech, Salat Al Azama, dates from 1492 and was built by Jews expelled from Spain. Today, very few Jews remain in Mellah.

Morocco is undertaking work to modernize the Mellah as shown in the photo below with the renunciation of the Qsadria square, or Place des Ferblantiers, named after the craftsmen working with tinplate. 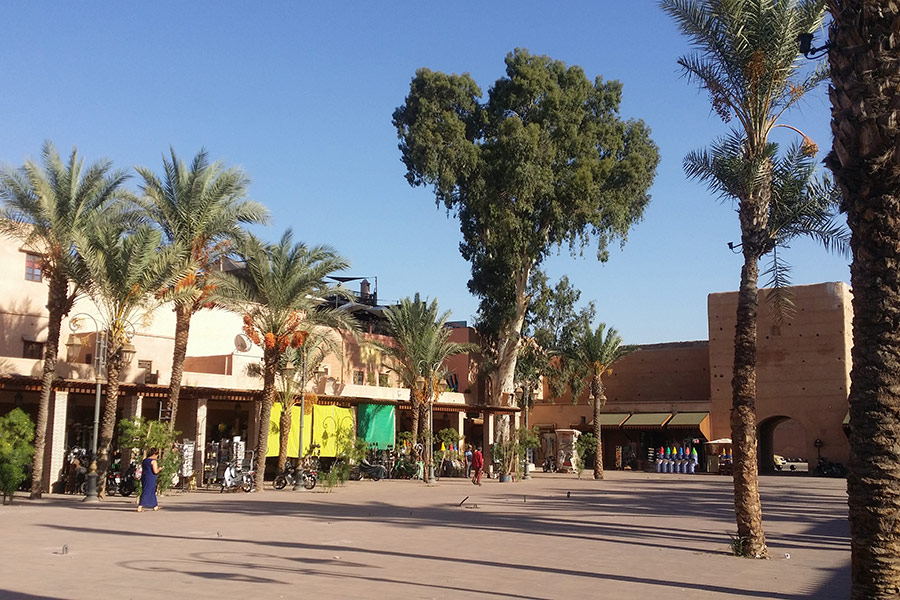 Gueliz developed at the time of the French protectorate and revolves around the Mohamed 5 avenue . The main Post Office is a typical protectoral building, just like the old market of Guéliz, which was recently moved to allow the building if the “Carré Eden” commercial and hotel complex in order to revitalize this city center of this popular district. Today, many five-storey buildings have been built and many international brands are beginning to establish themselves in shopping centres such as Carré Eden or Menara Mall, at the corner of Mohamed Avenue 6 and Menara Avenue. 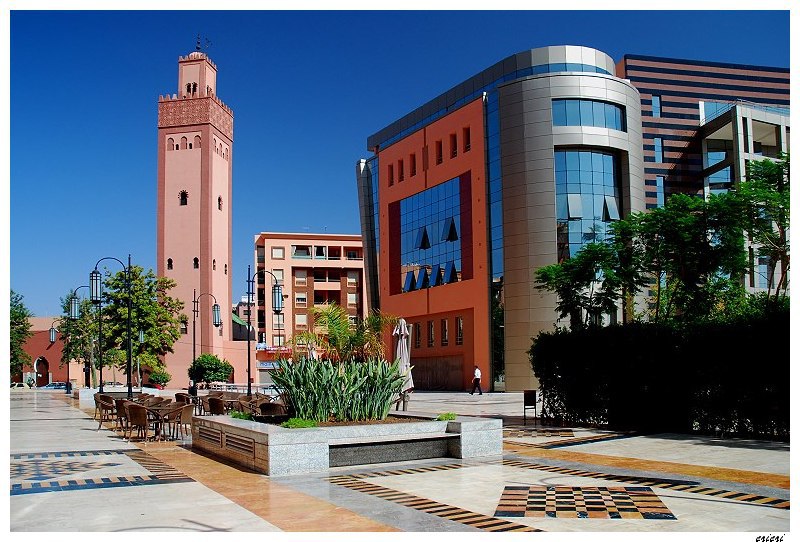 Hivernage (translation of ”Wintering”) further south, at equal distance from the Medina and Gueliz, houses villas and residential buildings as well as luxury hotels. Mohamed 6 Avenue is its main artery and distributes the Royal Theatre and the railway station. The wintering quarter is renowned for its nightlife and mid-western, mid-eastern luxury style. There are many discotheques, casinos and gourmet restaurants.

The Palmeral is situated 5 km from the city centre and is the residential, wooded area of the city, with many villas with luxuriant gardens and Marrakech club hotels. In the quiet, this district was created in the 12th century by the Almoravids to provide cultures and shade. It has been reforested following the degradation of palm trees. Reforestation projects are currently still underway. 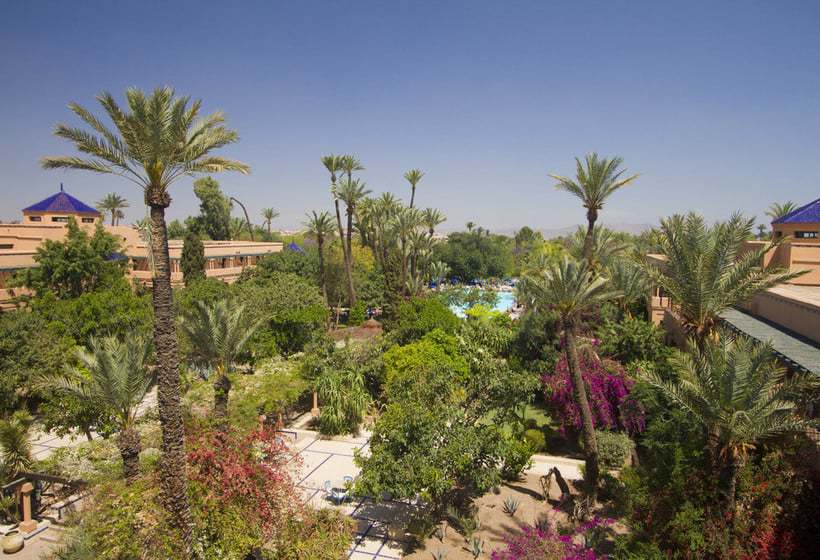 Riad Al Ksar & Spa is located in the Medina of Marrakech, in the Jewish quarter of Mellah, 30 meters from the synagogue and 200 meters from the Place des Ferblantiers, also called Qsadria, nearby all Major Tourist Attractions and Monuments.

Visit the Riad Al Ksar & Spa, in the Centre of the Medina, near Jemaa El Fnaa and the Souks

Weather & Temperatures by Month in Marrakech

Things to Do in Marrakech ?