Marrakech to Essaouira | From the Red City to the Blue One

Posted by RiadAlKsar What To Do No Comments

Marrakech to Essaouira | From the Red City to the Blue One

…  Want to escape from Marrakech and its souks, want fresh air and a wide open sea? Direction Essaouira in Morocco for a day or more. 191 kilometers away, Marrakech to Essaouira allows you a break and escape for an excursion, and to fill your cameras with unusual and magnificent photos of Essaouira Morocco, such as goats in the trees, or the sunset on its Medina and its ramparts.

1. Marrakech to Essaouira: On the Road From the Red City to the Blue One

A/ How to Get to Essaouira? Which Transport?

The official distance between Marrakech Place Jemaa Efna and the Port of Essaouira is 177km by National Road 8 and then the R207, or about 2h30 of travel. Once the Chichaoua Loudaya highway interchange has passed, the road turns into 2 lanes, so be patient until then.

There are several ways to get there depending on the budget:

– By bus from Marrakech bus station with Supratour or CTM agencies to Essaouira. Count from 75dhs to 100dhs depending on the comfort of the bus (with or without air conditioning and wifi), and especially remember to book in advance during high tourist season in summer – see websites of the agencies for schedules.

– By collective taxi, count 7 to 8 euros per person – to share with 6 other people. Be careful with the heat in summer – prefer an air-conditioned bus for the same price.

– By private taxi, from 65 to 80 euros depending on your negotiating skills.

– In a rental car, count about 25 euros per day from good agencies (or less if you buy on the net). However, be careful to respect speed limits, manual radar speed controls and the many mandatory stops of the Royal Gendarmerie, in order to avoid fines.

-Is there a train from Marrakech to Essaouira? In a few years, with the TGV, it will take 45 minutes…operational by 2035.

Read Article How to Get Around Marrakech Easily ?

B/ What to See on the Road from Marrakech to Essaouira: Goats in the Trees?

Apart from the traditional large villages of Haouz region (Marrakech) and Souss region (Essaouira Agadir), such as Loudaya, Chichaoua, El Hanchane, Ounagha – you can eat during breaks, or occasionally visit the weekly souks, the road is monotonous over a long part.

As it approaches Essaouira, the road is bordered on either side by Argan trees, an endemic symbol of the region since the 10th century. It will not be difficult for you to recognize this tortuous tree. Because Argan Trees are often covered with goats, those tasting the leaves of the organ trees by pack, climb the branches…for the sole pleasure of tourists and passers-by. 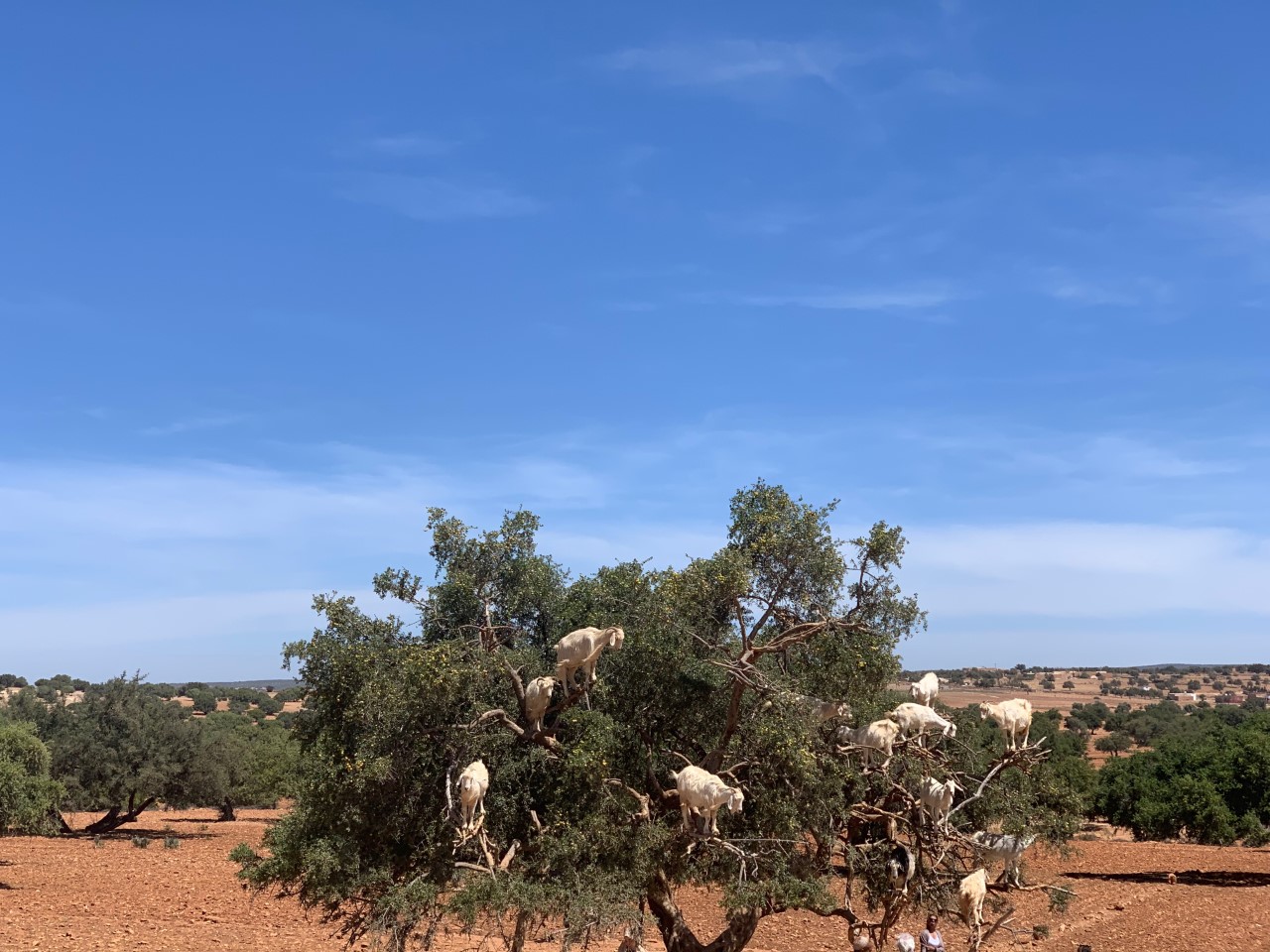 2. Discover Essaouira Mogador: History and Description of the city of Essaouira

A/ A Little History

Developed as the Mogador trading post around 1506 by the Portuguese – in vain, Essaouira was only really established in 1760 by the Alawi Sultan Mohammed ben Abdellah. The latter ordered Vauban’s pupil, Theodore Cornut, to build the ramparts in the European style over more than 2 km. This one will be inspired by the French Port of Saint Malo and its very well drawn quadrilateral plan, hence the Arabic name Es-Saouira meaning « the well-drawn ».

Essaouira, which wanted to be the port of Marrakech on the ocean, became very quickly a large, active, prosperous and brilliant city, playing on being the rival of the great Agadir, another city created from scratch by the same Sultan. Many Jewish craftsmen settled there, forming the Mellah Mogador (now almost completely destroyed) and rooting a rich craft of jewelry.

Despite a golden age until 1822 under the aegis of Moulay Slimane, Essaouira would not cease to decline after the bombardment of the city and its port by the French Navy in 1844 during the first Moroccan war under the French King Louis Philippe.

Discover Excursions from 1 to 3 Days around Marrakech

B/ Tourism : Description of the City of Essaouira

Today, visiting and describing the city of Essaouira means talking about:

– Essaouira Beach and its long seafront, recently renovated from top to bottom for the pleasure of locals and tourists discovering the resort or lovers of kitesurfing and windsurfing because the wind is almost always present.

– The Sqala of the Kasbah of Essaouira, a 200m long crenellated rampart, used as a round path and artillery platform with about twenty Spanish-made bronze guns. It has been classified as a historic monument by Royal Decree since August 1924. 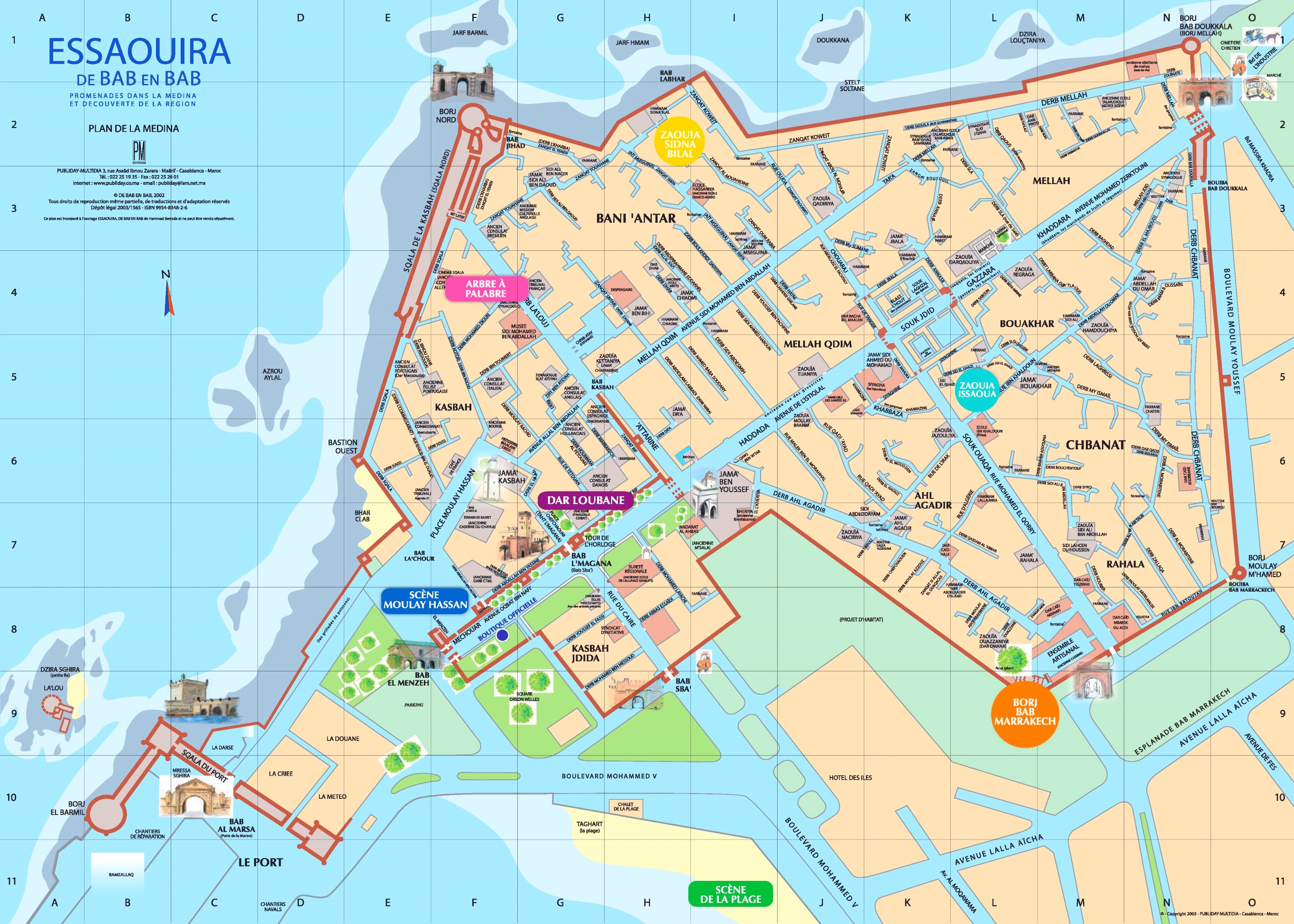 – The Sqala du Port was built in 1769, a Portuguese style artillery platform. Its main purpose is to defend the port, it consists of 2 batteries or fortified wings 200m long intersecting at right angles at the Borj el Barmil. It is equipped with 12 Spanish-made guns visible from its battlements and watchtowers. It is possible to visit the sqala for 10 dhs. The Sqala has been classified as a historic monument by Royal Decree since August 1924.

– Bad el Marsa is the Navy’s gateway, which connects the Medina to the port’s quays. Symbolic of the city of Essaouira, it was built in 1796, and has 2 watchtowers and a classic pediment flanked by 2 pillars. It has been classified as a historic monument by Royal Decree since August 1924.

– The port of Essaouira, a small fishing port where it is good to stroll, taste fresh seafood (sea urchins, oysters) and buy your fish. 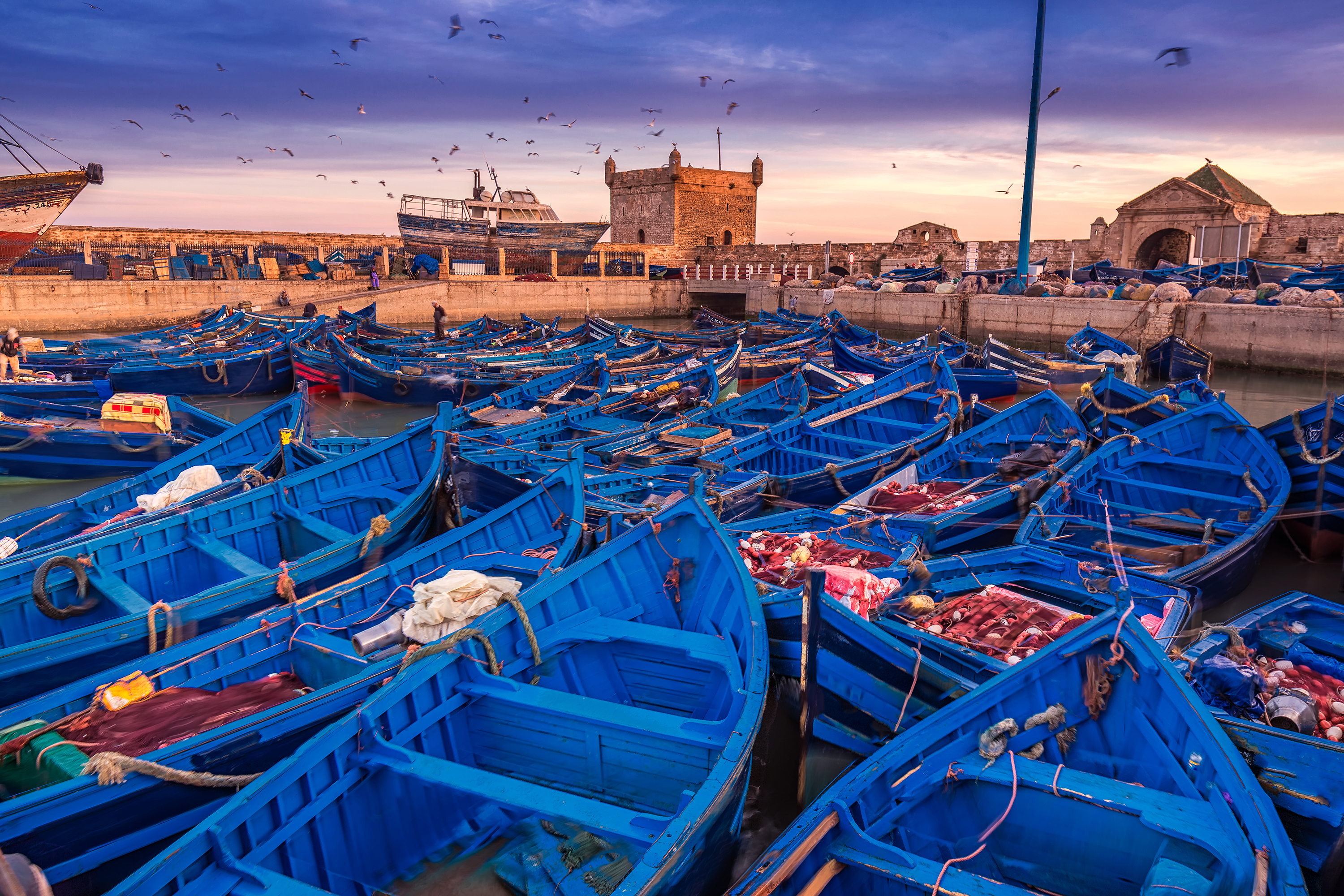 – The Purpuraires Islands and Mogador Island – are a set of islets protecting the city and the port from the swell. Throughout history, they served as places of sacrifice, as places of Purple plant factory. Nowadays, the largest island Mogador is an ornithological birds reserve, which can be visited by boat owners on the port. 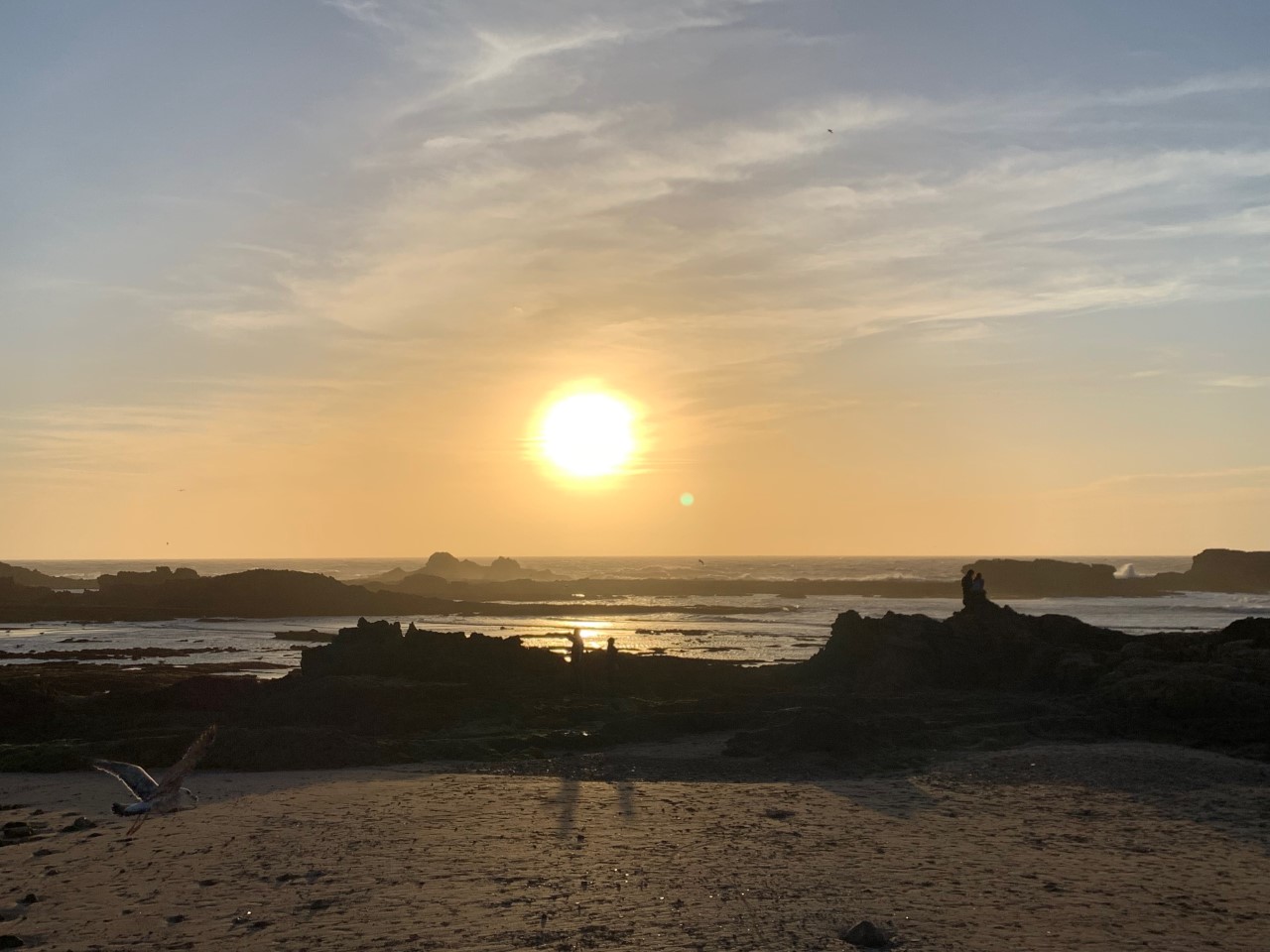 – The Medina of Essaouira has been a UNESCO World Heritage Site since 2001. The only medina in Morocco with an orthogonal plan, with wide straight arteries, it is surrounded by the Vauban style wall. Organized by souks, or districts, it houses many hotels and riads of Essaouira and its fish restaurants, where you can eat and stay in Essaouira. 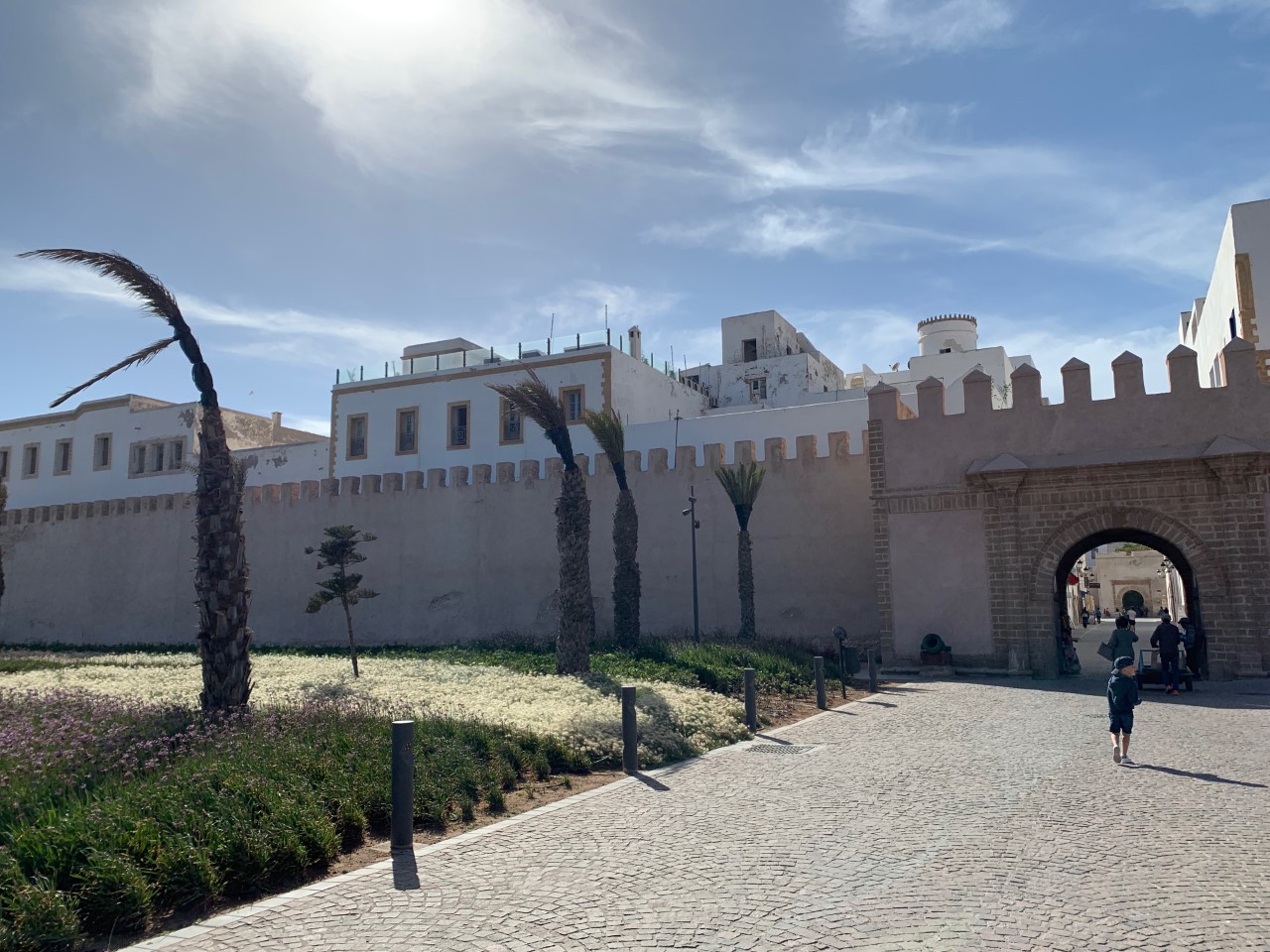 – The Mohamed ben Abdellah Museum, located in an old 19th century building, presents all the cultural and historical heritage of Essaouira and its region. Price of the visit: 10 dhs.

3. Things To Do in Essaouira and the Surroundings

If you stay a few days in Essaouira even if the weather is not very good, a visit of the surroundings will be necessary outside of an afternoon on one of the beaches of Morocco Essaouira. It is advisable to push the visit to the North and South of Essaouira:

A/ Towards the South: Surf in Sidi Kaouki, the Kingdom of the Argan and the Sidi M’Barek Waterfall

– Diabat, just 3 km south of Essaouira, is a small village known for its Ranch, riding school and many horses, but also by Jimmy Hendrix and other hippies from the 1970s who stayed there – Hendrix’s famous 1967 song Castle Made of Sand refers to the famous Andalusian fortress Dar Sultan, now practically silted up. 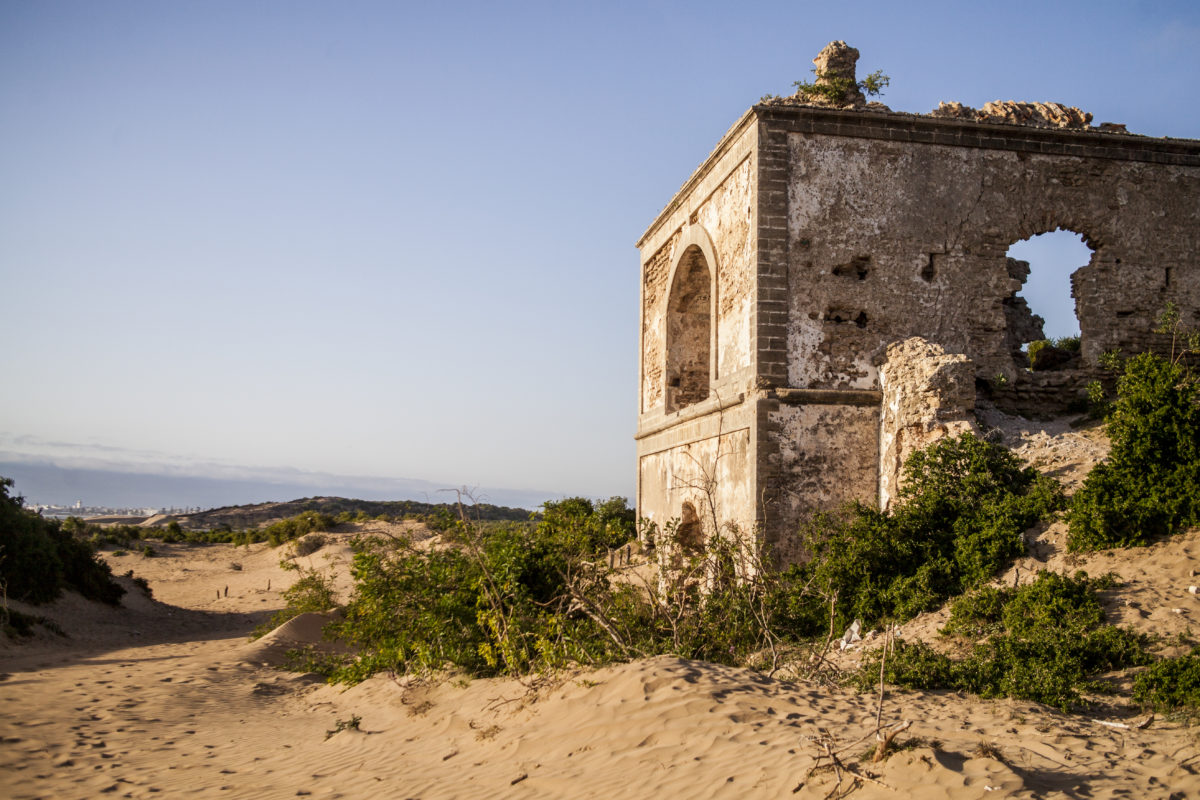 – The Smimou Salt Works, spread over ten hectares, bring together several operators 15 km from Essaouira – salt intended for the Safi canneries in order to be refined before being on our tables. 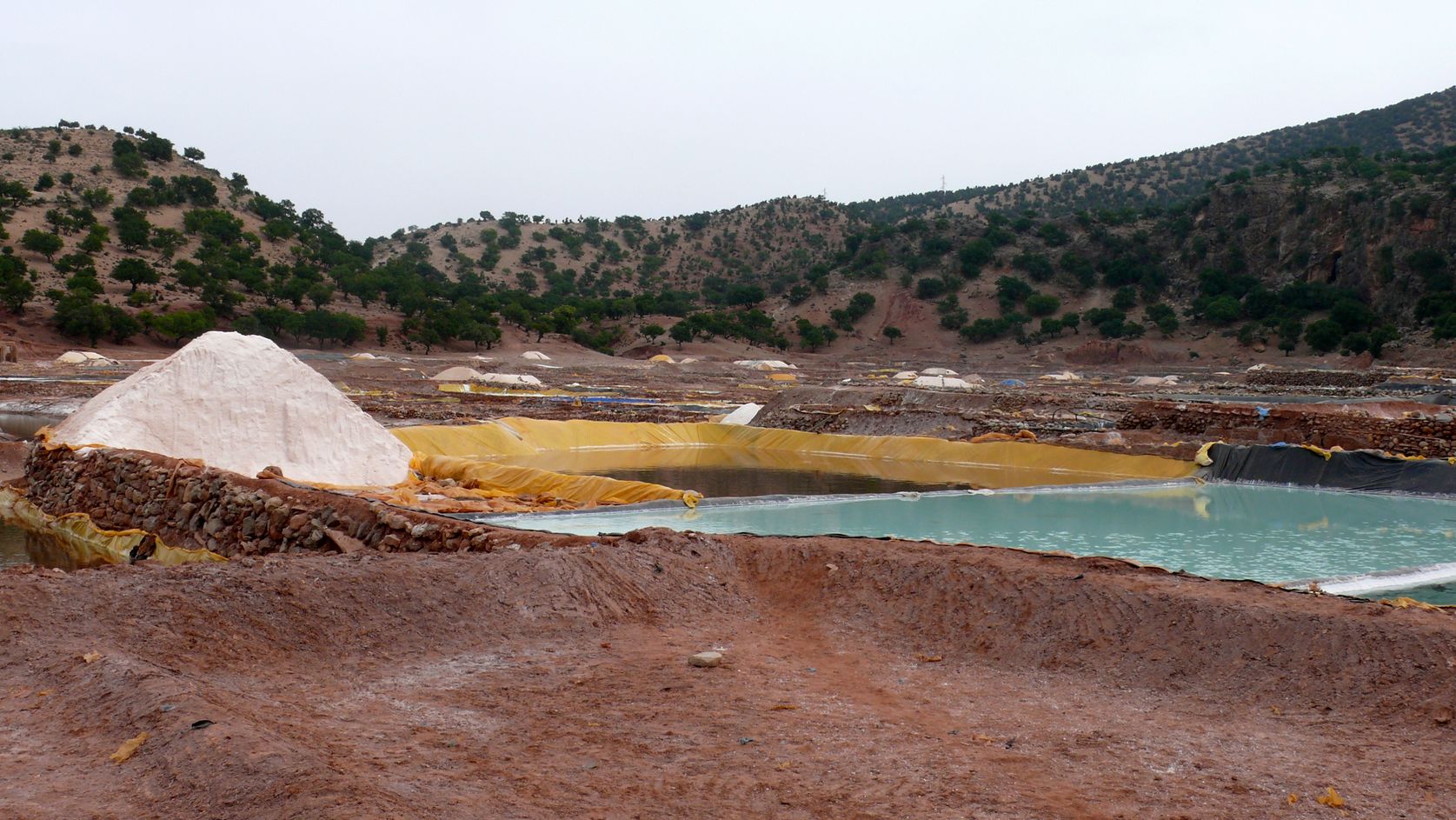 – Sidi Kaouki, closest beach to Essaouira is at 25km, has become important since the early 2000s. Apart from the presence of the house of a Marabout overlooking the beach, this fishing village only develops in favors of surfing, windsurfing and kitesurfing. Only one valid surf school address, those of the Essaouira twins, just based in the arcades of the Marabout Auberge Inn : https://surftwinsessaouira.com/

– The Sidi M’Barak Waterfalls are located 12 km along the coastal road to Agadir south of Sidi Kaouki. Born from the erosion of the Oued Aghbalou river on the rock, after a 45-minute walk from Ait Idir via mule track, you will access it and you will be able to refresh yourself by wading – crossing the dunes and the earth, the sea and the river, you will be amazed by this green landscape of freshness. Be careful the flow rate will depend on the waterfalls, from a simple stream of water to real waterfalls. 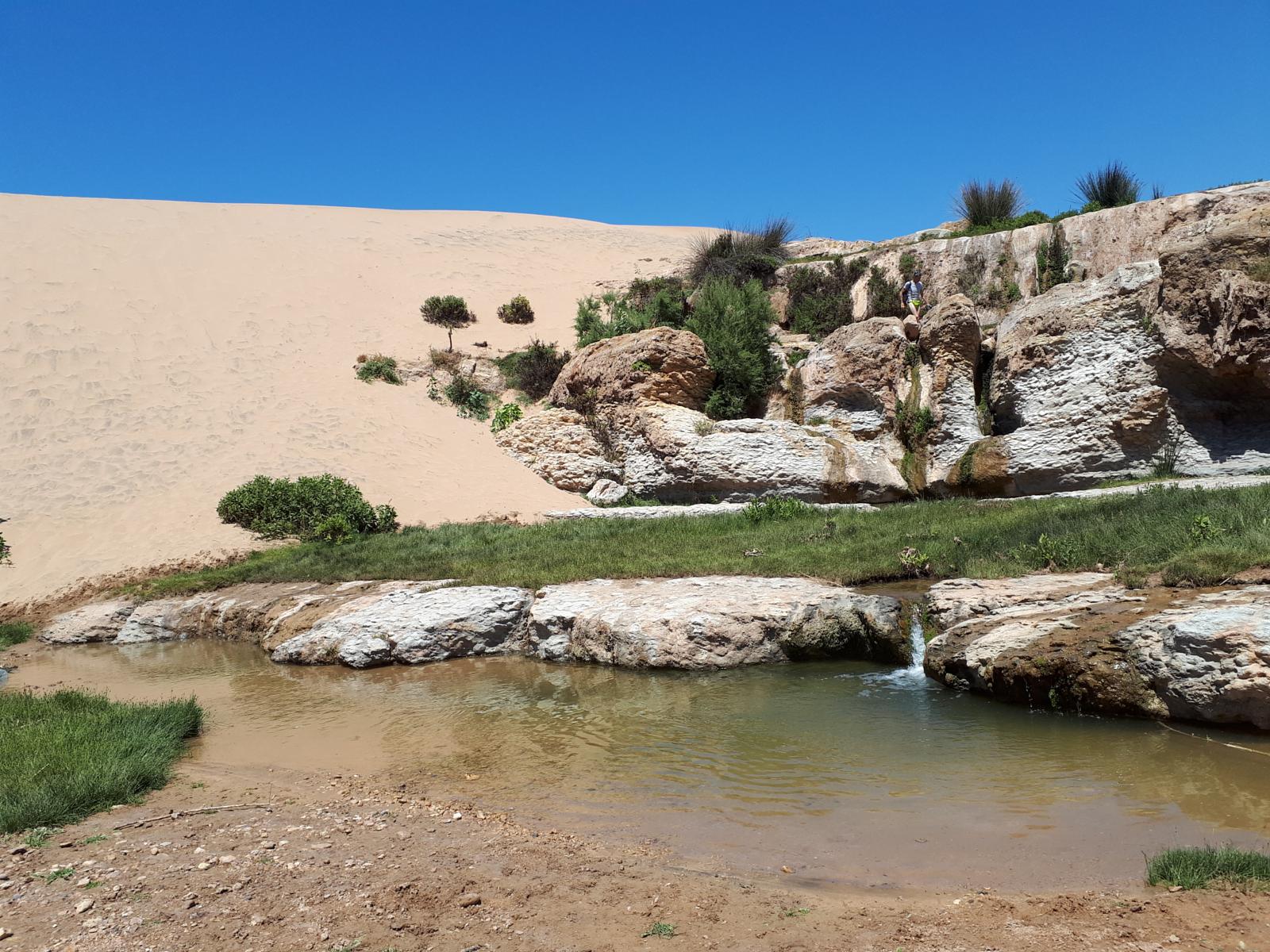 – The Kingdom of the Argan begins even further south around the Tafedna and its famous bay – if you see many goats in the trees, stop and visit an association of women making real Argan oïl, the Souss plain being the one supplying 40% of Morocco’s Argan oil.

B/ Towards the North: Oasis of Ain Lajhar, Souk Had Draa and the village of Moulay Bouzerktoum

– Oasis Ain Lahjar is located less than 1 hour north of Essaouira on the coastal road to Safi. Stroll in this small green valley sheltering a small river allowing by an irrigation system to develop olive trees and pomegranates, as well as garden vegetables including the famous Slaoui, a small squash.  Discover the small white mosque, the local Marabout house and the tomb of a saint.

– The Had Draa Souk, 20 km from Essaouira, is held on Sundays, organized by district or trade – it is the souk of the typical region not to be missed.

– Beach and village of Moulay Bouzerktoum 30 km north of Essaouira, discover its fishing village. Its cliff path, its white mosque and the Marabout house and do not hesitate to practice a water sport. 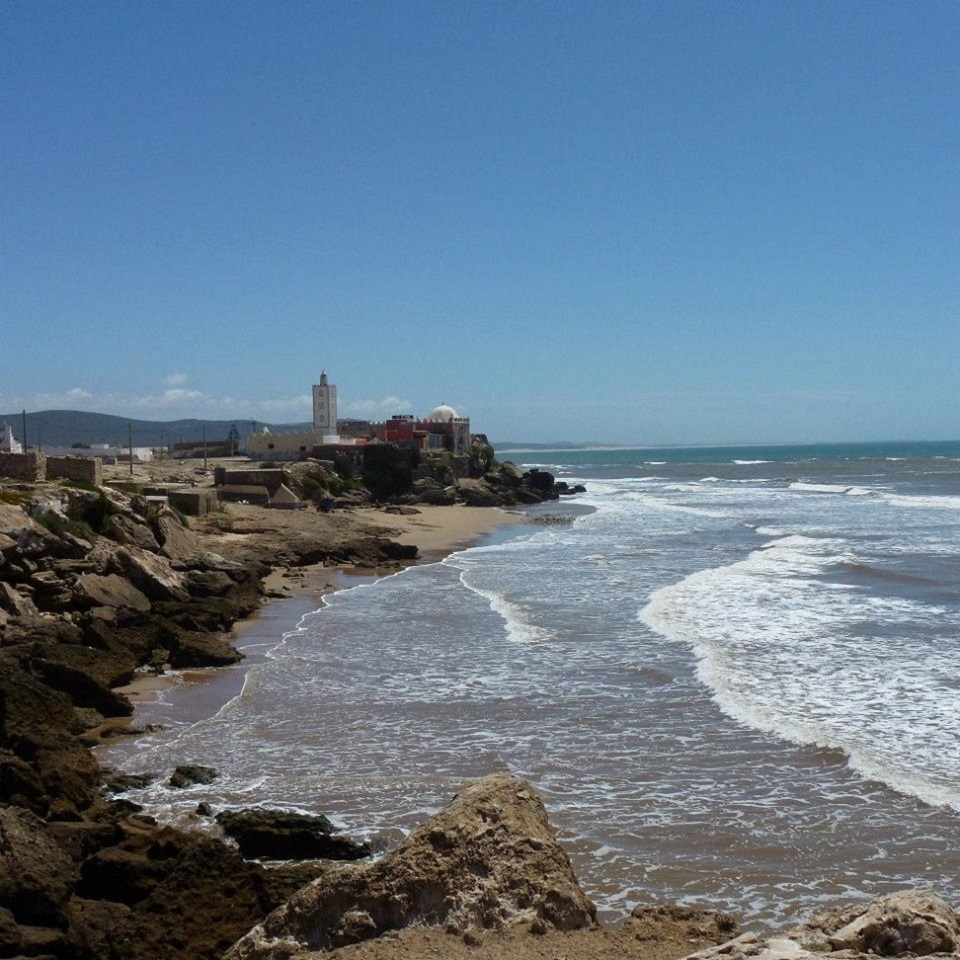 C/ Return from Essaouira to Marrakech

After a good break in Essaouira, it is time to return to Marrakech, the capital of the Great Moroccan South. The head full of memories, will swarm and remain engraved in the memory, with its unique Portuguese heritage and wild coast.

To discover all the charms of Essaouira and its surroundings, 1 to 3 days are essential. Though depending on your desire for idleness or sport, your appetite to discover and learn. Marrakech to Essaouira is the fun break from your holiday if you are staying a few days to a week in Marrakech.

The Following Articles are also likely to be of Interest to You:

What to See in Marrakech ?

Back to Blog Marrakech

What to see in Marrakech ? During a 3 Days / Nights Break & More
Gardens of Marrakech | Exoticism & Poetry
Ourika Valley What is it ?
What to Do in 2017 in Marrakech ? What to See and to Visit ?
Yves Saint Laurent Marrakech Museum | An Haute Couture Museum
Jewish Mellah of Marrakech | History & Visit of Ancient Jewish District