… In Morocco, the Mellah is a term used to describe an area of residents of Jewish origin. It is generally surrounded by high walls to separate them from other population such as Christians and Muslims. The Jewish Mellah of Marrakech is considered as one of the largest in Morocco. By its history and geography, it surprises and impresses us until its recent renewal wanted by King Mohamed VI.

Since 1438, following the great wave of immigration of Jews from Spain fleeing the persecutions of the Reconquista, several urban mellahs were created on the Moroccan territory. From Fez to Meknès, from Essaouira to Taroudant, from Rabat and Sale, and in Marrakech. 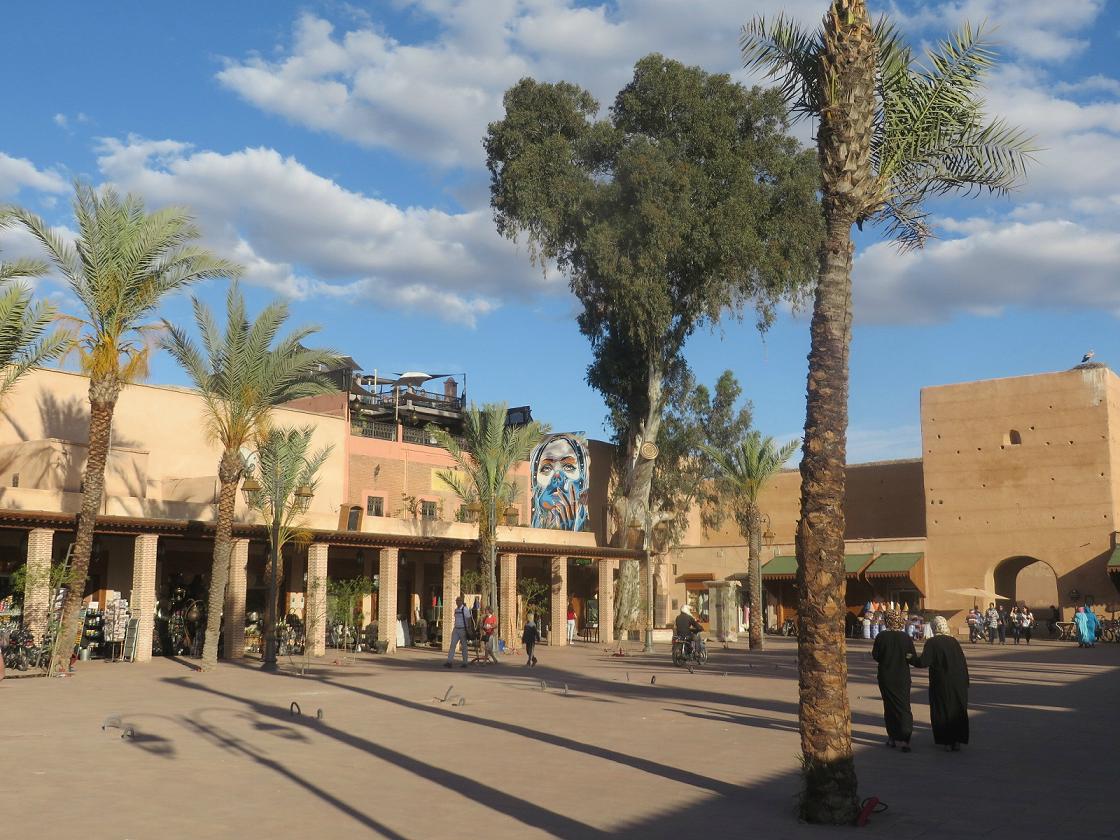 1 History of Jews in Morocco : from the origins to the present day – including the creation of the Jewish Mellah of Marrakech

Even if the presence of Jews has been documented since the 2nd century, the Jewish Mellah of Marrakech has only been recognized as such since 1558, the date of its creation by the authorities.

Before that date, Morocco and the 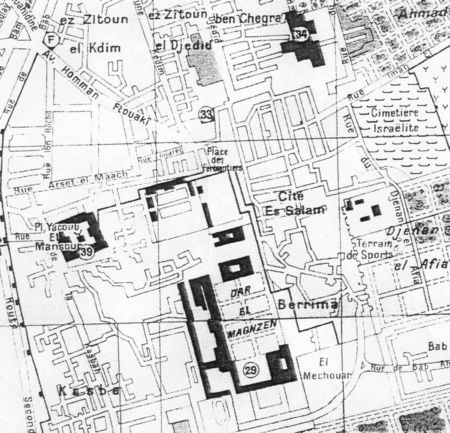 Jews had a history of ups and downs depending on economic conditions, political and religious hazards :

– Before the Muslim conquest of the Maghreb, the presence of Karaism (the current of scripturalist Judaism, in opposition to the rabbinic Judaism current) is attested in certain Berber tribes (Berbers of the Maghreb-el-acsa)

– With the Muslim conquest and the imposition of Islam on Berber tribes in the 7th century, Jews of Andalusia and Kairouan origin migrated and settled in the major urban centres of the time (Fez, Tangier, Merzouga)

– Under the Almoravids, Marrakech was founded in 1060, Jews settled about 40 km away, they were tolerated and paid the head tax due to their dhimmi status (non-Muslim citizen) and religious understanding was cordial. Everything changed in 1140, with the arrival of the Almohads and the capture of the city of Merzouga.

– Under Abd El Munim, the first Caliph of the Almohads, religious intolerance was established under the influence of the Mahdi doctrine, and the first executions took place in certain cities of the Kingdom. Jews exiled to more tolerant urban centres as the Almohad conquest of the Iberian Peninsula progressed. In 1232, a large Jewish community was registered in Marrakech. Synagogues were reopened, families were also converted to Judaism. All this despite the imposition of a distinctive habit by the authorities and assassinations during uprisings and riots of the population.

– With the Reconquista, as the Jews of Spain were persecuted, a large community began to exile itself to North Africa. In 1438, the first mellah, a district reserved for Jews, was formed – it was the one in Fez.

– The date of the end of the Reconquista is 1492. A great wave of immigration affected Morocco with the Alhambra decree of expulsion of Jews by the Kings of Granada, on 31 March 1492. From the North (Fez, Tetouan, Meknès, Tangier), to the Moroccan Atlantic coast (Mogador Essaouira, Rabat, Sale) – a new age of Judaism in Morocco is developing. 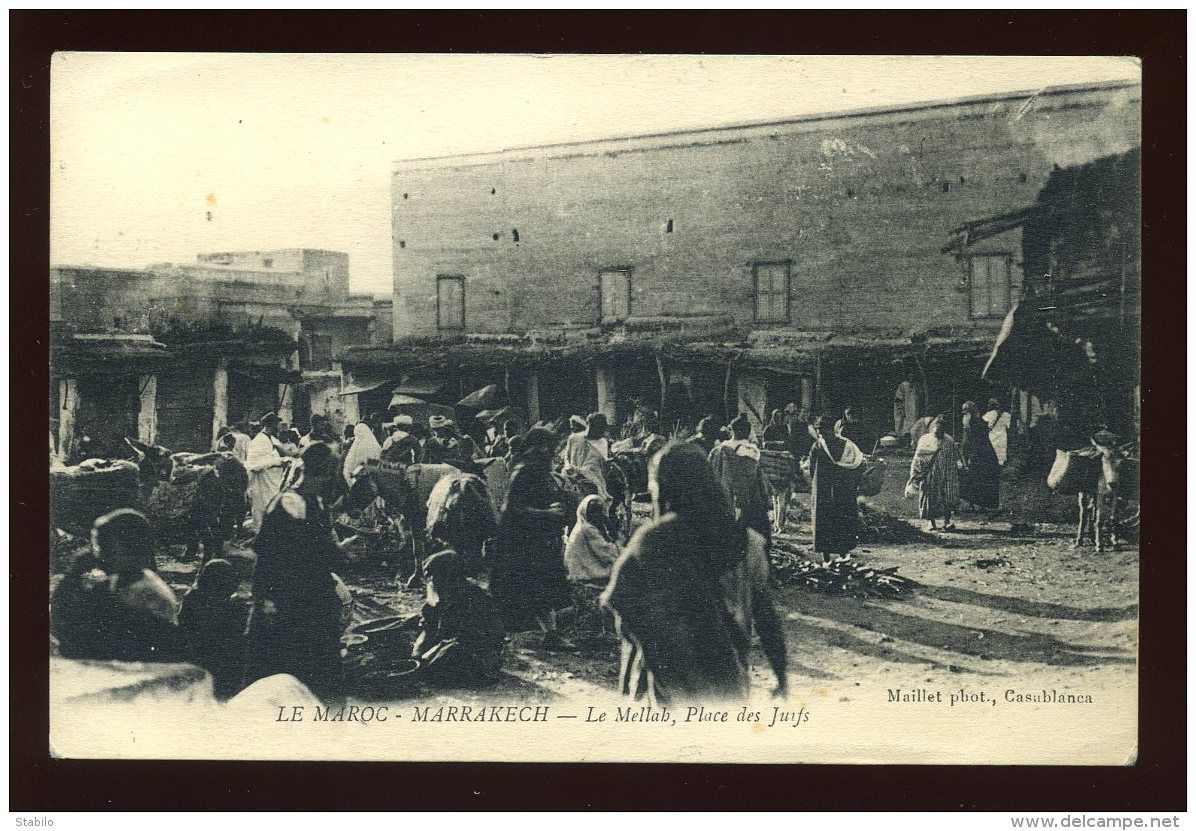 It is in this context that the Jewish Mellah of Marrakech was created by the will of King Moulay Abdallah of the Saadian dynasty, in order to beautify his city and protect his Jewish community – in 1558.  The King moved for the occasion to the foot of his palace (now the Royal Palace of Hassan II) : 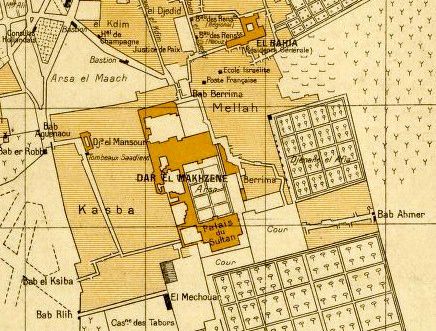 Discover the Full Article About The Saadian Palace El Badi

The King gave outside the walls of the mellah, a piece of land to house the cemetery.

From the 16th to the 20th century, the history of the Jewish Mellah of Marrakech more or less reflects the history of the other mellahs of Morocco. Depending on economic hazards, diseases and plagues (pestilence among others), religious disorders (with its share of abuses, executions, pogrom, etc.), the mellah developed.

From the French Protectorate and the 2 World Wars, and especially the creation of the State of Israel, Jews gradually left Morocco around 1956. The Jewish houses or riads in the Marrakech mellah are abandoned or bought by the natives. Today, the district is almost only populated by Muslims. 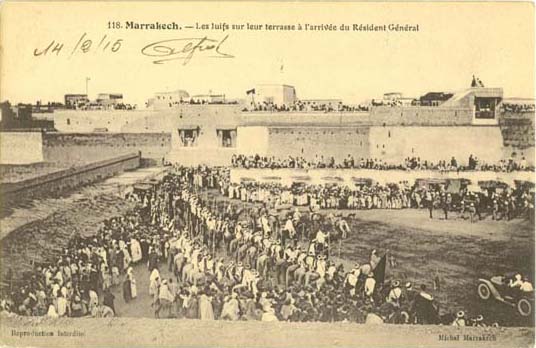 Throughout the Middle Ages, the population of the Jewish Mellah of Marrakech was estimated at 70,000 person. At the end of the 18th century, a figure of 35,000 was put forward. In 1936, 15,000 Jews were registered. Since the end of the Second World War and the creation of Israel in 1948, the Jewish population has been steadily decreasing. It now stands at 175 persons. Very few of them live in the original Mellah (less than 10 people), they preferred the comfort of the new city of Marrakech, Gueliz. 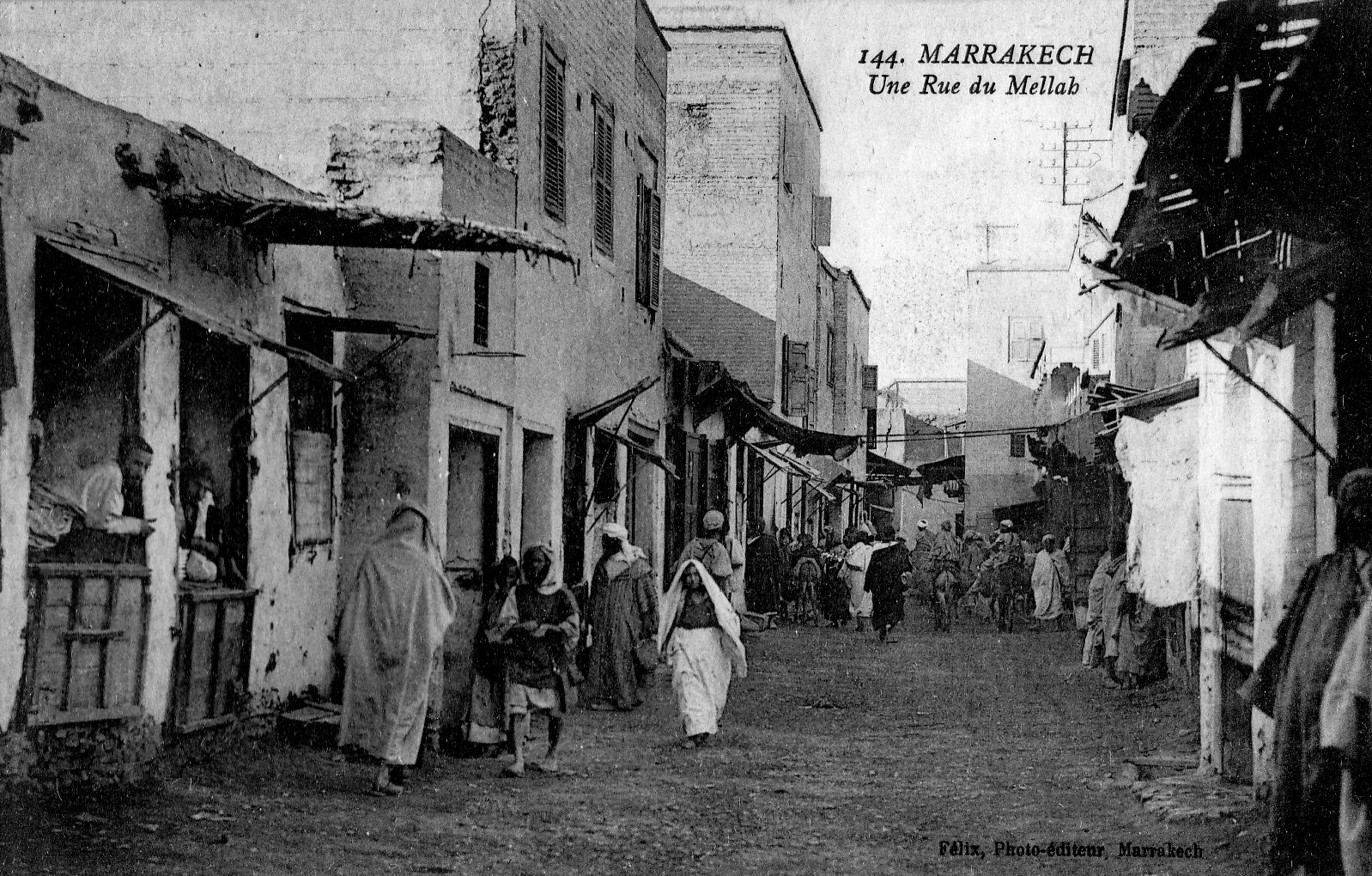 2 Historical geography of the Jewish Mellah of Marrakech

A quadrilateral of more than 18 hectares, the historic mellah is surrounded by large walls with 2 access doors on the outside (bab in Arabic) : one toward the city itself, the other on the cemetery.

The streets, the parallel or perpendicular internal lanes, with its high houses without windows, thebalcony buildings (some of them), however, gave it a certain regularity and homogeneity. 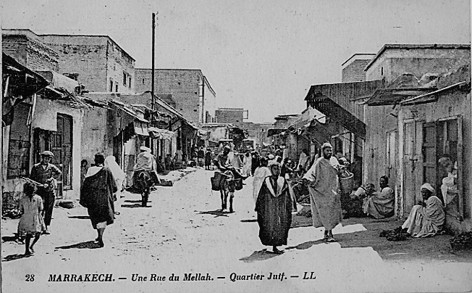 2.1 Composition of the Mellah

The Mellah was essentially composed of :

-fondouks (or caravansérail : large house centred on an inner courtyard used as commercial warehouses, animal shelters and accommodation for merchants and travellers).

-synagogues (up to thirty enumerated).

The Square des Ferblantiers is the nerve centre of the mellah by day, the door toward the city opening into its centre, with Jewish craftsmen working in tinplate. A tradition that has been maintained since then until the Arabs nowdays. The souk of spices and the souk of jewellery were known and frequented by Muslims since the 16th century. 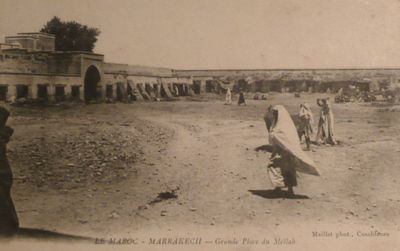 The mellah was above all a place of business and trade where all the professions prohibited to Arabs were represented and where all products were found.

Jews were not permitted to leave the mellah at night, a strict ban being in force, both doors were locked at night. However, it was not a ghetto, as people of different religious backgrounds could move inside and outside the mellah itself.

Due to the waterproof nature of its walls, and despite some economic activity, the mellah was considered a poor district. Many distant stories and images tell us (depending on the hazards of history and time, and especially the political and religious fact) that the area was ravaged by poverty, famine, insalubrity, disease in the worst hours.

From the 1960s to the present day, the district having been empty of its population of Jewish origin, the Mellah is considered as apole :

– Artisanal : the souks are home to craftsmen (fabrics, tinplate, etc.) 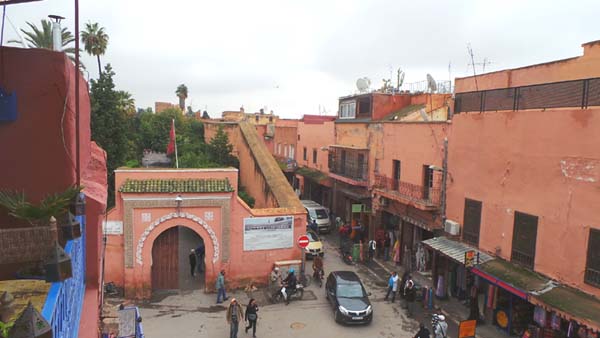 – The Miara cemetery, dating from the 16th century, is the largest Jewish cemetery in Morocco. Divided into 3 distinct edges (men, women, children), it is the only one to be so because of the singular custom (minhaggim) of the Jews of the city of Marrakech. 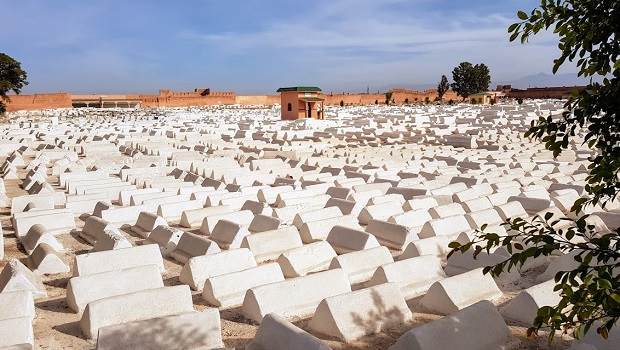 – The recently renovated Tinsmiths’ Square (Place des Ferblantiers) overlooks the Badi Palace by an arch, the entrance to the Spice Souk and the Mellah Souk on its left side, and the alley leading to the Bahia Palace. You will find shops, restaurants and snack bars and in a corner some tinsmiths.

– The Spice Souk at the entrance of the great souk of the Mellah. You will find all the Moroccan spices, herb and herbal tea merchants, fabric shops to have you make clothes or decorative objects by local craftsmen. 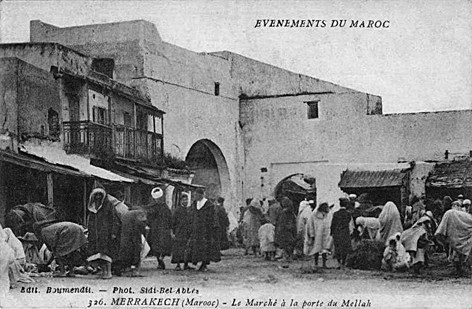 – The Kissaria of jewellers and goldsmiths (at the end of the square of the Tinsmiths’ Square, towards the Bahia Palace). Jewish creation taken over by the Muslim population since then, organized around 2 covered galleries. You can admire gold and silver coins, fibulas, Fatima’s hands and other Berber jewellery.

3.3 Refurbisment, rehabilitation of the Jewish Mellah of Marrakech

In 2014, a conservation programme for the former Medina of Marrakech was launched by the Moroccan authorities. With the Mellah district at the centre, given the constant degradation of its habitat since the 1970s, this program in 2 phases promises :

– The renovation of shops in the various souks (store fronts, wooden and glass canopy with rain protection)

– Creation and rehabilitation of souks and fondouks, the Fondouks (Moulay Mustapha and Touma, as well as Souikat of El Mellah, Tazi and Souloubane)

– Destruction or renovation of about a hundred houses, renovation of house facades requiring it (in each alleys) and existing walls.

– The construction of four local social facilities dedicated to the elderly, women, youth and children in the neighbourhood. 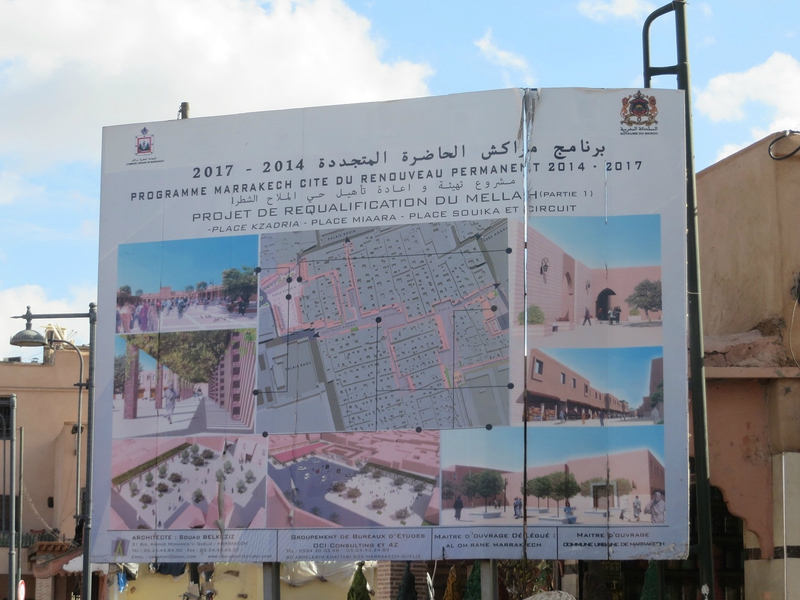 This comprehensive urban renewal programme for Hay El Mellah is part of the implementation of the development plan “Marrakech, City of Permanent Renewal”, launched by King Mohamed VI on 6 January 2014.

Renamed 20 years ago Essalam or Hay Salam (meaning peace in Arabic), the district on royal instruction took its original name of El Mellah in 2017. In order to preserve the historical memory of the places and develop the cultural vocation of Marrakech according to the official community. To do this, many alleys have found their Hebrew street name plates, including that of the Salat El Azama synagogue, which became Talmud Thora.

4 What is a Mellah ? Etymology and definitions

Various interprétations exist on the origin of the word mellah :

– In general, a place or districtreserved for Jewish residents of major Moroccan urban centres

– Activity of some Moroccan Jews to keep in salt, the decapitated heads of rebels to the authorities and other bandits, in order to expose them to the public for example.

Etymologically, the mellah coincides in Hebrew or Arabic with the word salt according to various sources. But a debate is open about the various translations depending on whether one is Jewish or Arab.

4.2 Others Mellah district in Morocco to Visit

Note that there are other mellahs to visit in Morocco :

-that of the city of Fez (the oldest)

-those of the city of Meknes, the latter having 2 different Jewish districts (the old one dating from 1682 and the new one from the 1920s)

-The mellah of Mogador-Essaouira is no longer visible because the last remaining Jews were destroyed in 2016.

History of Bahia Palace in Marrakech

Back to Marrakech Blog