… The Bahia Palace Marrakech is a major historical monument built in the 19th century, and the most visited in Morocco, with 600,000 visitors per year.

Built on 2 hectares, plus 6 hectares of Agdal (vegetable garden), it is a masterpiece of Moroccan architectural art from the late 19th century. 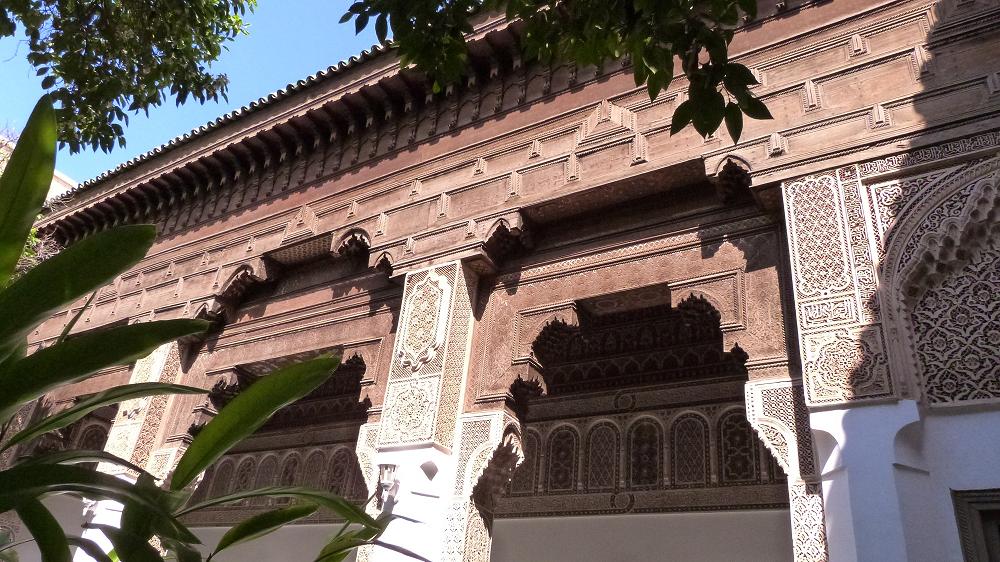 Built in the ancient Medina of Marrakech at the end of the nineteenth century, from 1866 and in several stages, its history is rich in political events that allow better understanding. Today, it is managed by the Moroccan Ministry of Culture.

The differents parts of the Bahia Palace Marrakech accessible to the public are : the small riad, the large Riad, the small courtyard, the large courtyard or main courtyard. You can discover them in detail hereafter 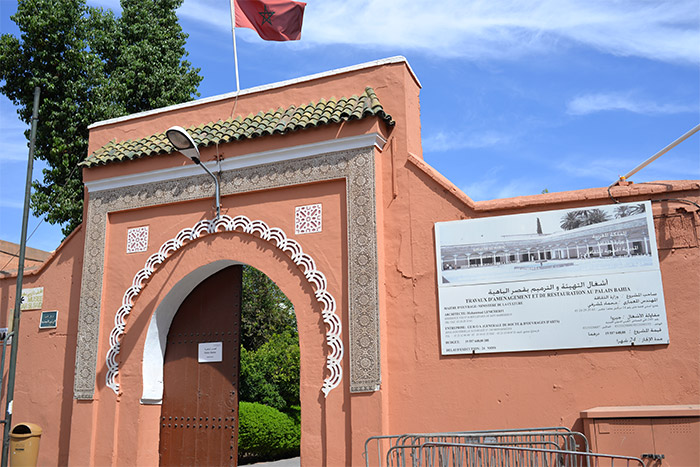 2/ A Palace with Oriental Beauty

The history of the Bahia Palace Marrakech begins in 1866. Sidi Moussa, then rich and powerful Chamberlain (right arm of the Sultan) then Grand Vizir (literally head of government) of Hassan I, the Sultan Alaouite of Morocco (1836 – 1894), built a large Riad and its central garden, as well as a large courtyard with its outbuildings, such as stables, in the north-west part of the present Bahia palace.

The materials used are at the height of the Vizirs status : Marble, earthenware – zelliges, cedar wood and it is called upon the best craftsmen of the kingdom : Marble, Plasterers, Carpenters… The palace is located in the medina, a few steps from the present royal palace, former palace of the Sultan, as well as the Badii palace and the gardens of the Agdal.

3/ A Vizir Palace at the time of the Sultans

In 1894, Ahmed ben Moussa (1841-1900), son of the Grand Vizir Si Moussa, succeededhisfather and took the title of Grand Vizir. The same year, following the sudden death of Sultan Hassan I, Abdelaziz ben Hassan his son, (“ben” meaning son of), inherits the office of the Sultanate. But the new Sultan Moulay Abdelaziz, born in 1878, is only 16 years old and too young to govern. 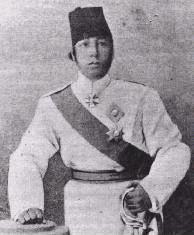 It was then Ahmed Ben Moussa, himself Grand Vizir, who was regent of the young Sultan Abd al-Aziz of Morocco (1878 – 1943). The Grand Vizier Ahmed ben Moussa, more commonly called Bahmad, reigns over all Morocco with authority and the Court settles in Marrakech.

It was at this time that he bought an important complex of houses near the Bahia Palace Marrakech, built by his father Si Moussa, and had it enlarged by the Moroccan architect, Mohammed ben Makki el-Misfoui, marrakchi in addition. 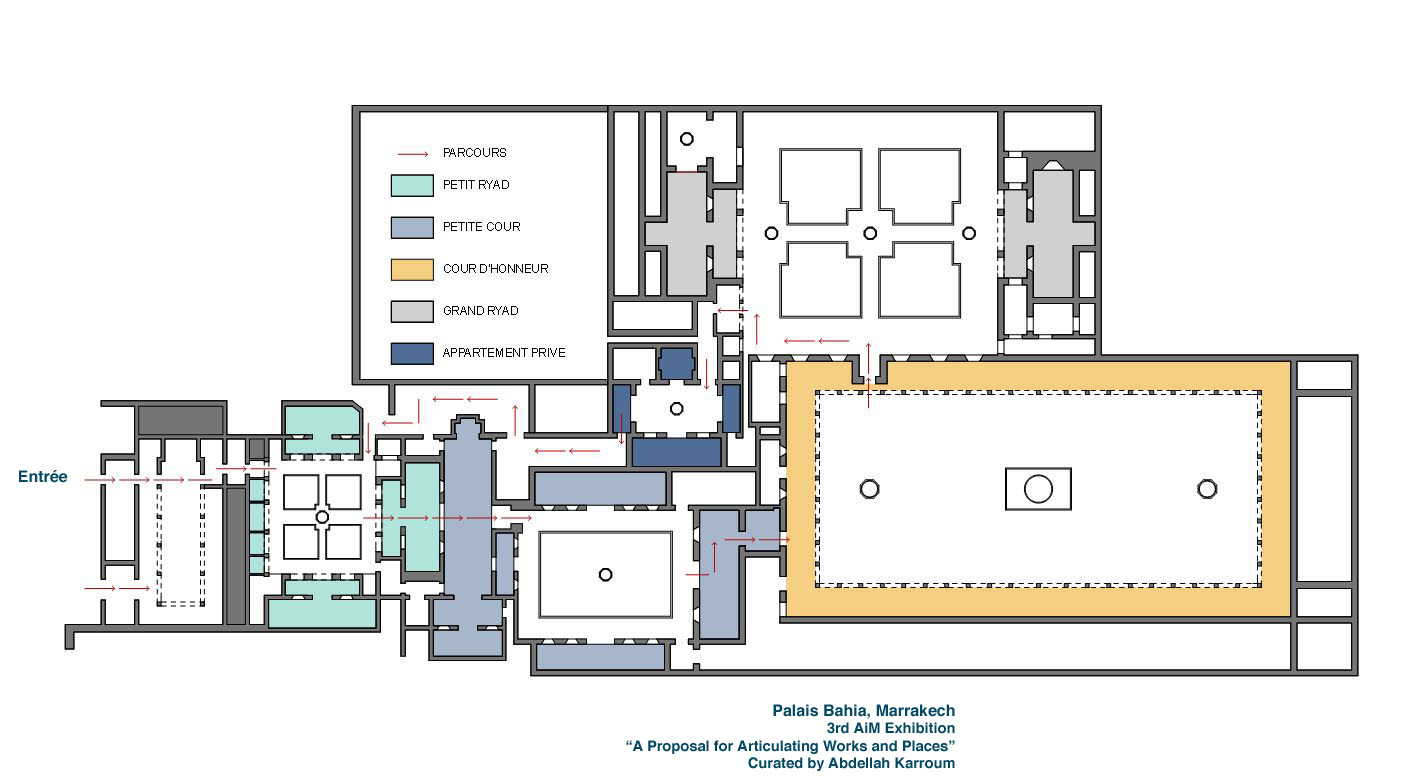 Bahmad’s desire is to build a sumptuous palace to house his 4 official wives and 24 concubines, with their children, and notably his favorite, Bahia, (meaning the Beautiful, the Bright), which probably gave its name to the palace. The complex will include a tangle of 160 richly decorated rooms, rooms, apartments, as well as a mosque, a Koranic school, a harem, a Moorish bath, stables, and Islamic gardens as well as an aguedal (vegetable garden) irrigated by a central basin. 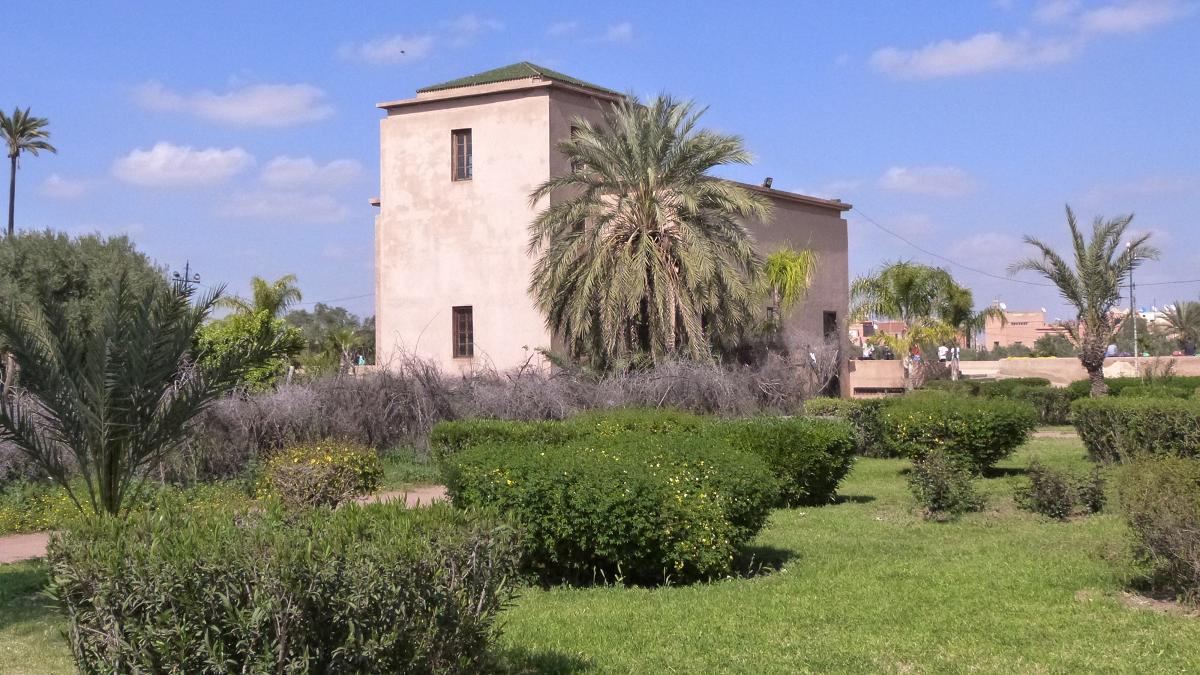 The agdal ba Hmad was located in the place of the current garden Jnane Ben Chegra or Garden of Bâb Aghmat. Recently rehabilitated and replanted, the Aguedal is accessible from the street that runs along the Jewish cemetery to the east of the Jewish district “Mellah”. 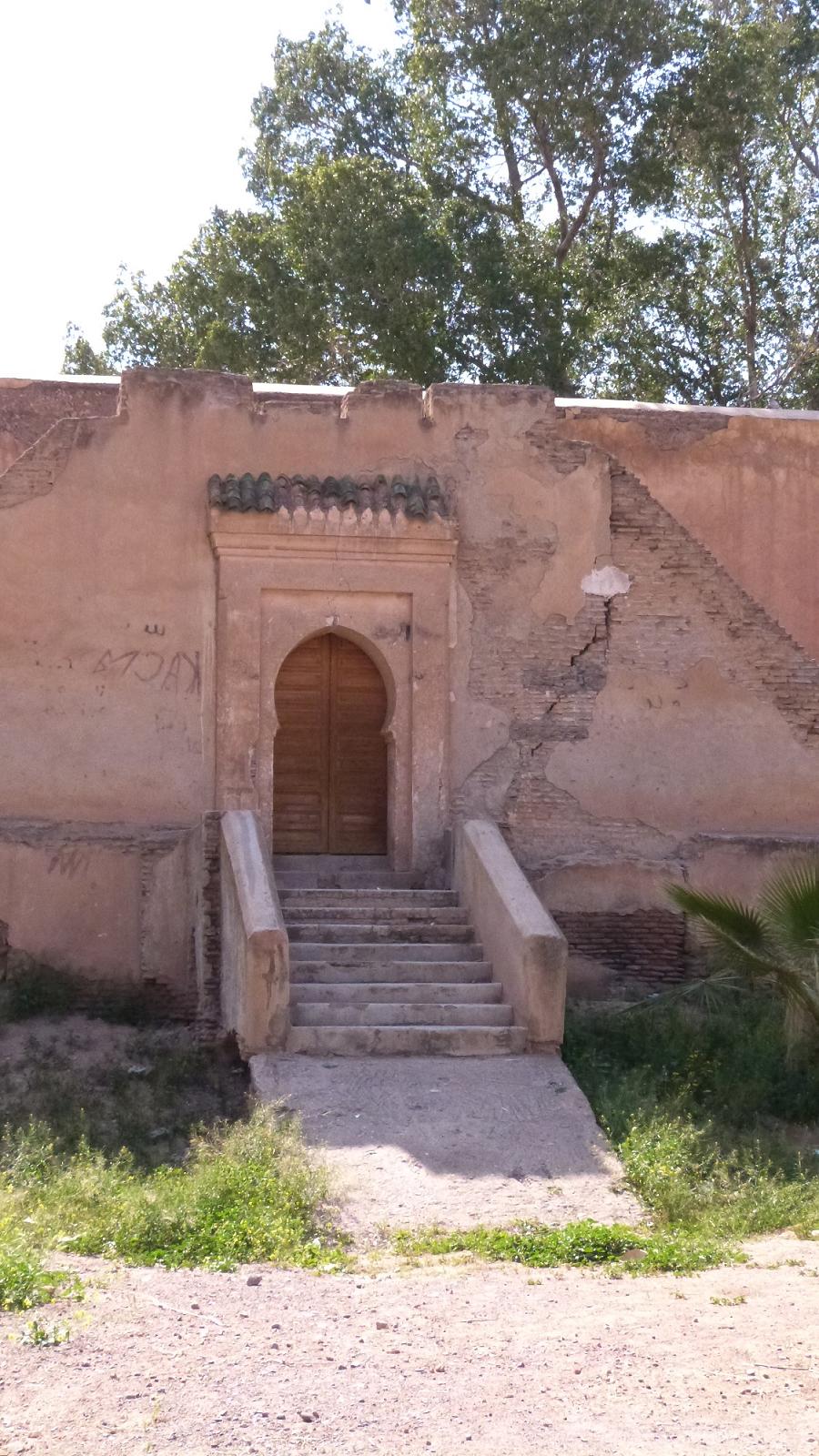 The door leading to the Bahia Palace on its east coast is very clearly visible in this aguedal. During 7 years of works, the best craftsmen of Morocco will realize carved and painted cedar ceilings, tiled floor of mosaics – ceramics and marble, stucco and sculptures on plaster, Iraqi glass windows…

It is at the same time that major architectural works are built such as Dar Batha and Dar Glaoui in Fez, Dar Benani in Méknes… or Dar Si Said in Marrakech, by Si Said (“Mr” Said), who is none other than Ba Hmad’s brother. 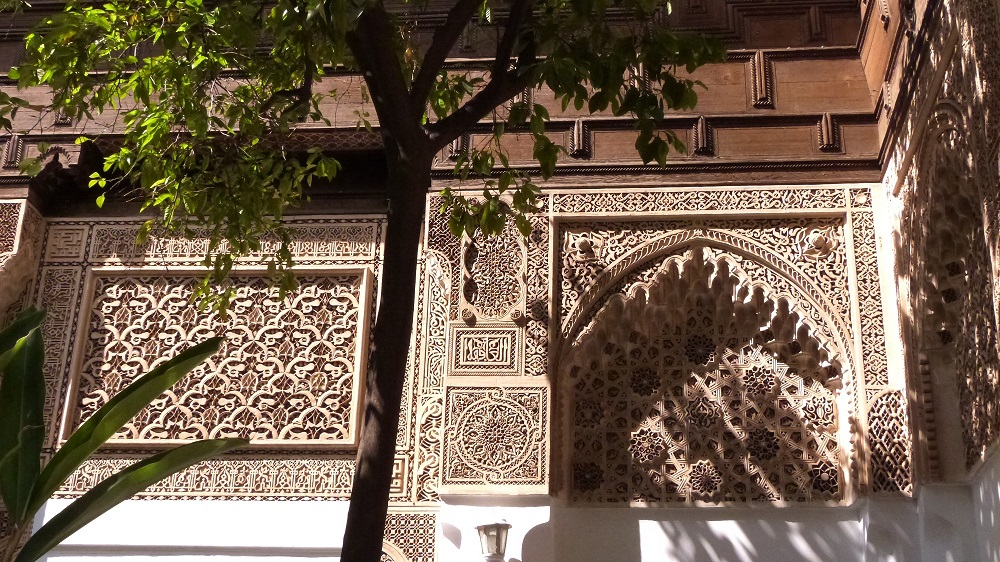 4/ The Largest Palace in the Kingdom

At its height, the Bahia Palace Marrakech extends over 8 hectares. It is in its time the largest and most sumptuous palace of all Morocco. It constitutes a singular testimony of Moroccan architectural art. Entirely of plain foot has the time of Ba Hmad, it is articulated like aopen sky mazearound an alternation of Riads, courtyards and patios trees of cypresses, jasmines, banana trees, orange trees and olive trees and decorated with refreshing fountains. It also includes a mosque, a Koranic school and a huge vegetable garden overlooking the Atlas Mountains. The whole does not have a precise structure but rather constitutes a heteroclite set of alleys and labyrinths

On the political level, Sultan Abdelaziz ben Hassan, did not have the education to govern and remains confined in his palace, by the Grand Vizier. Still young, he spends time playing tennis, organizing parties, especially in the gardens of the agdal, very close to the palace of Bahia and has a pronounced taste for novelties from Europe, at exorbitant cost : cars, pianos…

But in 1900, the Grand Vizier Bahmad died in mysterious conditions. The Sultan then takes back the power on the throne, inexperienced and advised by Europeans who abuse it, and following unpopular modern reforms and a way of life which distances it from its people, Morocco enters then in a period of political troubles and riots.

The Bahia Palace Marrakech knows dark hours. It was during these years of political crisis and tribal rebellions led by Bou Hmara (literally “man who have a donkey“) or El Hiba in Marrakech, which occupied the city and whose supporters occupied some rich houses, including the Bahia Palace, which was ransacked and looted of its luxurious furniture. 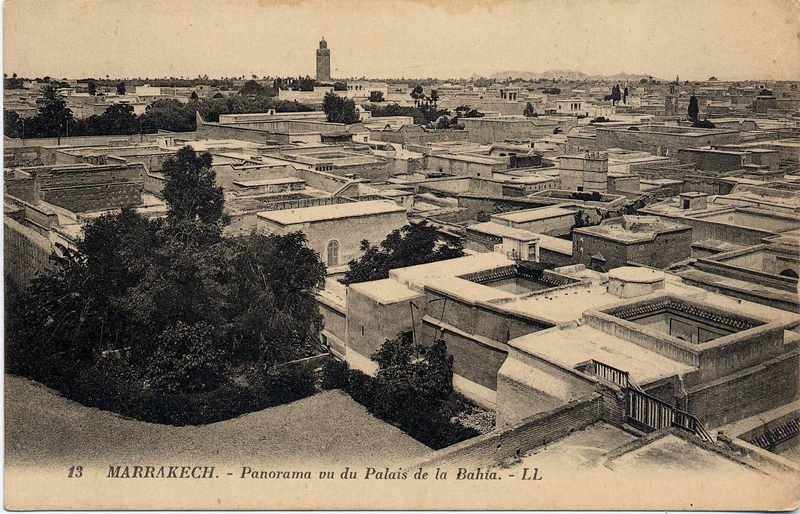 5/ Occupation of the Bahia Palace during the Protectorate

In front of the colonialist appetites of old Europe, as well as the financial difficulties of the Cherif kingdom (Cherif : descendant of Mohammed) which was crumbling under debts, and after the Algeciras treaty in 1906, France increased its influence over Morocco within the framework of the “protectorate“. Lyautey occupied Oujda, Hafid ben Hassan, brother of Abdelaziz ben Hassan, became Sultan in 1908. In 1912, after Fez, the capital of Morocco became Rabat. Lyautey is appointed 1st General Resident in Morocco, in Rabat. The new Sultan Moulay Youssef Ben Hassan, is the son of Hassan I and Brother of the former Sultan. 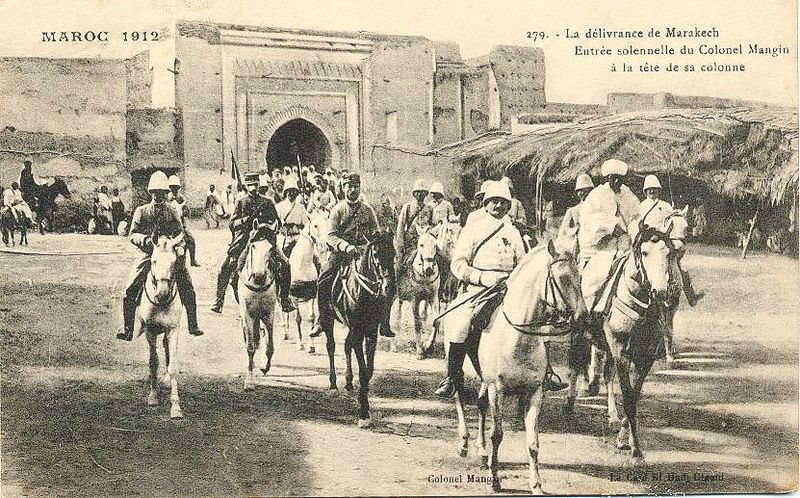 Lyautey pacifies Morocco until the South where he makes a triumphal entry in Marrakech on October 1, 1912. It is in the Bahia palace that General Lyautey set up his general residence in Marrakech.

Discover the Article about the What to See in the Medina ?

Lyautey discovers the pleasures of palaces and gardens in Morocco. History reports sumptuous festival scenes where beautiful cars, champagne and beautiful people circulate in the magnificent Palaces of Morocco and Marrakech.

It is in Marrakech, in another Palace, in this case the Palace of Dar el Bacha, that, the same year, Tami el Glaoui is named Pasha of Marrakech by a Dahir (royal decree) of Sultan Moulay Youssef. The Pasha El Glaoui, who welcomed his European friends at the Bahia Palace, was driven out to make way for the residence in Marrakech of the French general Lyautey. 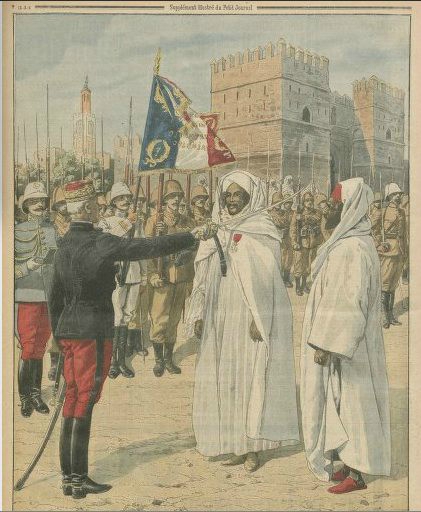 Comfort improvements are made in the Bahia Palace with the addition of fireplaces for the cool winter nights of Marrakech as well as electricity. The Palais de la Bahia was occupied by the French general staff who installed their officers there. 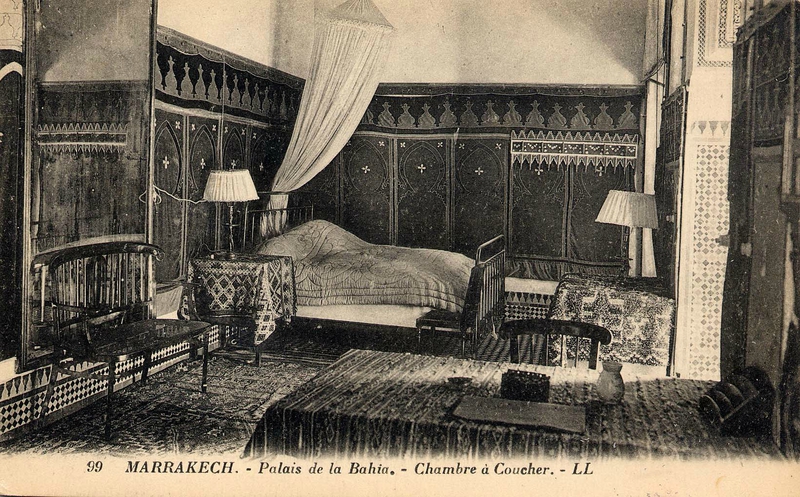 On the cultural level, General Lyautey has a strong interest in the implementation of a cultural policy with the creation of the administration of Antiquities, Fine Arts and historical monuments (archaeological excavations, surveys, safeguards…) to preserve the heritage of Morocco, he also launches many works of roads and railways to develop the country.

7/ The Visit of Bahia Palace in Marrakech

a/ The Grand Riad

The oldest part, it consists of a vast interior garden, overlooking 2 niches and 2 large rooms. The refined decoration honours Moroccan earthenware – zelliges as well as carved and painted plasters. The ceilings are made of cedar wood with painted patterns. 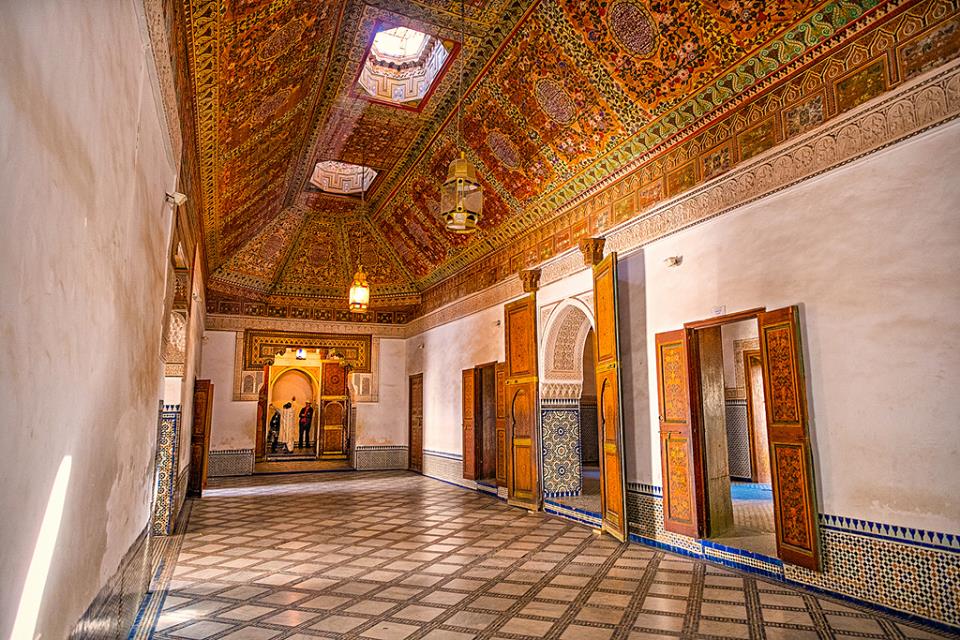 b/ The Grand Courtyard

Originally converted into stables and garden, after 1894, it served as a harem where the 24 concubines of Ba Hmat and their children were settled. The courtyard, tiled in carrara marble and zelliges, opens onto the vast council room, with its Iraqi glass windows. This is the largest palace courtyard. It extends over an area of 1500m2. 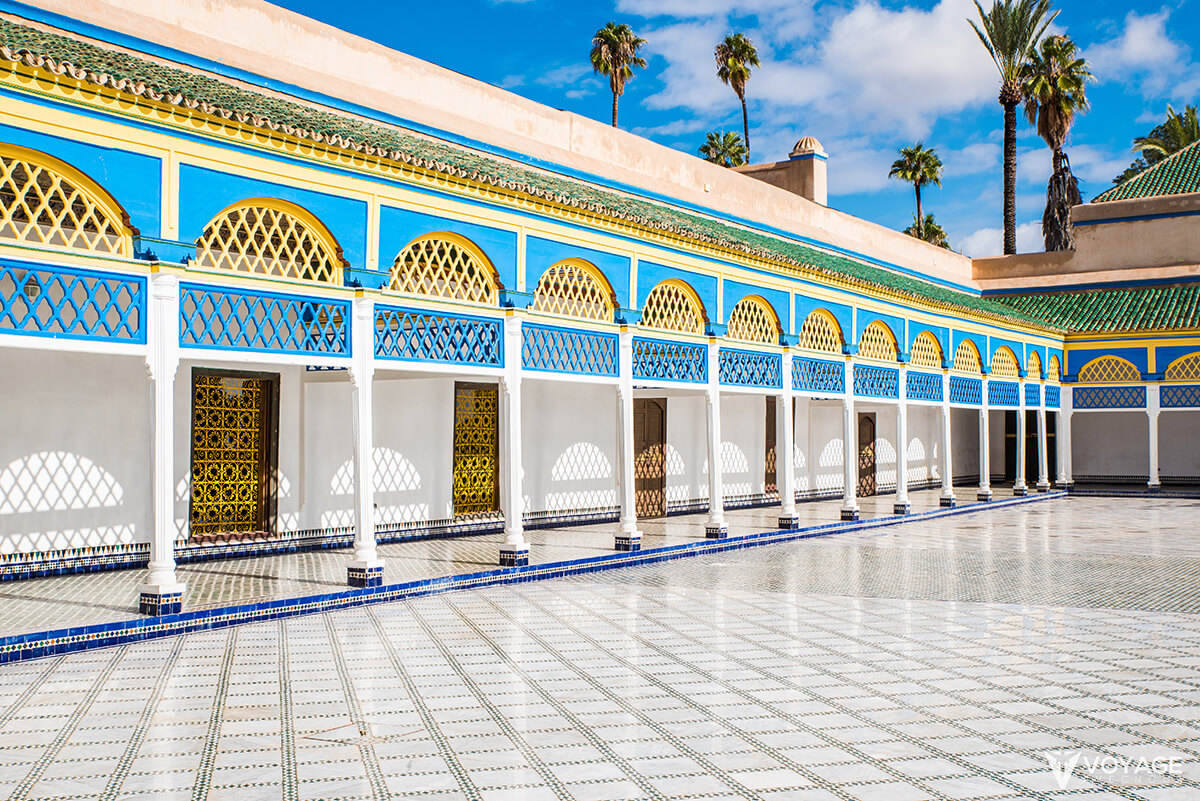 Articulated around a luxuriant garden of square shape, the small Riad is remarkable by its classical structure, its decoration and its vegetation. The Vizir Ba Hmad, in particular, receives the government in the council chamber. 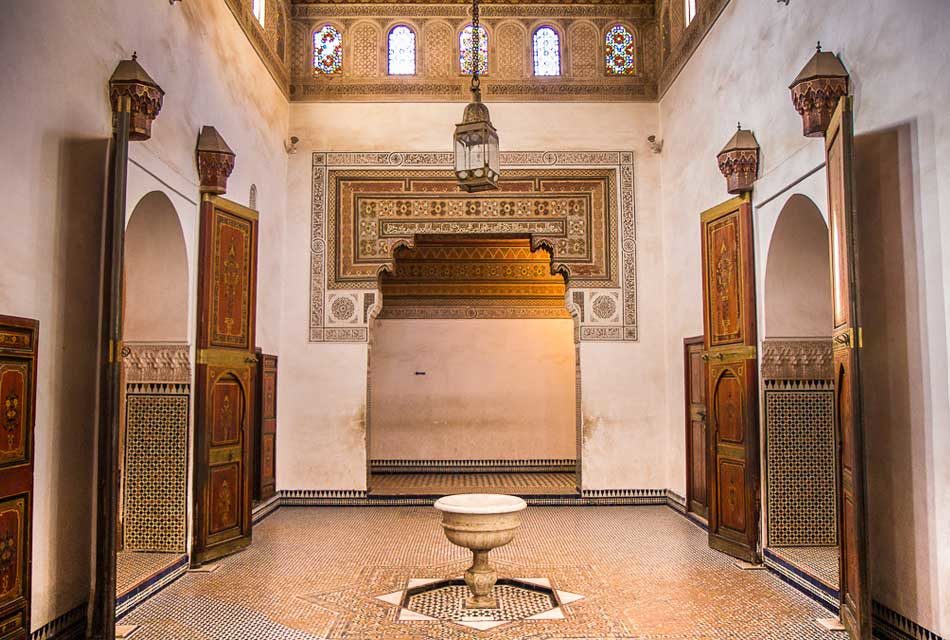 From 1912 onwards, the French Army made improvements to the Bahia Palace. Fireplaces are added for the cool winter nights in Marrakech. Electricity is also installed in the Palace. It is in the small riad that Lyautey arranges its private apartments during its stays in Marrakech. 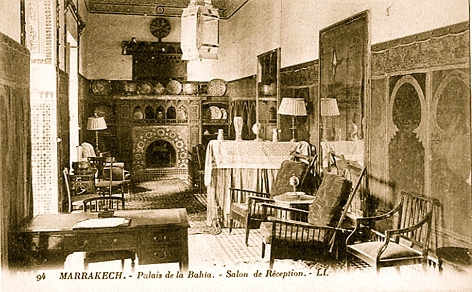 The small courtyard is more austere. It is built of white walls and a white carrara marble and zelliges floor decorated with a central fountain. The buildings are much less decorated than those of the small and large riads (with splendid woodwork and lush gardens) but still can be found cedar wood ceiling et Arabic doors. The small court was used by Ba Hmed as one of its private residence. The rooms were for his legitimate wives, particularly la Bahia. During the French occupation, the French officers were installed in 1912 in this small Courtyard. 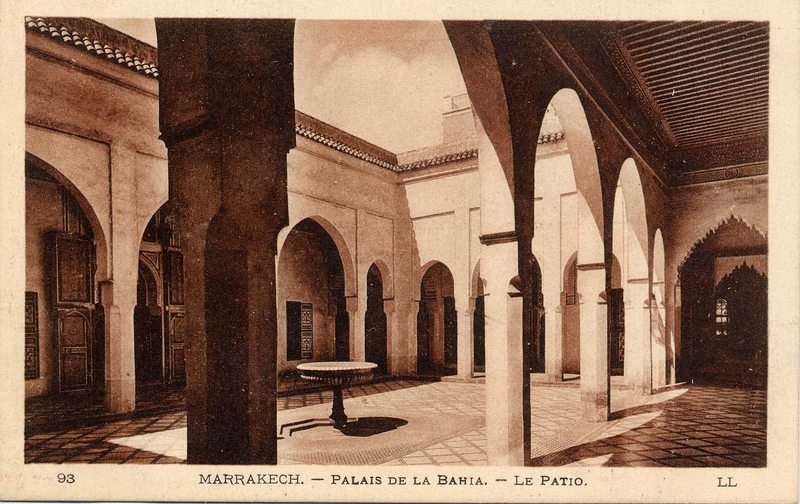 Discover the Article about El Badi Palace of the Saadian Dynasty

The Bahia Palace Marrakech, the 1st historic state monument in Morocco by its attendance, also hosts art exhibitions, such as the famous Biennale of Marrakech in 2016, as well as music concerts.

In 1964, the final scene of the French film Cent mille dollars au soleil, by Henri Verneuil and Michel Audiard with Jean-Paul Belmondo and Lino Ventura is shot in the courtyard of the Bahia Palace. 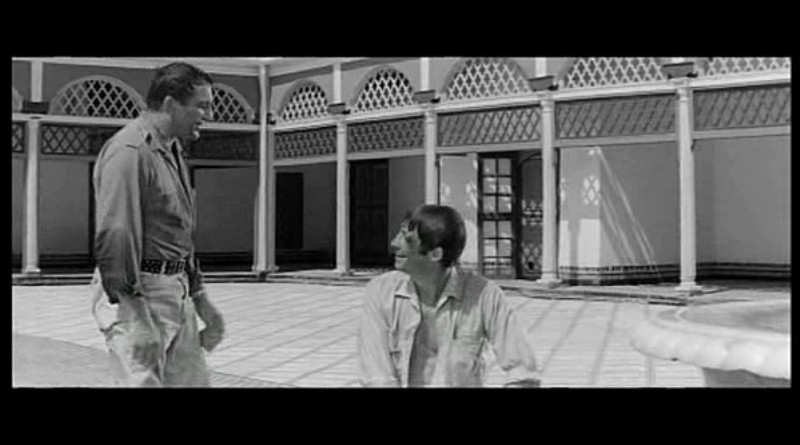 Classified as a Historic Monument by Dahir on 21 January 1924, Le Palais de la Bahia is currently the subject of a major renovation plan and it is planned that it will be placed under the management of a concessionnaire in order to develop its museum offer to international standards and meet the maintenance costs of the Building.

The Bahia Palace Marrakech is located 150m from Riad Al Ksar & Spa in the medina of Marrakech. From the panoramic terrace of Riad Al Ksar, one can see the minaret of the Mosque of the Palace of Bahia, the row of roofs, as well as the menzeh, 1st floor of the palace built on the small riad after the death of the Great Vizier Ba Hmat. 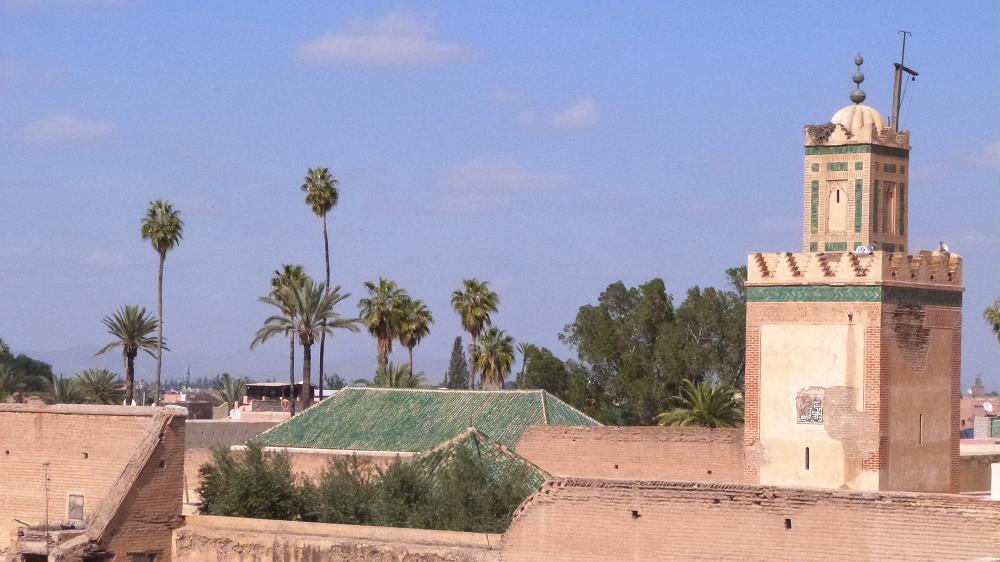