… From the sunrise to the confines of the night, the Jemaa El Fnaa Square Marrakech is strolled all day long by foreign tourists for the pleasure of the eyes and the purchase of souvenirs, and by the national tourists for Moroccan folk tales and attractions, and by many workers and trades (from the shopkeeper to the restaurant owners to the animators of all kinds).

Decried or beloved, the thrilling Jemaa El Fnaa Square Marrakech has been for centuries the heart of the Medina of Marrakech: place of justice of the ancient times, place of passage for tourists, place of Entertainment recognized by UNESCO since 2001, agora of ancient and recent cultural events.

Discover the Millenary History of the Madrassa Ben Youssef in Marrakech

1 / Jemaa El Fnaa Square : Some Geography and History Bits Up to the Present Day

The Jemaa El Fnaa Square Marrakech is located in the heart of the Medina despite its southwest peripheral location within it. Positioned not far from the Royal Palace and at the foot of the minaret of the famous Mosque of Koutoubia, after having skirted the El Koutoubia Trek where are parked the horse carriages of Marrakech, it is the starting point and the gateway to the famous souks of the Medina. 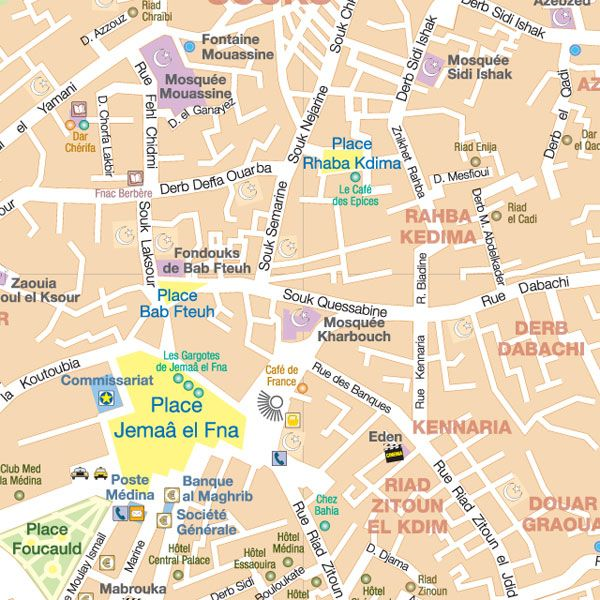 Regarding its history, very few documents exist but some snippet of the past managed to arrive till us. However a certain vagueness exists concerning the origin of its name, several hypothesis being all credible : Place of the Deceased or Place of the destroyed Mosque.

Between the 12th century and the end of the 14th, the place appears in its role of justice. Medieval writings speak of a Place or esplanade (a rhaba, rather a rahba el ksar or place of the Palace) wherethe sentences of justice has beenmade and applied : hanging and decapitation. Also note that the Palace of this time used this esplanade for military purposes and military parades.

In the 17th century, the Jemaa El Fnaa Square Marrakech appears in historical talesunder the name of Place des Trépassés (DeceasedPlace) for the first time. Name given after a epidemic plague during 9 years, from 1598 to 1607, that decimated a part of the population of Marrakech. The Sultan himself (Ahmed Al Mansour) died. He is buried in the Saadian Tombs. 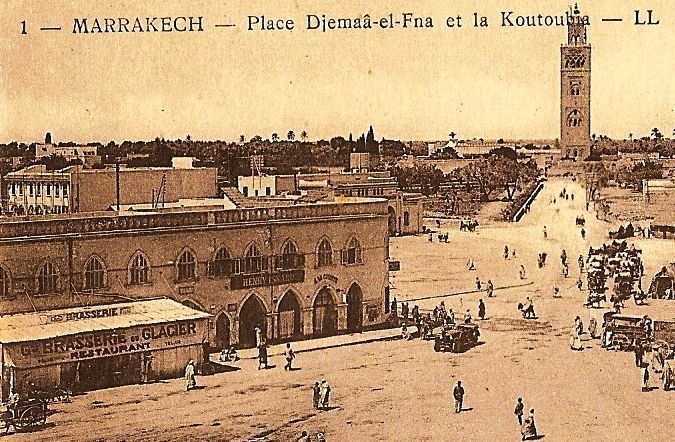 The Saadian Sultan Ahmed El Mansour had, in fact, started to build a mosque in Jemaa El Fna Square. The planned name was “Jemaa El Hana” (Mosque of Prosperity). But this project will never be achieved due to lack of funding. At the succession of the Sultan, his son Zidane did not find the finances to finalize the mosque. The place then takes the name of Jemaa El Fna (Mosque of Ruins).

From the 17th to the beginning of the 20th century, the Place is mentioned by several Moroccan or Foreign travelers as being a Place of business (shops, souks, administration of the customs) and aPlace of celebration (songs, dances, horse show) and always a Place of justice (execution of rebels by the authorities). 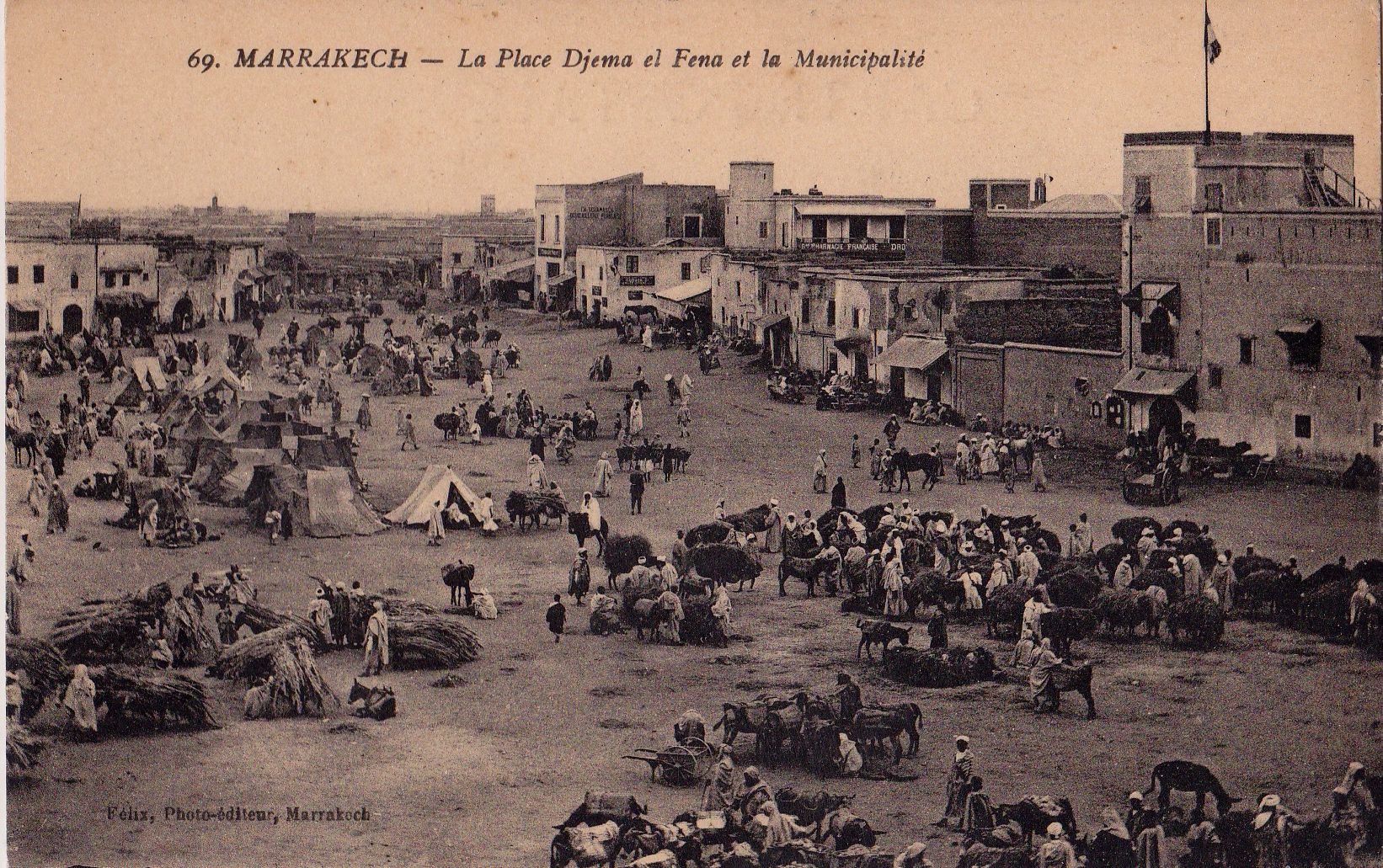 In the 50s, facing the French Protectorate, it is noted according to the texts and songs of the time, the central role of the Place for the Moroccan resistance should be noted.

Already in 1921, the beginning of a preservation of the heritage of the Place made its way through the promulgation of a vizierial decree (under the aegis of Marechal Lyautey) ordering the classification of the place in the sites list to safe and regulate the Morocco. In July 1922, a dahir (decree of the Sultan) submits the place to a servitude non aedificandi, or non-construction of any building : the show is on the Square and not in its surrounding architecture.
In 1985, not only Jemaa Efna Square but also all the Medina of Marrakech are listed and classified as World Heritage by UNESCO, https://whc.unesco.org/en/list/331/, and 2001 the Place is proclaimed oral and intangible heritage of Humanity. 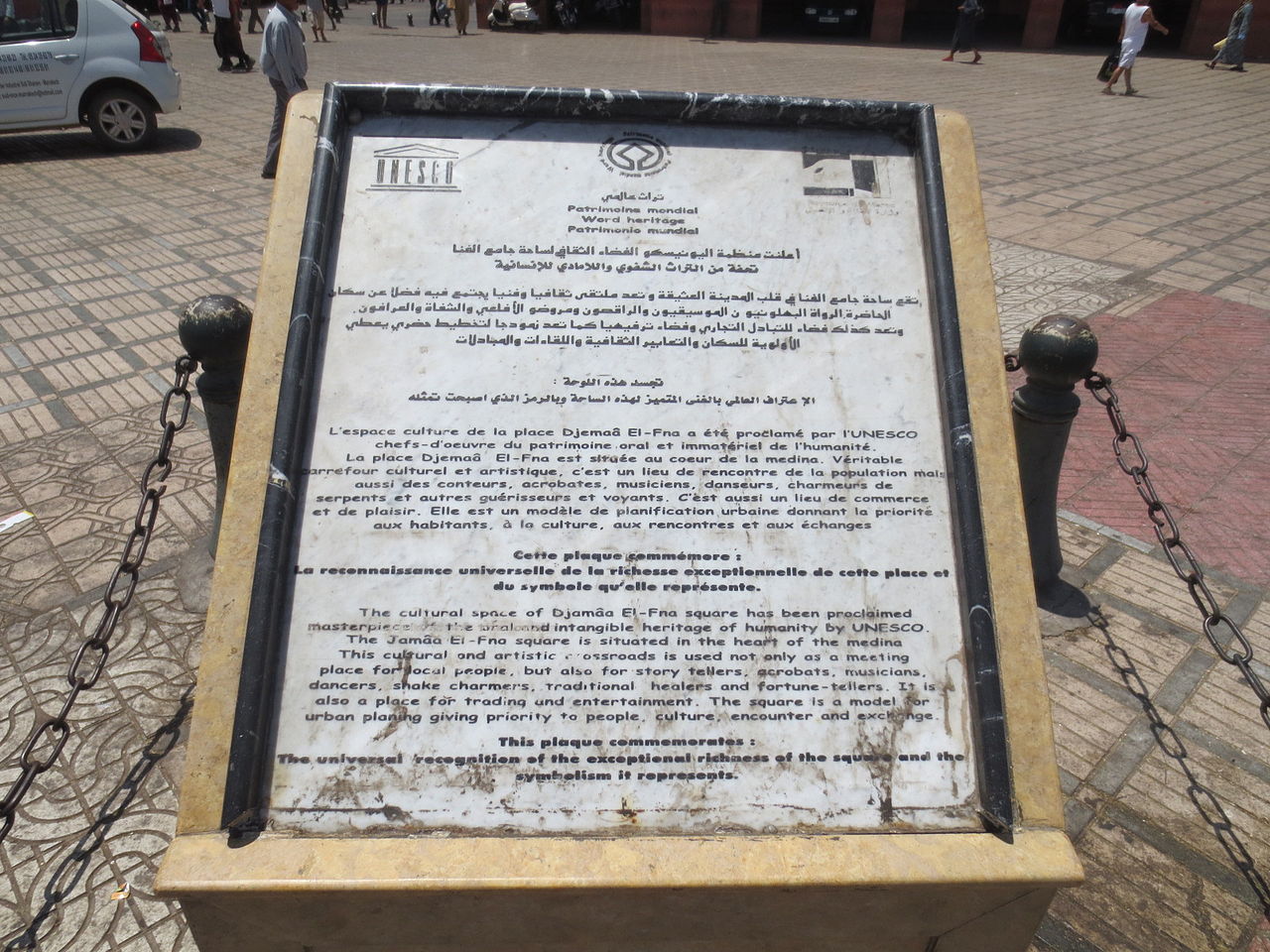 – Songs, dances and music
Several troops compete for the pavement, dressed in costumes and various décorative items corresponding to their régions. Among the best know, the Gnaouas of Sudanese origin, who thank to their instrument rattlesnake / castanets (qraqeb) and their lute, intoxicates the spirits of African rhythms up to the trance.
– Street comedy theater
Whether solo, duet or small troupe – comedians hijack with satire recent events or daily life. To note amongst the most known, Malik Jaloq, Flifla, or Baqchich
– Klams or mystical words
A consistent tradition of saying stanzas, versified verses of characters in ecstasy or illumination. To note the famous halqa of Cherkaoui with its tamed pigeons
– The acrobats
As famous as the Gnaouas, these troops of Berber acrobats of origin of the plain of Souss (big Agadir), also called Hmad or Moussa, realize feats of human pyramid.
– The animal show
Essentially the monkey trainers and the famous tribe of Aissaoui, snakes charmers to the sound of the flute (guayta) 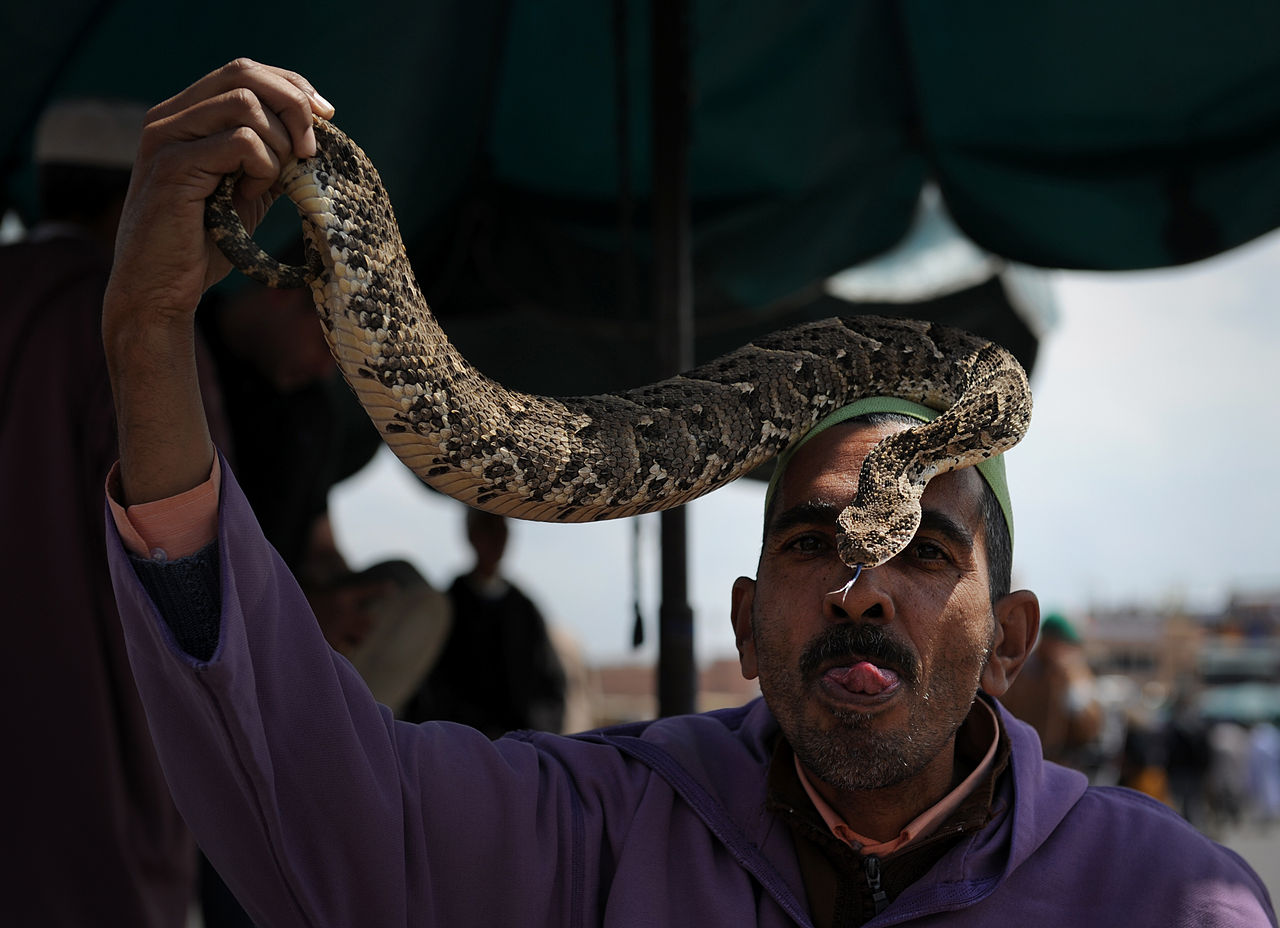 – Traditional medicines and pharmacopoeia
Saharan herbalists (preparing natural ointments in accordance with ancestral rules), healers of all kinds, teeth pullers are always present in the Square despite the lack of interest that local and tourists bring to them.
– The counts
Number of 20 in the 70s, they are now only 5 today and are forced to practice a second job because of strong compétition of TV. Note amongst the most famous : Mohamed Bariz, Abderrahim El Maqouri 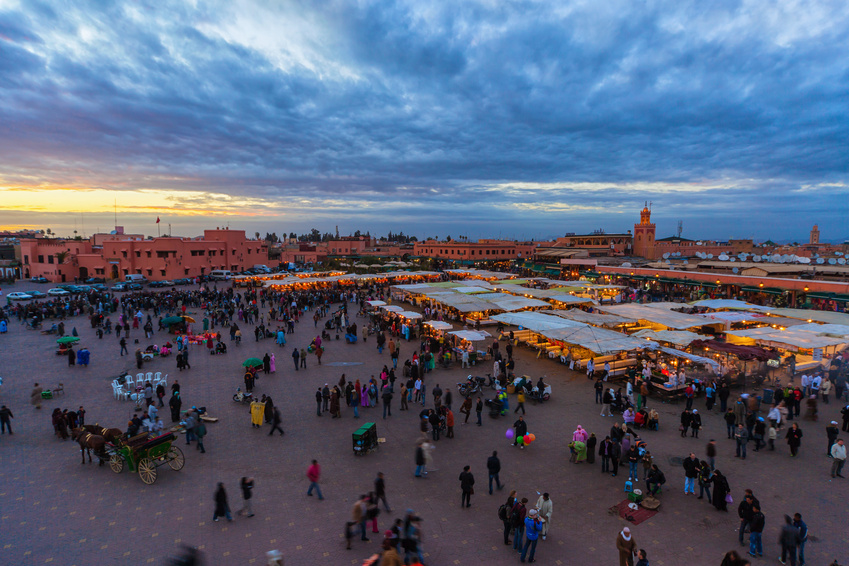 – The seers, naqachat and public writers
Exercised by women, they read in the lines of the hand or in the cards the destiny, or tattoe the palms of hand of delicate motives varied by hand. Note the rare presence of public writers, but endangered

Discover the Koutoubia Mosque, Dating from 1120

Apart from a meeting with the artists mentioned above, the Jemaa El Fnaa Square Marrakech is also an esplanade of life, a lung of the Medina and a point of passage for tourists.
It is lined on both sides:
– Cafes, hotels, restaurants, the most famous of which is Le Café de France on its eastern side
– Shops, bazaars, entry point to the souks in its northern part
– A small park (Place Foucault), the row of horse carriages waiting for tourists to the south (trek el Koutoubia) at the foot of the esplanade of the Koutoubia Mosque
– Administrative buildings: district Wilaya, police station, post office, Guessabine Mosque
– A gardeners’ square, gathering practically all the nurserymen of the Ourika Valley in the west 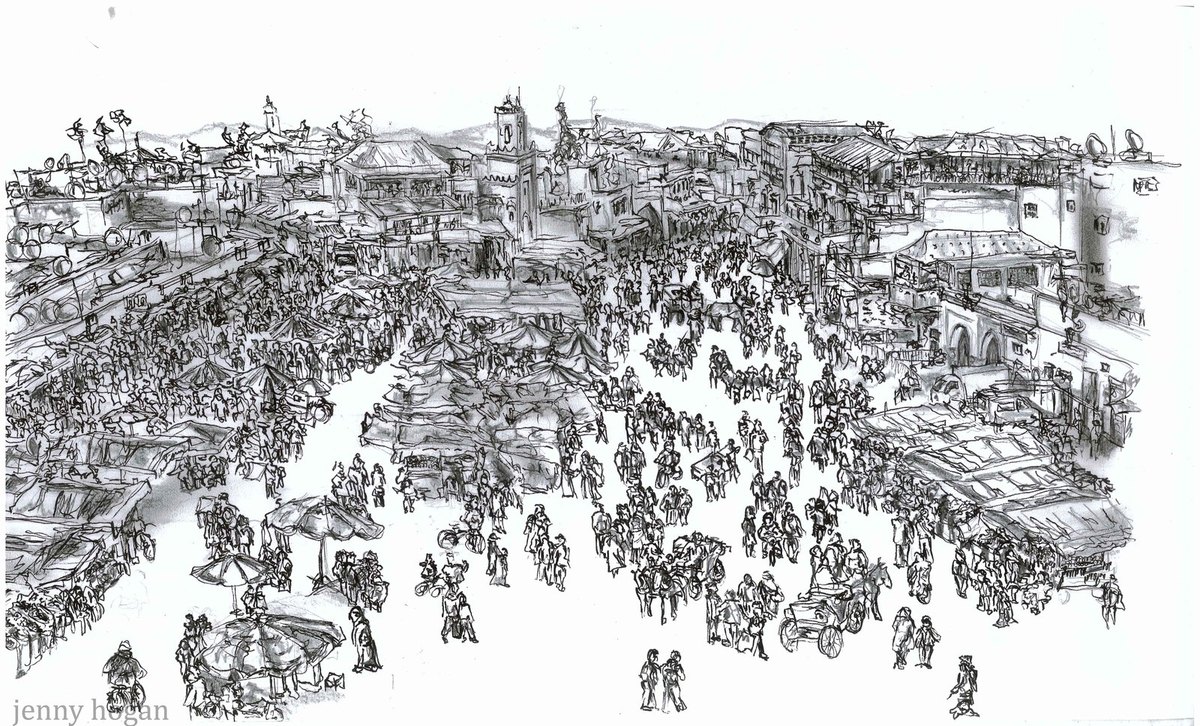 On the square, destined for foreign and national tourists, there is a mixture of:

– Carts of dried fruits (figs, apricots), peanuts and other nuts of the Kingdom (pistachios, almonds, …)
– Carts of fresh orange juice, grapefruit and lemon and other seasonal fruit juices (pomegranates, melon, watermelons)
– Carts of Moroccan spices and saffron
– Mobile and ephemeral restaurants or Gargottes to taste typical Moroccan dishes, grilled meats, and even Moroccan snails (from 17h until 1am usually).
– Carts of music, selling tapes, cd roms and DVDs of Moroccan song
– Sellers on the hustle or not, selling counterfeits, unsold items from nearby souks, and other gadgets

Since 2001, the Jemaa El Fnaa Square Marrakech with other venues, is part of the famous International Film Festival of Marrakech. An immense grandstand with a giant screen dominates the southwestern part of the square and transforms it into a gigantic cinema hall at the time of the festival taking place in December. Popular film screenings are broadcast and / or receive big screen stars, attracting thousands of Moroccans and foreign tourists who are fond of this festival. 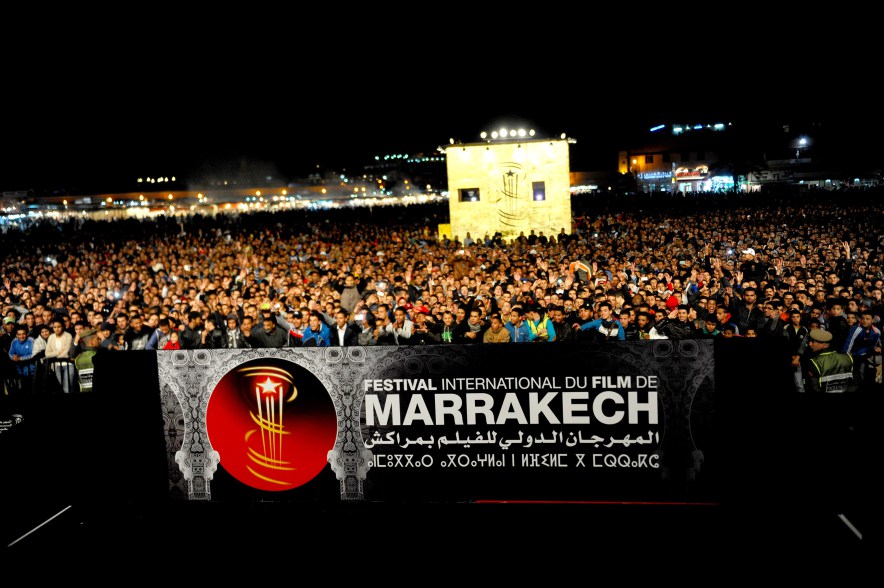 And since the end of 2017, as part of the first edition of Stars in the Jemaa El Fnaa Square Marrakech, a musical event aiming to be annual and inviting major names in the music scene, the Djeema El Fna Square under the aegis of King Mohammed VI becomes a huge stage in concert for a free show for the Moroccan public and tourists.