… The Madrassa Ben Youssef of Marrakech is a Historical Monument of Islamic Art built in the 16th century, but its origin is much earlier. The site is dated back to the very foundation of Marrakech, 1000 years ago!

The Medersa Ben Youssef, the largest Madrassa in Morocco, has known the Glory days of Marrakech over several Dynasties. Discover the saga of one of the most beautiful heritages of Islamic art in Marrakech. 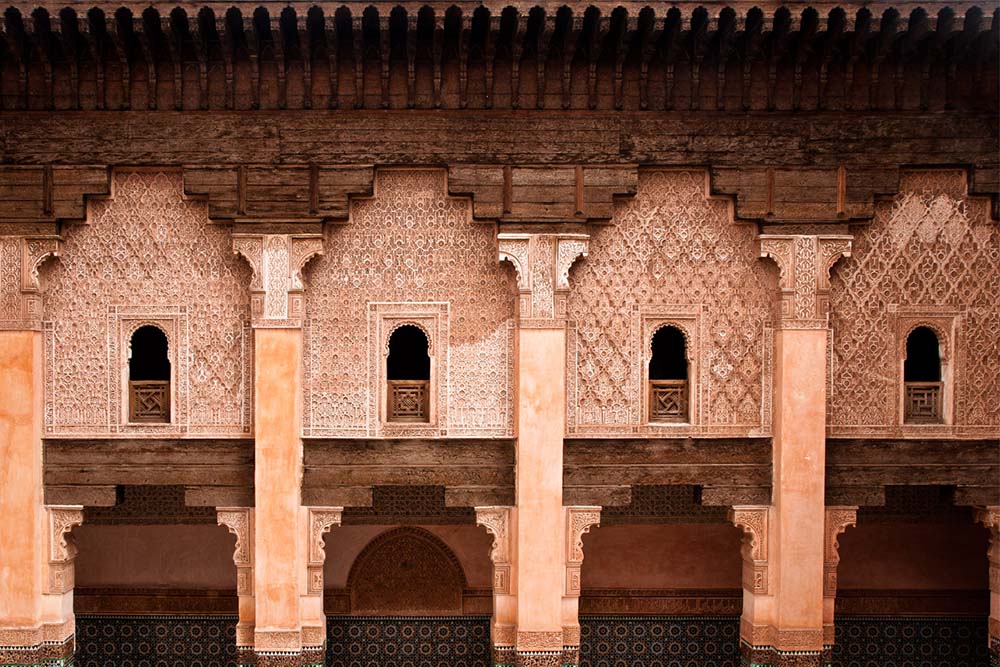 1/ Almoravid Origin of the Name of the Madrassa Ben Youssef

During the 12th century, Youssef Ben Tachfine (born in 1009 / + 1106, at almost 100 years old!), was the first Berber Almoravid Sultan. At the time, Morocco was a powerful and immense country. It extends to the south, over present-day Mauritania, part of Mali and Senegal. In the north in Andalusia and the Valencia region. To the east, over part of present-day Algeria. The invasions in Spain will be launched from Marrakech.

Youssef Ben Tachfine founded the Almoravid dynasty. He also founded the city of Marrakech, chosen as its capital, around 1062-1070, and is also the sponsor of the Ben Youssef Mosque in Marrakech. He died in 1106 and his mausoleum is located near the Koutoubia Mosque. 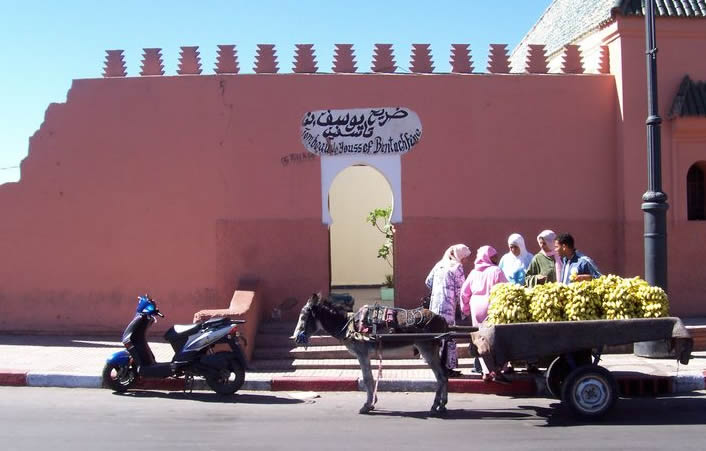 Ali Ben Youssef (ben = son of), son of Youssef Ben Tachfine, is the 2nd Sultan of the Almoravid Berber Dynasty. He reigned over Morocco from the age of 23, in 1106, until 1143. He was the one who fortified Marrakech, the capital. The Ramparts built in 1122 are still in existence.

Ali Ben Youssef was also the builder in 1120 of the Mosque before the Koutoubia and an adjoining palace. He had the Ben Youssef Mosque built by his father enlarged between 1121 and 1132. It will have his name on it forever ! 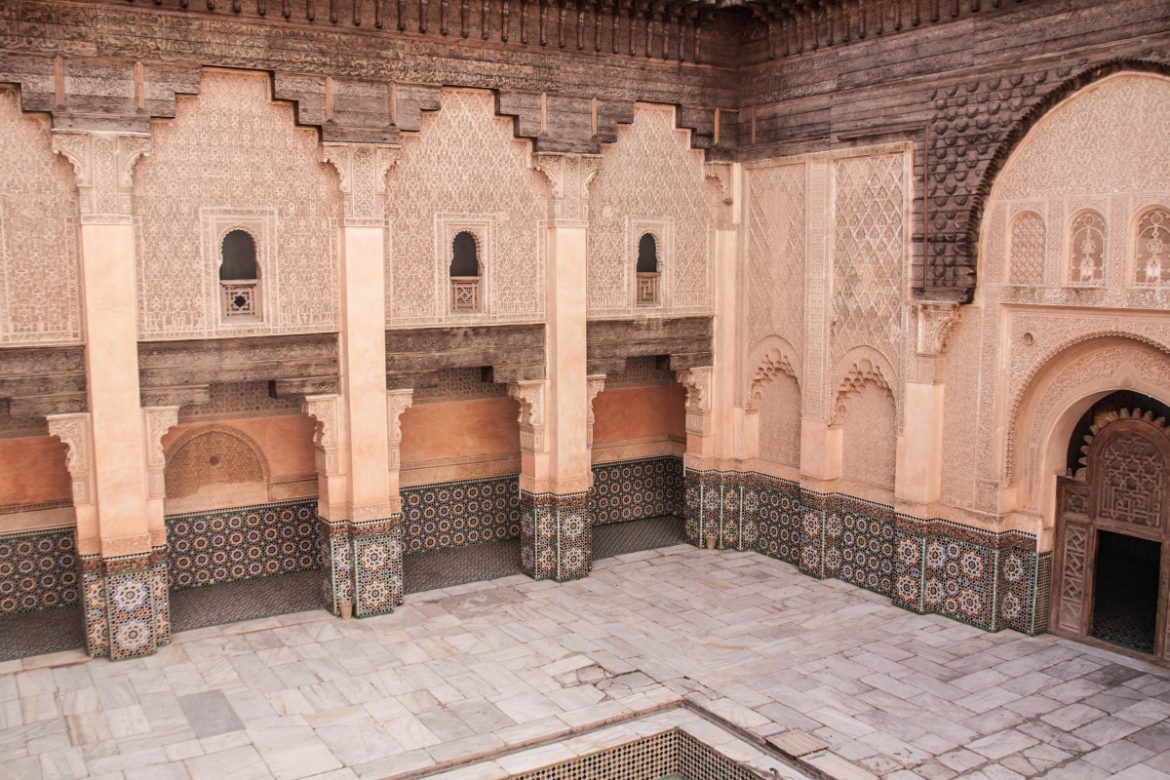 2/ Construction of the Madrassa Ben Youssef under the Merinids & Saadians

a/ The Madrassa Ben Youssef of the Merinid Dynasty

After the Almoravid dynasty in the 11th and 12th centuries, the Almohads developed Marrakech in the 12th and 13th centuries, notably by building the Koutoubia Mosque on the ruins of an Almoravid palace from 1141 to 1154. In 1147, the Almohads destroyed the Ben Youssef Mosque because of a 6-degree error in orientation with respect to Mecca, as they did with the Koutoubia Mosque. But its name will remain due to the popularity of the site.
The Merinids, of Amazigh Berber origin, overthrew the Almohads in 1269 by taking Marrakech. Abu Al Hasan Ben Uthman (born in 1288 or 1299 / +1351) is the 7th Merinid Sultan. It is nicknamed the “Black Sultan” because of its dark skin colour. Indeed, her mother was a slave of Ethiopian origin.
In the 14th century, around 1350, Abu Al Hasan founded Medersa Ben Youssef. This is the great era of madrasas construction. Politically, Abu Al Hasan attacked Gibraltar and Algeciras in 1333 and again in 1340, with the wish to revive the Almohad empire, in vain. Fez Jdid (the new one) became the capital at the expense of Marrakech.

b/ The Madrassa Ben Youssef Marrakech under the Saadian Dynasty

In the 16th century, Abdallah El Ghalib, born in 1517 and died in 1574, became Sultan of the Saadian Dynasty at the age of 40. He is the elder brother of Sultan Ahmed el Mansour, builder of the El Badi Palace, who reigned from 1578 to 1603. After a development of the medina towards the districts of Mouassine and Koutoubia, space was freed near the Ben Youssef mosque.

Saadian Sultan Abdallah El Ghalib ordered the construction of the Coranic School “Madrassa Ben Youssef” to the east of the mosque, on the site of the 1st medersa of the Marinid period. It completed its construction between 1564 and 1565. The inscriptions above the front door and on the capitals of the prayer hall attest to this. A great builder, it was Moulay Abdallah who, as early as 1558, gathered all the Jews of Marrakech in an 18-hectare district, The Mellah. He also had the great Mouassine mosque (1573), the Mouassine public fountain (1570) and the mausoleum of Sidi Youssef Ben Ali built in Marrakech. 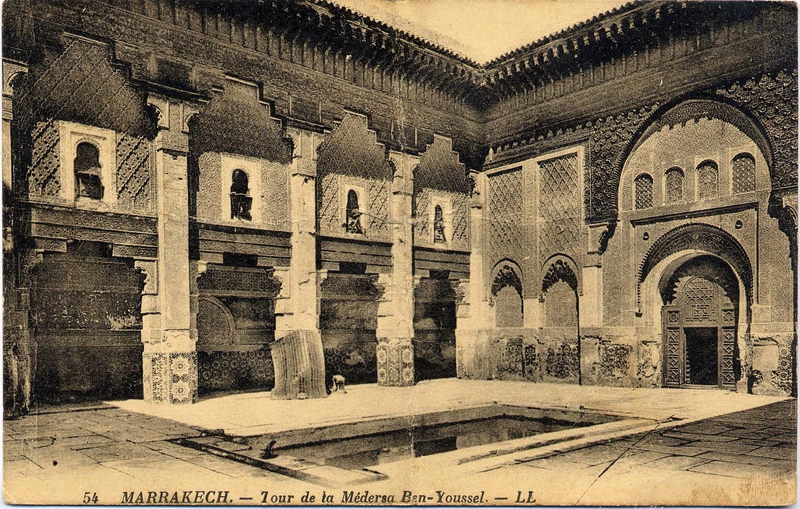 Visit Riad Al Ksar & Spa, Riad of Charm , in the Medina of Marrakesh

3/ Ben Youssef : Medieval Heritage of the Madrassas of the Merinid Dynasty

Morocco is the Muslim country with the most medersas. The construction of the madrasas in Morocco dates back to the 14th century, and is concentrated over a few decades, under the Merinid dynasty.
Builder of the primitive Ben Youssef medersa, the 7th Marinid Sultan, from 1331 to 1351, Abu Al Hasan Ben (son of) Uthman was also at the origin of the Attalaa medersa in Salé, near Rabat, also known as the Abu al Hassan medersa. 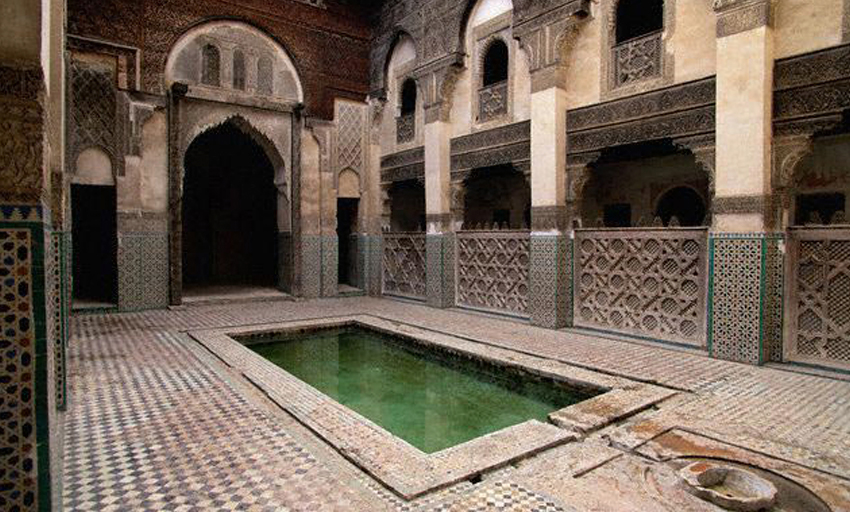 Already his Father, Abu Said Uthman ben Yaqub, sultan from 1310 to 1331, pious and pacifist, undertook the construction of many mosques and medersas. In particular in Fez, we can attribute to him the medersa Attarine 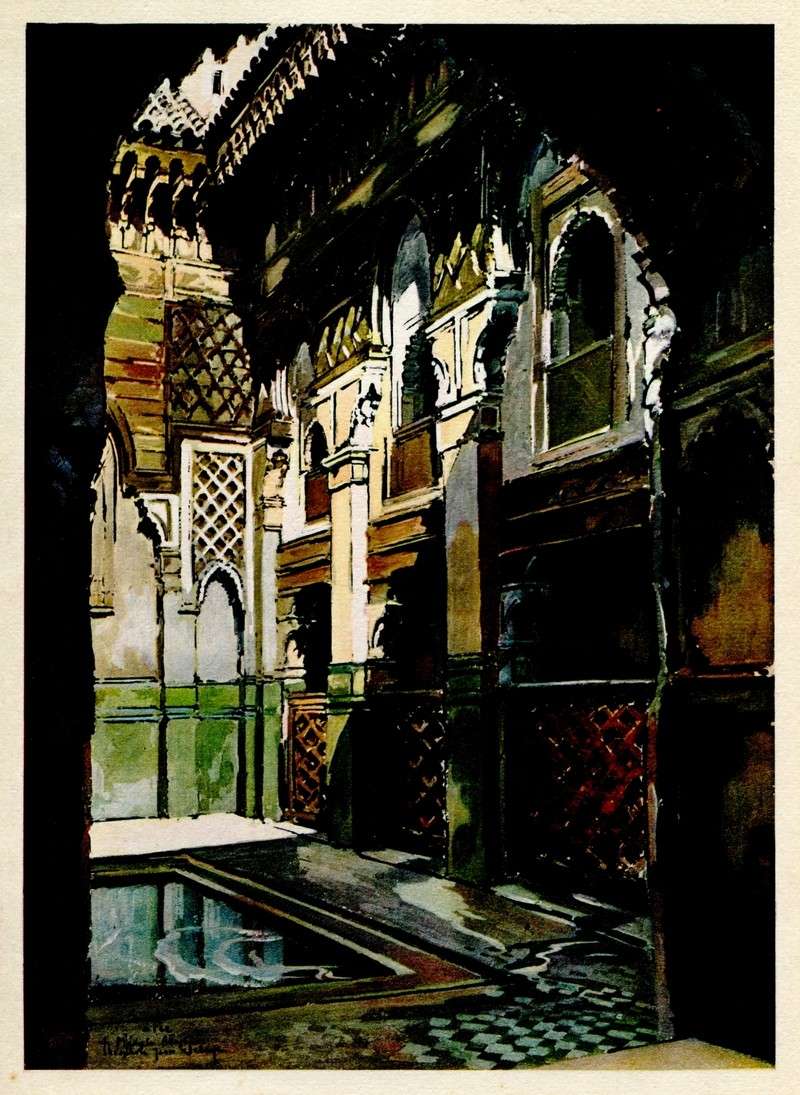 The great medersa bou inania of Fez was built between 1350 and 1355 by Abu Al Hasan Ben Uthman’s son, Abu Inan Faris. It is the only one, with the medersa seffarin, to be equipped with a minaret. Its facade is decorated with an old water clock, the mangana.

The medersa of the same name, Bou inania, this time from Meknes, was built by Abu Al Hasan but completed in 1351 by his son Abu Inan Faris. The assassination of Abu Inan Faris by one of his viziers marked the beginning of the decadence of the Merinid dynasty and the entry of the Spanish and Portuguese into Morocco. 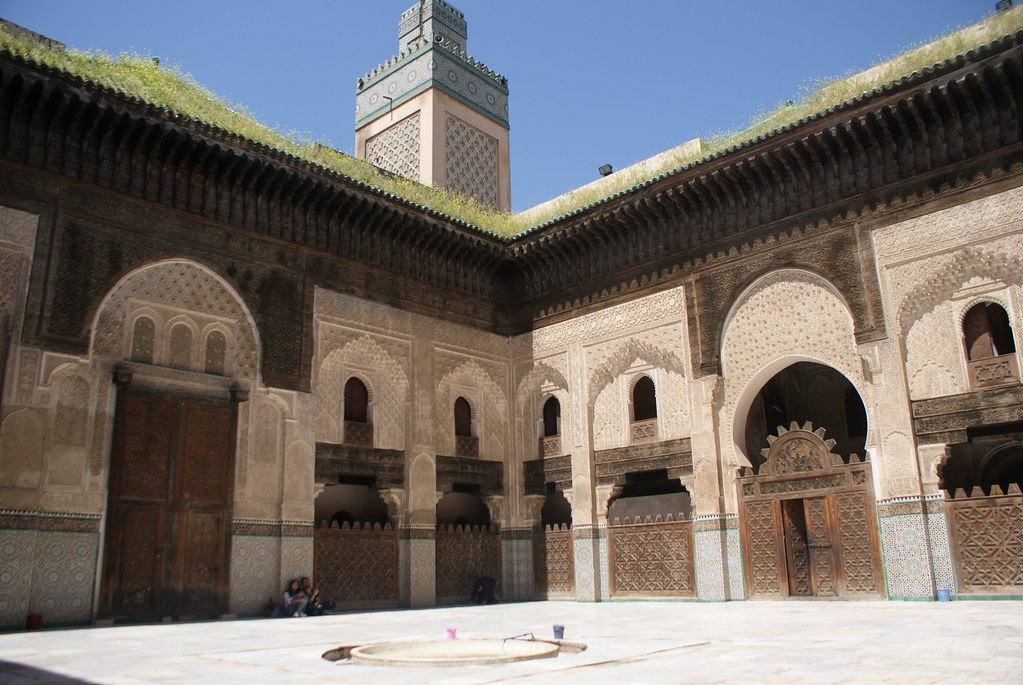 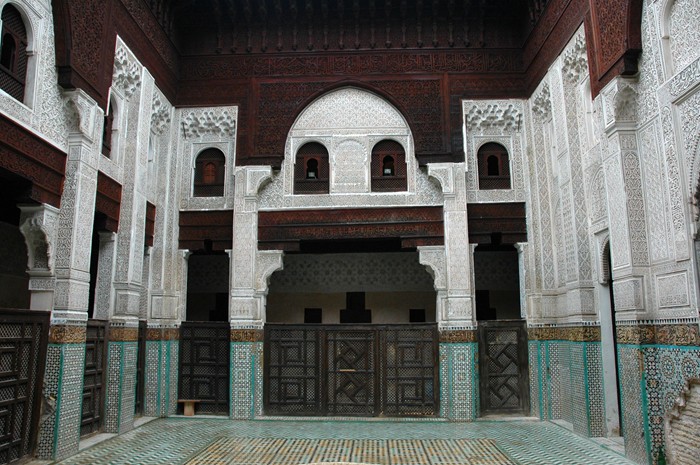 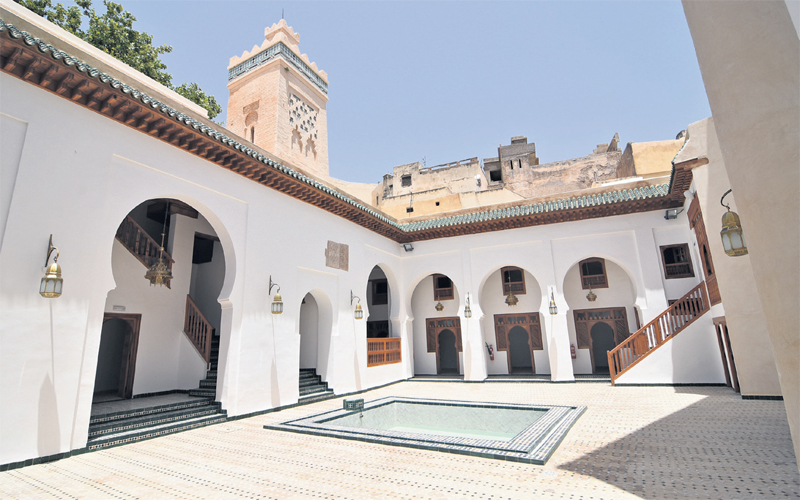 Consult the Maps of Marrakech to Download and Print

4/ Use of the Madrassa Ben Youssef

Medersa can be translated as University. However, the medersas were not coranic schools strictly speaking, but student residences, hostels for young people not living in Marrakech. Classes were held in nearby mosques. The coranic universities served as a centre for training and prayer.
The Merinids spread, through the development of the medersas, their Malikite obedience of Sunni orthodoxy, which was prohibited by the Almohads, and in reaction to the Shiism conveyed from Egypt. Marinids can thus convert nomadic populations that have not yet been converted to Islam. 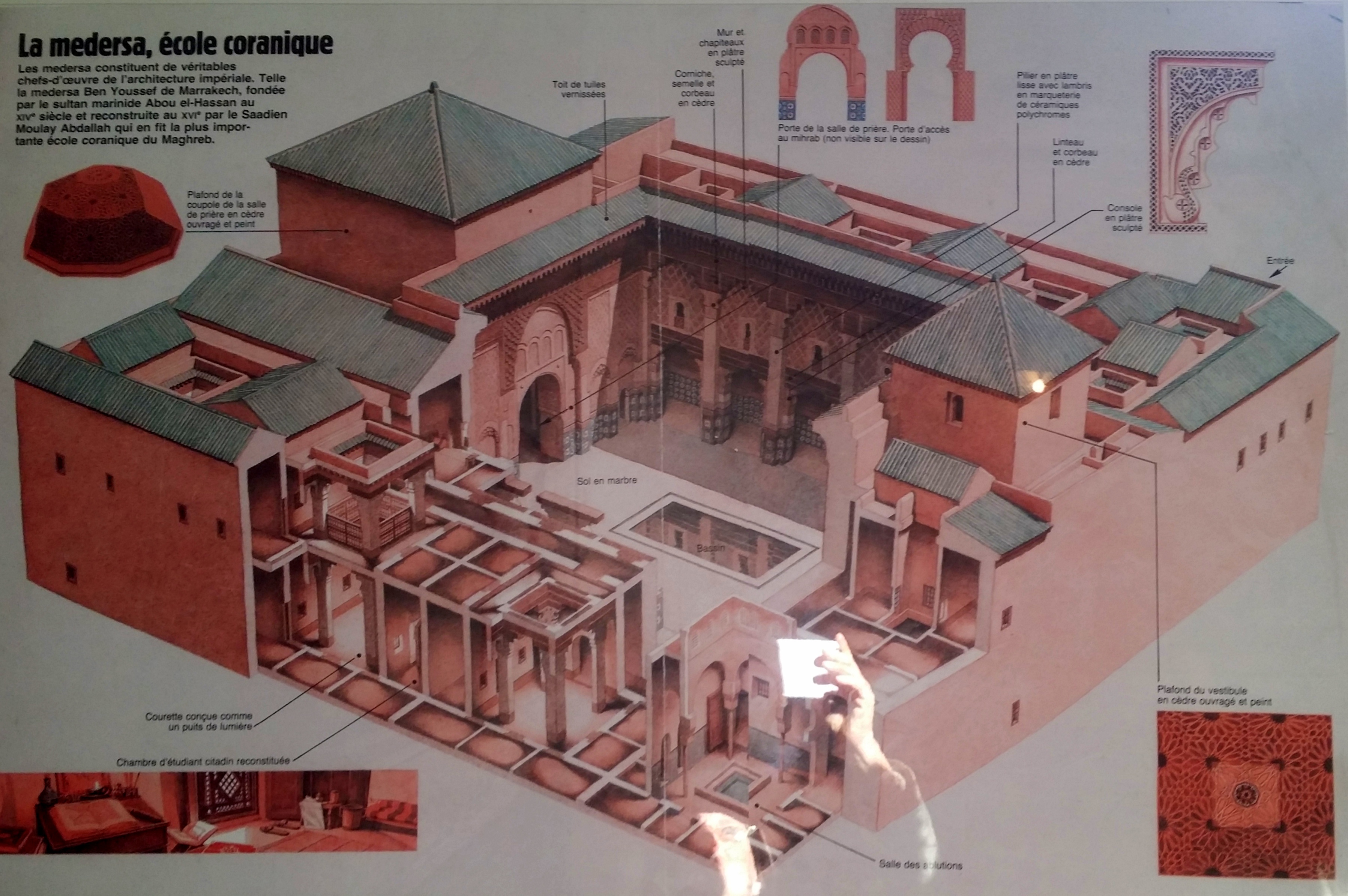 Theology was taught there, but not only. Literature, history, astronomy, medicine, mathematics, jurisprudence and science were taught in a multidisciplinary manner. It must be understood that in the Arab world of the time, literature and science were at the forefront. In philosophy, Europeans studied on the basis of translation from Arabic.
The Medersas trained the Elite capable of leading the country and representing power, like the Ecole nationale d’administration in France. Access to the medersas was by competition, and constituted a prestigious path of social evolution. The students were funded by wealthy protectors.

5/ Layout of the Medersa Ben Youssef

With a quadrilateral plan and a floor area of 1680 m2. It is the largest in Morocco. Medersa Ben Youssef had 132 rooms for students from outside Marrakech and could accommodate up to 900 students, including 100 foreigners. Medersa Ben Youssef was used as a university campus where students lived, studied and slept. It was next door, in the Ben Youssef mosque, that the teachers taught. For 4 centuries, students were welcomed there. It was restored in 1950, closed in 1960 and reopened to the public in 1982. 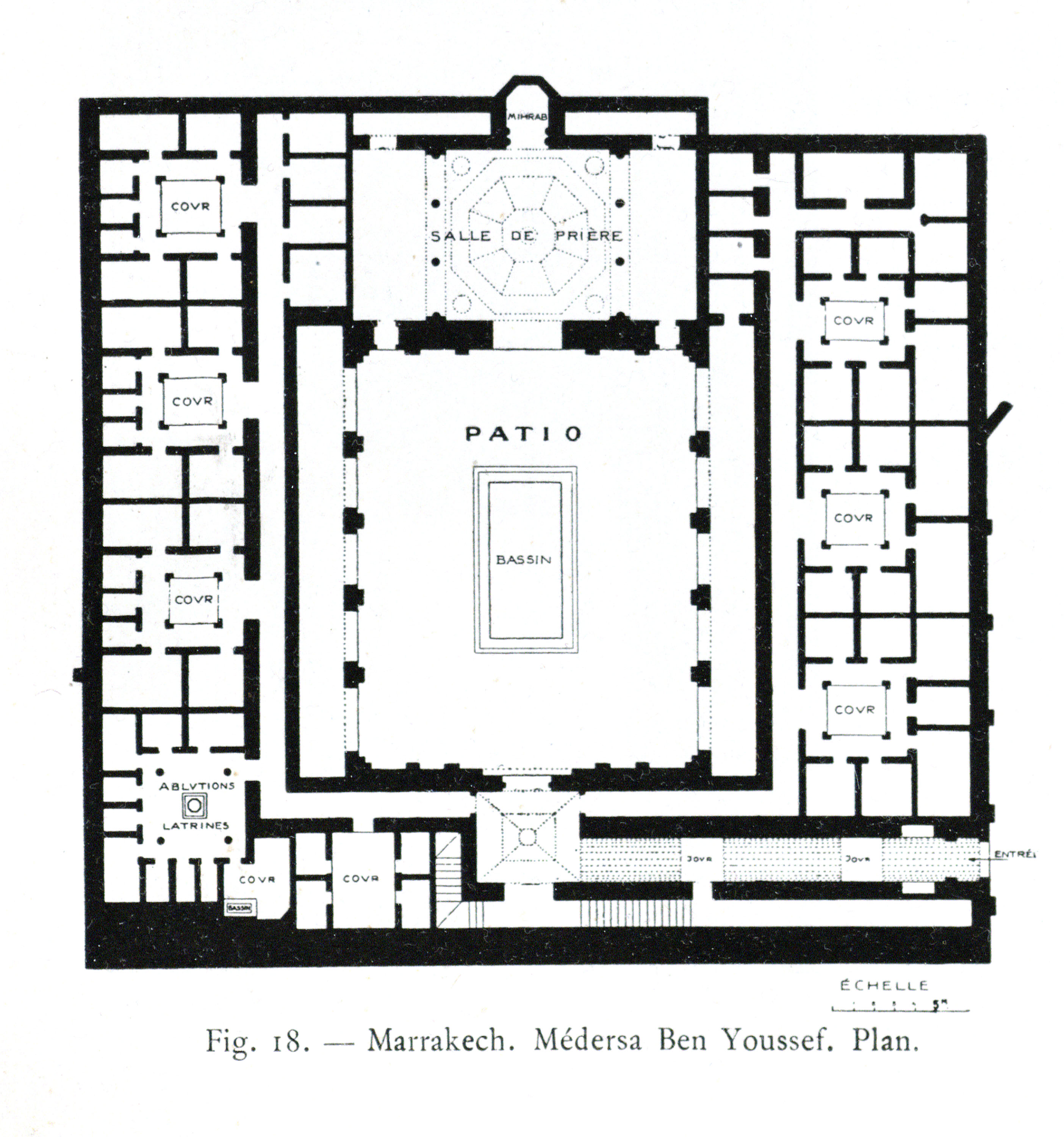 The medersa Ben Youssef is served by only one entrance. Under a covered porch, you discover the bronze entrance door, decorated with an inscription in honour of the founder of the medersa : Sultan Saadien Abdallah El Ghalib. Through a long corridor flanked by skylights and beautiful cedar ceilings, you access a room overlooking a staircase, patio and hallways leading to student rooms. 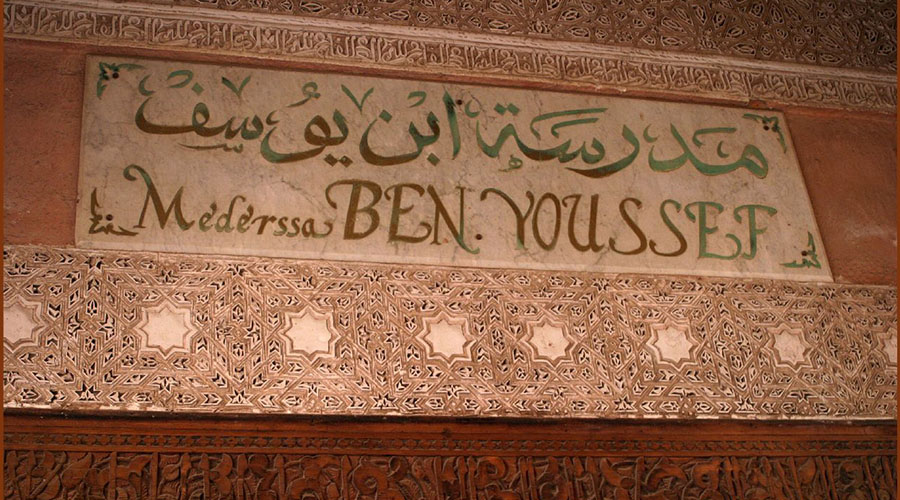 b/ The Central Court

Paved in white marble tiles, it contains in its centre a large basin of shallow depth, used for ablutions. The 4 facades of the courtyard are very finely worked. The central basin is used both for ablutions and for the aesthetics of the place. 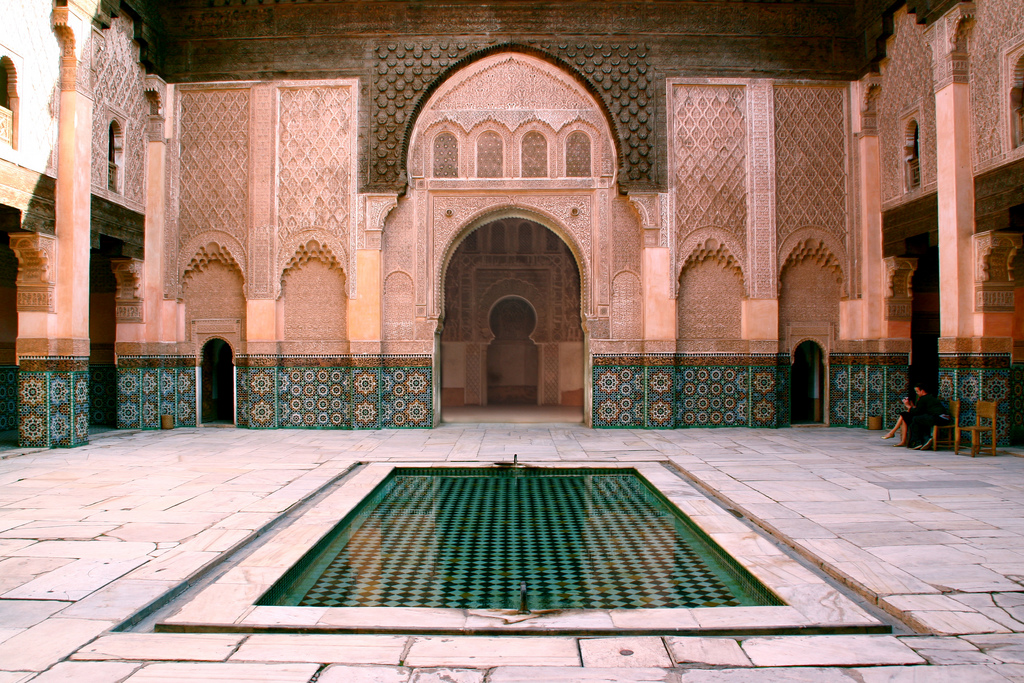 The lintel of the prayer hall displays a request for praise to the founder of the medersa Ben Youssef, Abdellah. The prayer room has 3 naves. To the right and left, on either side, two pillars in carrara marble surmounted by chiseled plaster arches delimit two spaces reserved for prayer. Opposite is an arched room containing the mihrab, where the imam, the prayer guide stands. Access to the mirhab is through a broken arch made of carved plaster. The central dome is built of cedar wood carved with floral motifs. The ceiling is made up of octagons (8 sides). The number 8 is very present in the motif, it is generally assimilated to funeral monuments.
plan medersa ben youssef marrakech – prayer room 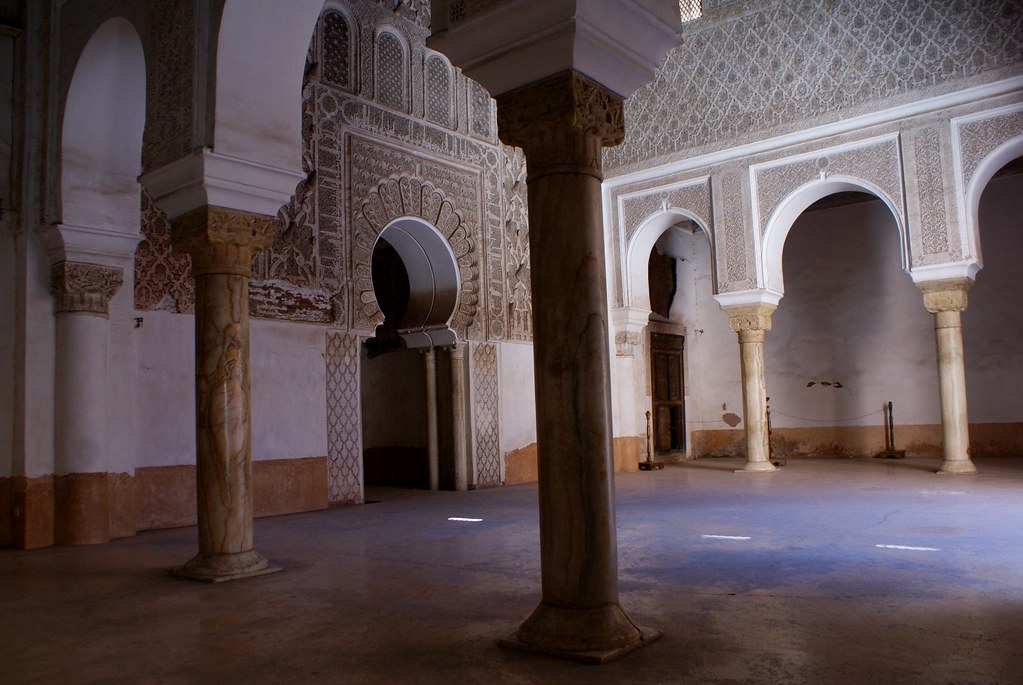 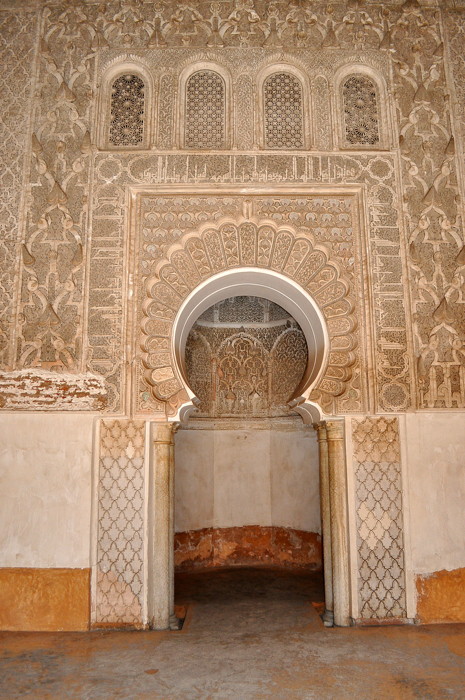 132 student rooms are spread over 2 sides of the building, around the central courtyard. The Rooms are distributed, on 2 levels, around the 6 small patios. They are all identical, measuring 9m2. These small cells are of a destitution and monastic sobriety.
2 bedrooms reconstruct the layout of the time, with rooms for students of rural origin and students of urban origin. 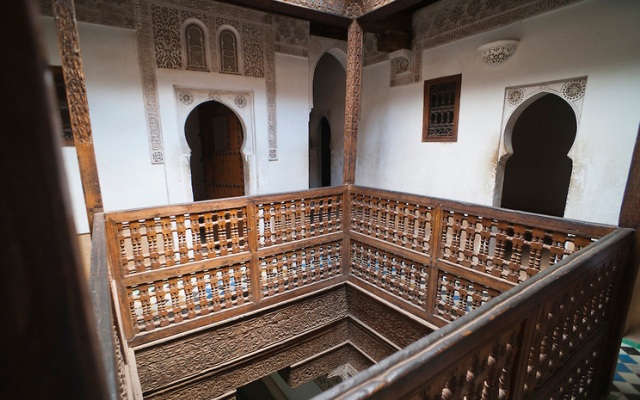 e/ The Hall of Ablutions

On the ground floor, the first room on the right, heading towards the courtyard, is for ablutions. Flanked by 4 marble columns and a small pool, it was here that the students prepared for prayer. Ablutions allow ritual purification in Islam.

Visit Le Spa of Riad Al Ksar in the Médina : Hammam & Massage for Couples, 2 steps from the Souks and Museums

The decoration of the medersa is extremely harmonious and is the result of a refined blend of cedar wood, marble, zelliges and plaster. The richness craftsmanship of the monument’s is enhanced by the details of the wood and plaster sculptures. In the patio, on the bottom of the facades, zeliges with geometric patterns based on 4 colours: blue, black, beige and brown. 2 calligraphic bands enhance the whole. The façades are then finely carved in plaster with diamond-shaped motifs. Foxes, crows and a return in carved cedar woodwork are inserted under the glazed green tiles.
The central basin gives the patio a feeling of fullness and an aesthetic addition by multiplying the building’s perspectives. 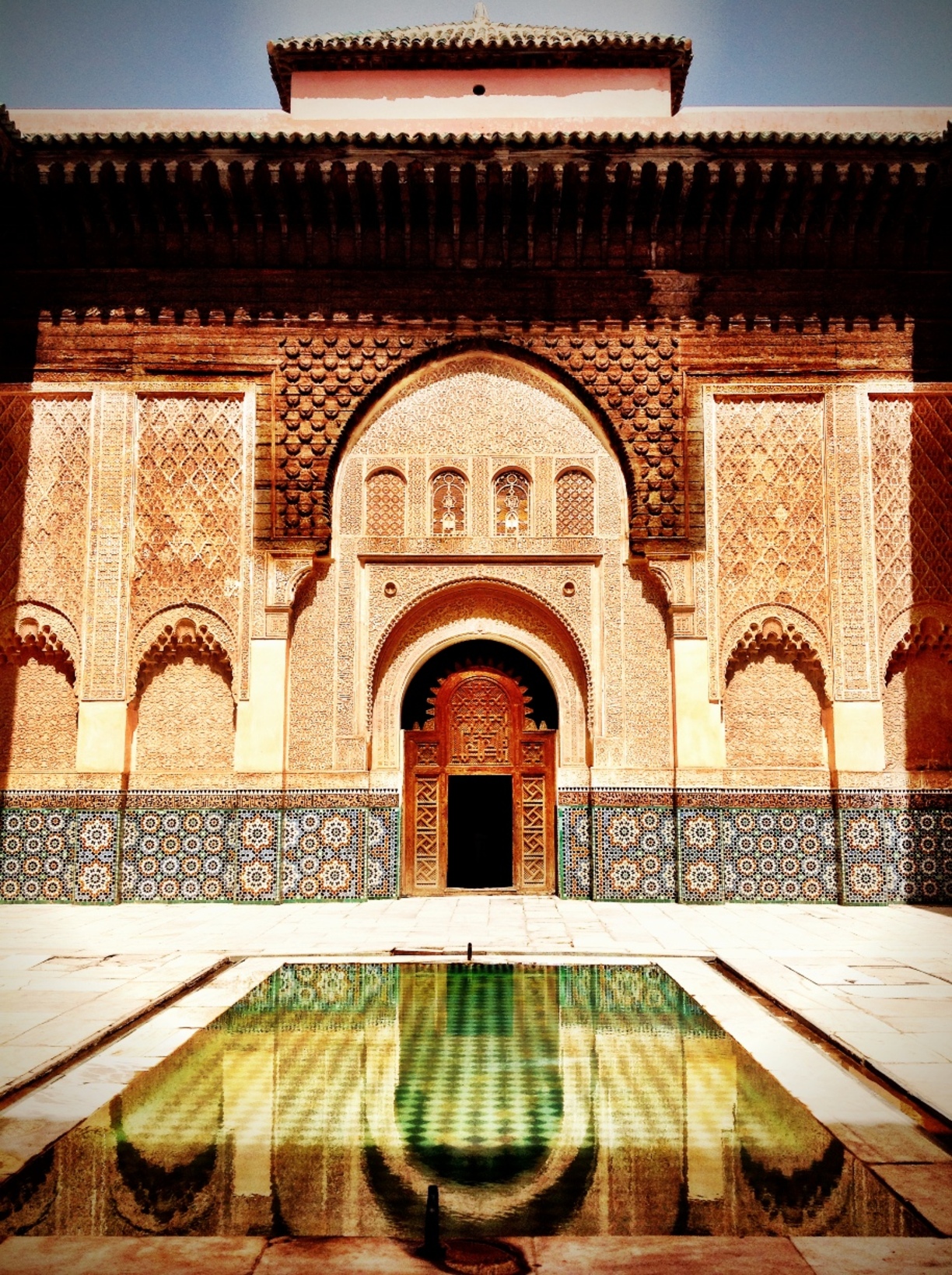 The following Articles may interest you:

Back to Marrakech Blog Homepage