… Bab Agnaou is a monumental Gate forming part of the Ramparts of Marrakech in the Kasbah district, in Medina. This heritage bears witness to the grandiose past of the Almohade Berber dynasty which had installed, in the 12th century, the heart of its power in Marrakech. Its Islamic Caliphate extended from Cordoba in Andalusia to Tripoli. 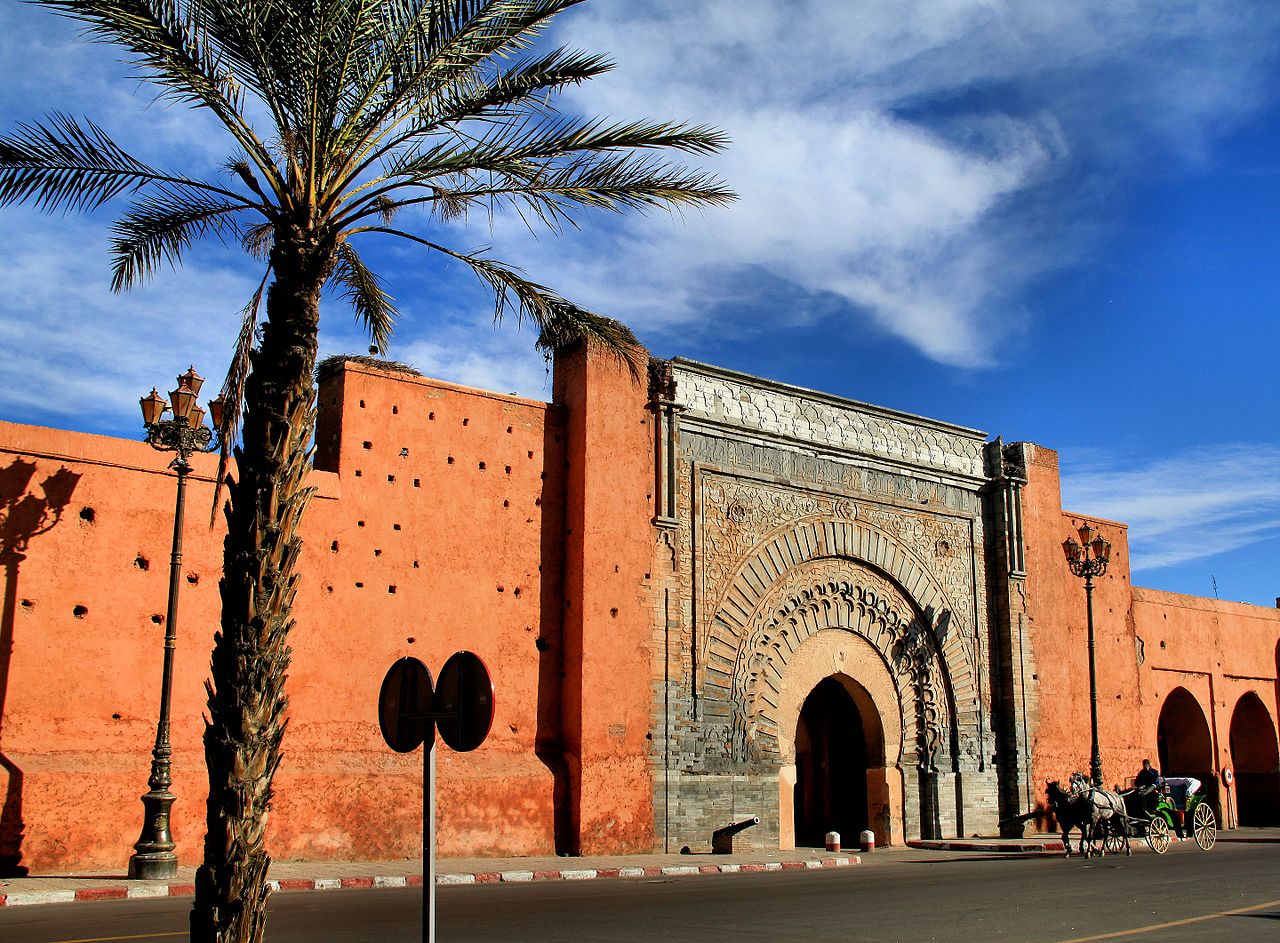 1/ The Bab Agnaou Gate in Marrakech

• Bab Agnaou, Gateway of the High Era of Marrakech

Bab Agnaou is one of the 19 gates that allows you to penetrate inside the ramparts of the city of Marrakech. This gate (“bab” in Arabic) dates from the Almohad Berber period, in the 12th century. It served as an entrance to the administrative and military complex of the Caliphal Kasbah, citadel of power, from the south of the city. Flanked by 2 cannons, it is one of the most impressive gates of Marrakech.

With a sumptuous stone decoration, its monumental urban architecture consists of 4 successive semi-circular arches, which seem to be superimposed on each other. This colossal architecture gives Bab Agnaou a role that is not only military, but also symbolic of power. Built in blue-grey sandstone from Gueliz, it is sculpted with geometric and floral motifs. A frieze, in kufic (angular) calligraphy, frames the set of verses from the Qur’an. 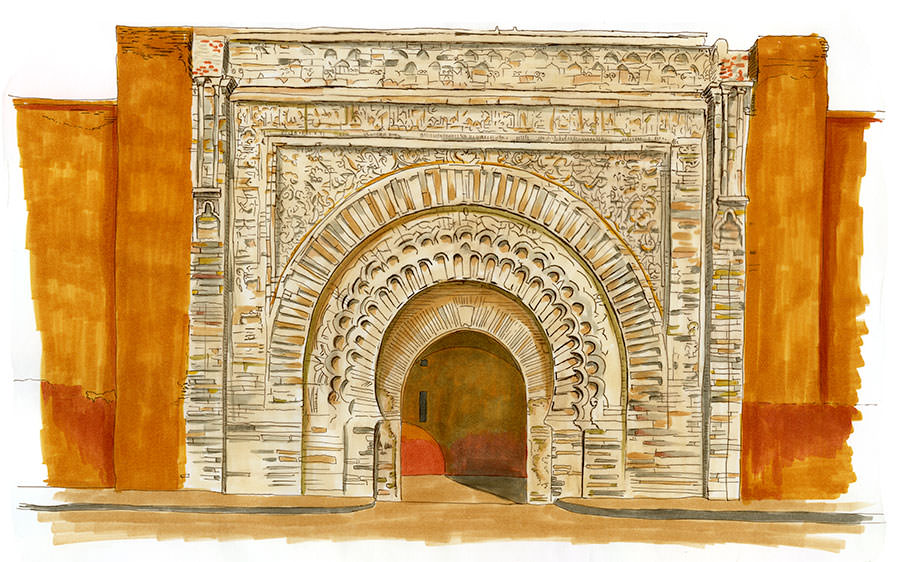 The name “Bab Agnaou” has two etymologies. On the one hand, it comes from the name “gnaoua”, in reference to the dark-skinned Berber Gnaoua people of the Sahara desert who came from the South to enter the Marrakech enclosure. Another version would be that Bab Agnaou was originally flanked by two towers, which have now disappeared. It would then have been called the “gate of the ram without horn“.

In the Almohad period, the gate would also have been called ‘bab el khol’ or gate of the blacks, and ‘bab al Qsar‘, literally the gate of the palace, in reference to the palatial complex of the Caliphate Kasbah. 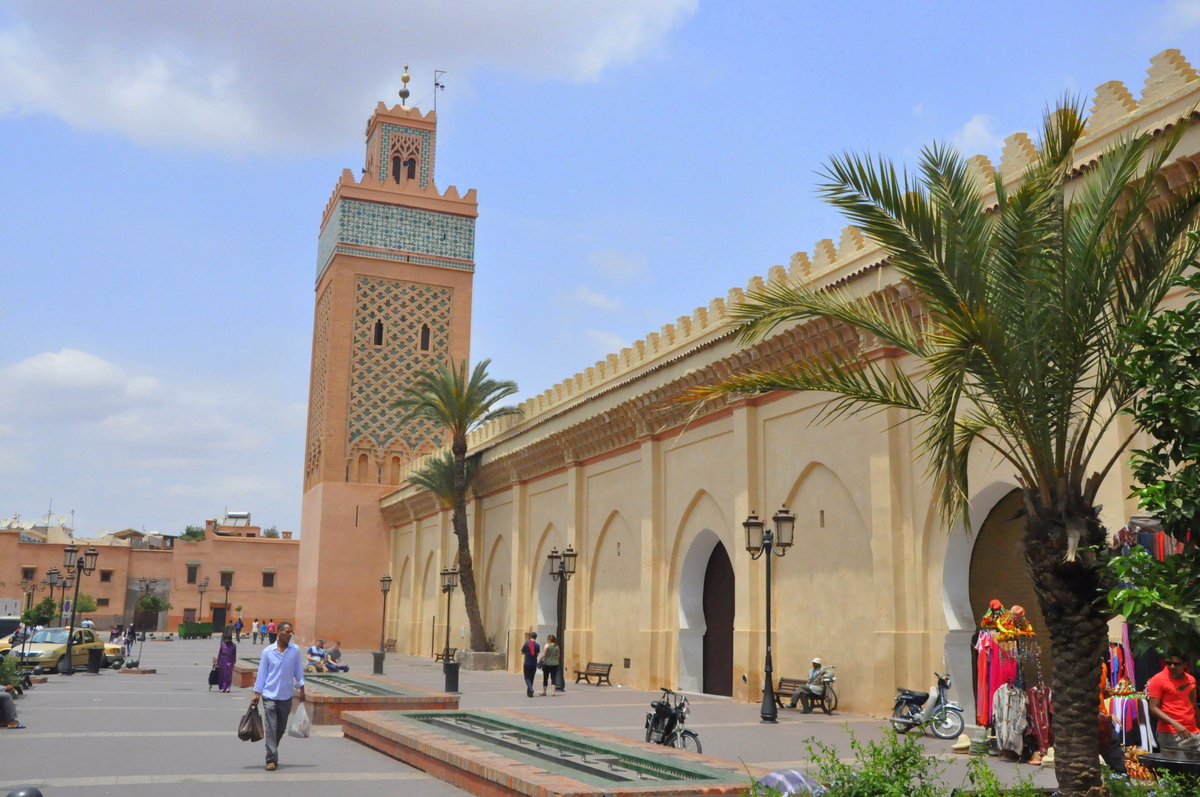 • The Fortification of Marrakech, starting in 1122

The Fortified Walls of Marrakech, pierced by 19 gates, extend over 19km and are flanked by 200 watchtowers. With a height of 8 to 9 meters, they measure up to 2m thick. They are built in a mixture of clay, lime and limestone called “tabia”, reddish in colour, coming from the hill of Gueliz, where the new city of Marrakech now extends.

The defensive complex dates from the very foundation of the medina of Marrakech. Ramparts and Gates were built from 1122, during the Almoravid dynasty, by Ali Ben Youssef. The latter was the son of Youssef Ibn Tachfin, 1st Almoravid caliph, founder of the city of Marrakech in 1071.

The function of the fortified enclosure was to protect itself from the Threat of the Almohad tribes, originating from the High Atlas. Under the Almoravid Empire, Bab Agnaou did not yet exist since the Kasbah district, at the very south of the medina, dates from the later period of the Almohads. At that time, the Ramparts of Marrakech were more restricted. 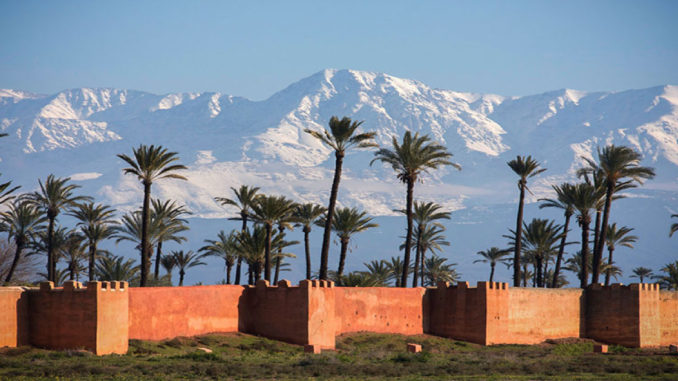 The 19 gates, called “bab” in Arabic, sometimes bear the names of the different tribes that came to trade or protect themselves within the ramparts. But not only that.

Bab Aghmat is a gate from the Almoravid era, located at the extreme south-east of the medina of Marrakech, overlooking the road to Ouarzazate. It takes its name from the city of Aghmat, 32km from Marrakech, near Ourika, in Berber country. This is where the Almoravids lived before the end of the construction of Marrakech. It is through this door that the Almohads invaded Marrakech in 1147. Aghmat is the oldest city in Morocco, dating from before the arrival of Islam, and remains a major archaeological site. 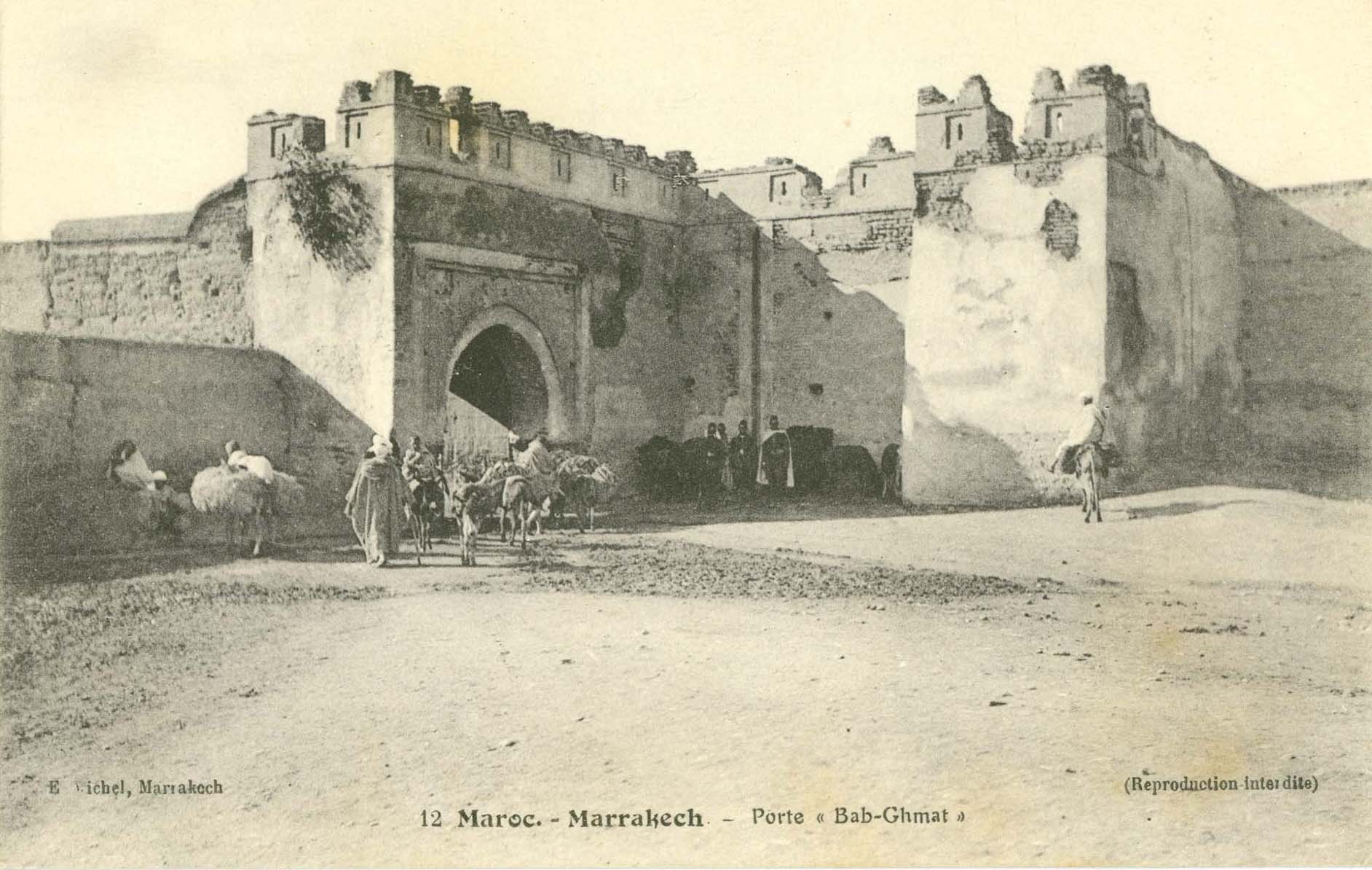 Discover Saadian tombs | Jewel of the Golden Age of Marrakech

Bab Ksiba is a gate built in the Almohad period. It gives access, by its south-western end, to the caliphal complex of the Kasbah, the 1st citadel in Morocco. Ksiba means small fort in Berber. It is also called Bab El Makhzen, which can be translated as the door of the Sultanate. 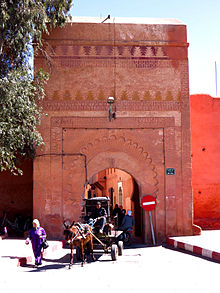 Bab Er Robb (Ar-Rubb) is a gate from the Almohad period as well, located a few meters from Bab Agnaou, along the Kasbah district. It opens towards the south, on the road to Ourika and in the direction of the Atlas Mountains. It served as the only checkpoint for Alcoholic Beverages. Robb is an alcoholic drink made from figs and raspberries, a kind of cooked wine. This door is also the witness of a bloody episode. In 1310, during the reign of Sultan Abu Thabit, the heads of 600 decapitated Merinid opponents were exposed, for example. 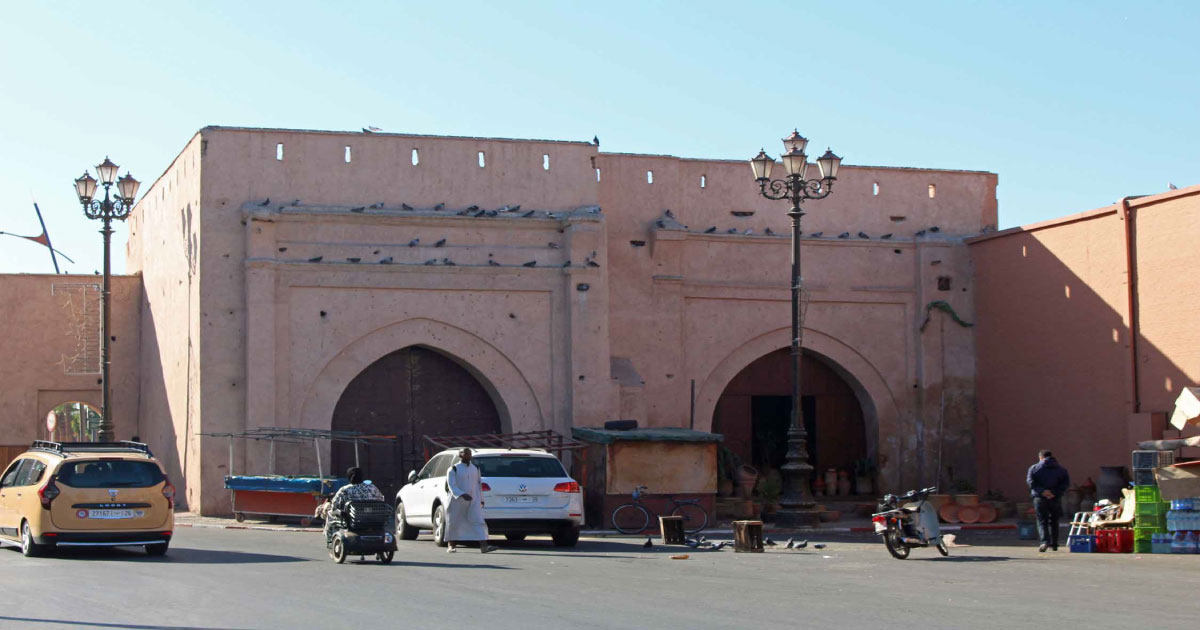 3/ Bab Agnaou, based on the Remains of the Almoravid Empire

• Before Bab Agnaou… The Almoravid City

Originally from the Western Sahara (now Mauritania), the Almoravid Berbers banded together and benefited from the trade passing through their territory from sub-Saharan Africa to the Western Maghreb. In 1054-1055, they became masters of the caravan gold market between Ghana and the Maghreb.

The city of Marrakech was founded in 1071, the year 463 of the Hegira, by the Almoravid Berber chief Youssef Ben Tachfin, 3rd emir and 1st sultan of the dynasty, whose mausoleum (so badly developed) is moreover visible near the Koutoubia Mosque. 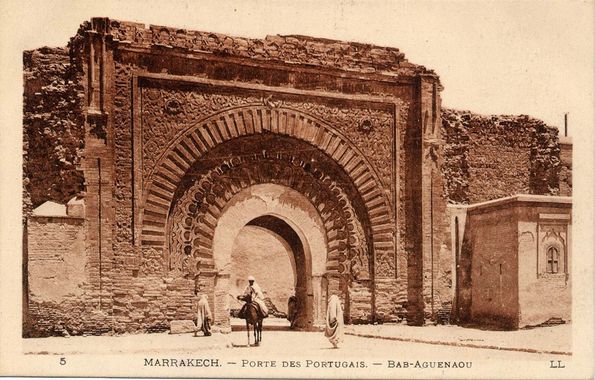 With an army of 24,000 men, the Almoravids conquered Morocco and Muslim Spain, Al Andalus, in 1086. Their powerful empire extended from Andalusia in the north to western Algeria in the east and from there to Senegal in the south. Marrakesh is developing culturally and religiously.

At the end of the 11th century, the Khettaras, pipelines allowing the extraction of water from the water table, make it possible to irrigate Marrakech naturally from the slopes of the Atlas mountains.

Succeeding his father Youssef Ben Tachfin in 1106, Ali ben Youssef erected many mosques, such as the one formerly built in the place of the current Koutoubia, in 1120, or the one adjacent to the Medersa Ben Youssef, completed between 1121 and 1132.

• The Almoravid Fortification of Marrakech: The Gates & Ramparts

He had Marrakech fortified in 1122-1123 by building the 1st Ramparts, in fear of the successive attacks of the Almohad rebels. If a large number of gates provide access to the Medina of Marrakech, Bab Agnaou does not yet exist. It is part of the fortified enclosure of the Caliph’s Kasbah, south of the Medina, which will be built under the Almohads. 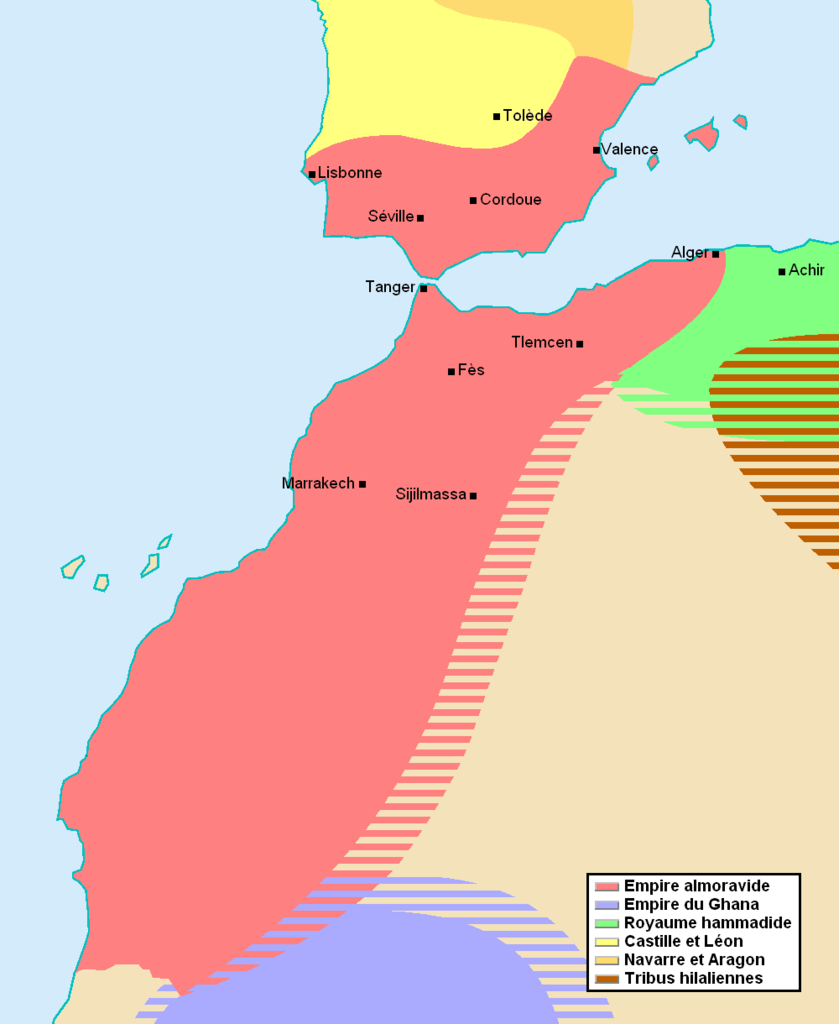 4/ Bab Agnaou, an Architecture the Size of the Almohad Caliphate

• The Construction of the Bab Agnaou Gate by the Almohads

At the same time, around 1120, the Almohad movement was founded in Tin Mel, in the High Atlas (150km south-west of Marrakech). A religious and military community, it preached a return to an austere and rigid Islam. Abd Al Mumin, 1st Caliph, raises an army to wage holy war. He extends the Almohad power by conquering all North Africa and Andalusia.

In 1145, Al Andalus falls under Almohad domination and Sevilla becomes a second capital of the Caliphate. Fez fell in 1146. In 1147, the Almohades take possession of Marrakech, which becomes their capital, by entering through Bab Ghmat, in the south-east of the city. They exterminate and then hunt the last Almoravids, and destroy many monuments. They nevertheless kept the ramparts of Marrakech, which they extended around the new Caliphal Complex of the Kasbah, and pierced new gates, such as Bab Agnaou. 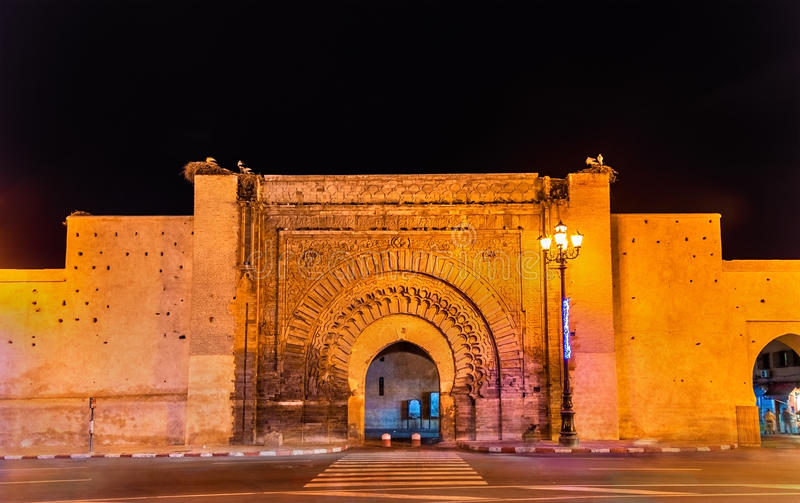 • The Almohad Heritage of the Time of Bab Agnaou

The son of Abd Al Mumin, Abu Yacoub Yussef, 1163-1184, and his grandson, Abu Yusef Yaqub Al Mansour (the Victorious), 3rd Caliph, 1184-1199, perpetuate the Almohad dynasty. They built imposing monuments: The Koutoubia of Marrakech, completed in 1196, the Giralda of Sevilla, in 1198 or the Hassan Tower of Rabat (unfinished because of an earthquake).

The Gardens of the Menara as well as the Gardens of the Agdal, created in 1156, date from the Almohad period. Planted respectively to the south and south-west of the city, they served as water reservoirs to irrigate the surrounding olive groves. The gates of bab Ksiba and bab Agnaou open towards these gardens. 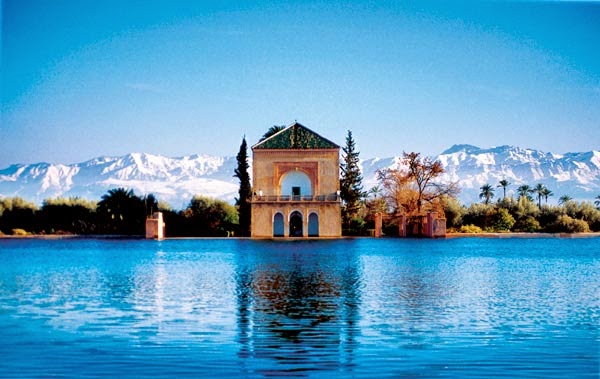 The Kasbah district was chosen to house the Caliphate residence of Abd Al Mumin, 1st Caliph of the Almohad dynasty. The palatial complex integrates the administrative and military functions of the Caliphate.

Bab Agnaou does not directly overlook the alley that opens towards the Kasbah Mosque. Once past the monumental gate, a second wall faces Bab Agnaou. It is by an offset entrance, in the form of a chicane, allowing the integration of a checkpoint and reinforcement that one reaches the heart of the Kasbah district. The monumental structure of bab Agnaou is very interesting. It is explained by the historical context. 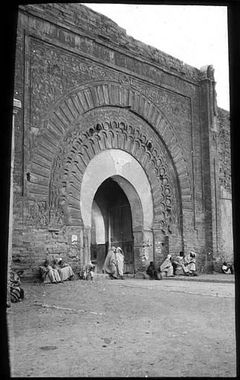 Following Abd Al Mumin, his son Abu Yacoub Yussef and grandson Abu Yusef Yaqub Al Mansour will continue his work.  The borders of Morocco extended, at the time, from Tripoli to Cordoba.

Marrakesh then imposed itself as the major city of the medieval Muslim West. The Almohad Court attracted many artists, intellectuals and writers, and reached its apogee under the Caliphate of Abu Yusef Yaqub Al Mansour. Numerous exchanges between the East, Europe and the Maghreb developed, including various embassies. It is then called Kasbah Mansourienne. 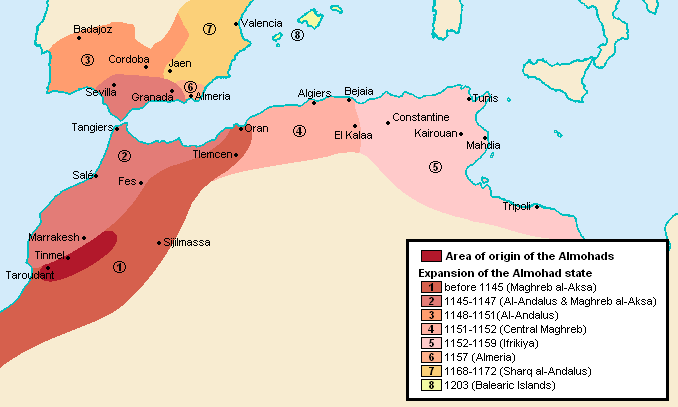 Discover What to see in Marrakech ? During a 3 Days / Nights Break & More

The whole Kasbah of “El Mansouria” included a hospital, in which the famous Andalusian doctor Ibn Tufayl practiced, whose name is today that of a large hospital in Marrakech. Averroes, whose Arabic name is Ibn Rochd of Cordoba is a great philosopher, jurist, and adviser to the 3rd Caliph. The mosques of Moulay Al Yazid (of the Kasbah) and Mouassine, in Marrakech, date from the reign of Abu Yusef Yqub Al Mansour. 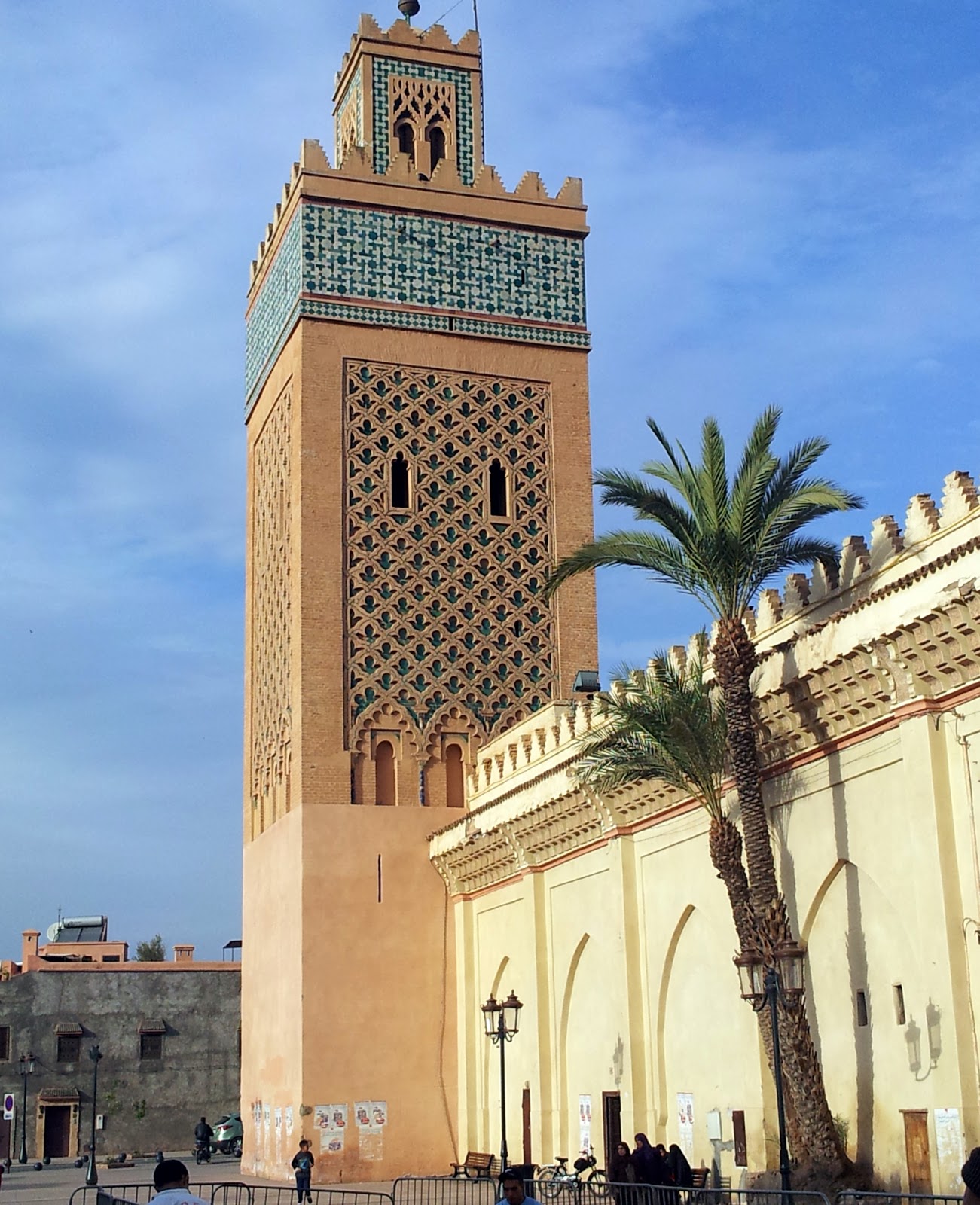 Bab Agnaou contains all the secrets of the Almohad Caliphate, but the remains of the Gates and Ramparts of Marrakech perpetuate, nearly 1000 years later, the priceless legacy left by the powerful Almohad Berber Dynasty. 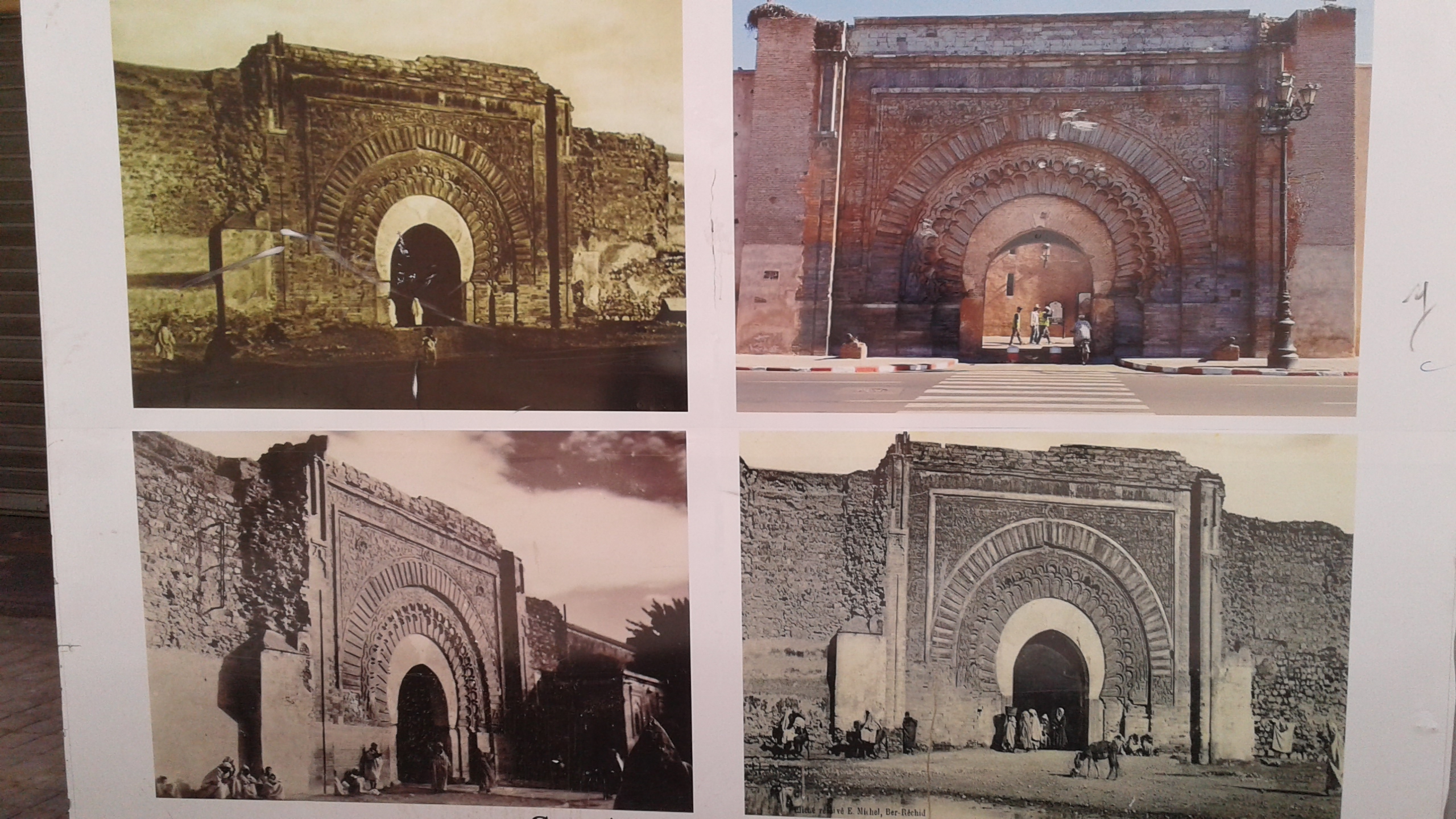 Monument accessible without entrance. Free of charge. Renovation Works in 2020/2021

!! WARNING: RENOVATION WORK of BAB AGNAOU IN 2020 !!! The Door has many scaffoldings in Facade

The following Articles may interest you :