… The El Badi Palace is the witness of the Golden Age of Marrakech, then a caravan crossroads and Capital City of the powerful kingdom of Morocco. After his return from exile, Sultan Ahmed El Mansour had built this monument of more than 300 pieces to celebrate the victory of the powerful Saadian army over the Portuguese occupier. Considered as a Paradise on earth by several testimonies, El Badi Palace is a jewel of Islamic art. It was to represent the symbol of the power of a huge sultanate that extended from the Mediterranean to Niger. Now largely disappeared, it is nevertheless being reborn in virtual reality thanks to the work of Antonio Almagro, a researcher at the EEA in Granada, Spain. 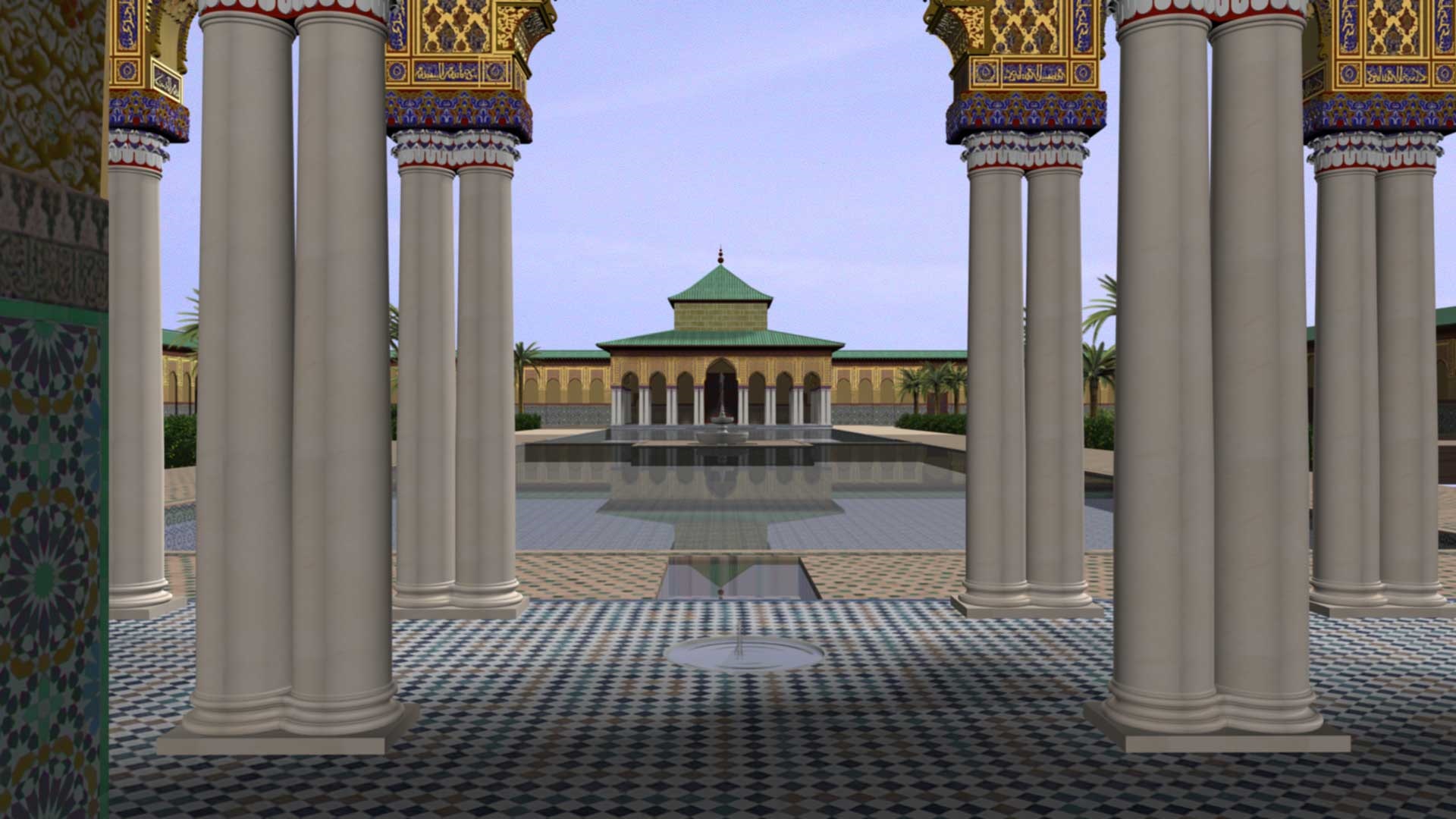 It was following the victory of the Saadians over the Portuguese, during the battle of the 3 kings, that Sultan Ahmed El Mansour had built El Badi Palace, a translation of “the palace of the incomparable“.  In 1578 (986 CE – AH anno hegirae) the works began until 1594. Some building works even lasted until 1603, the year in which the Sultan died. The decoration of El Badi Palace is influenced by Alhambra in Grenada. 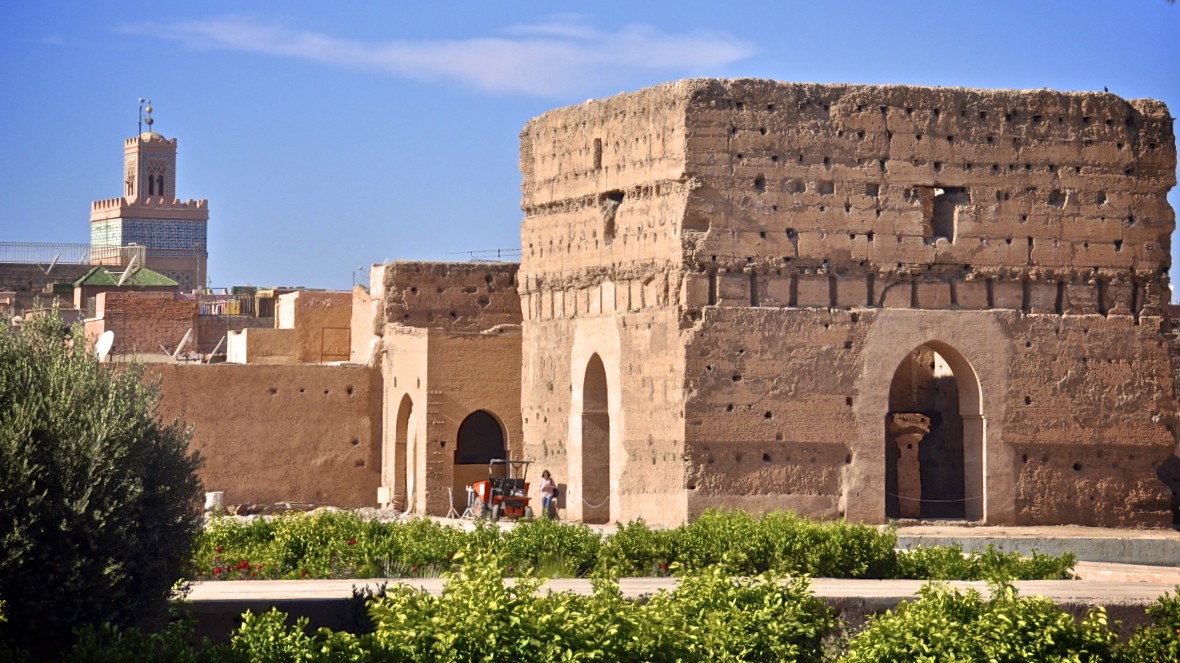 Discover the Saadians Tombs in Marrakech

1/ The Splendor and Richness of the Saadian Palace El Badi

The name El Badi means “the incomparable”, one of the 99 names given to God. The palace complex El Badi, or Ksar Badii in Arabic, is located in the northeast of the Kasbah of the Almohad, in the Mellah district of Marrakech, near the Sultan’s private palace. The function of El Badi Palace is above all political: to show the Sultan’s power with a sumptuous decoration and an unequalled size has even to impress the Elite of the kingdom as much as the foreign embassies visiting Morocco during the hearings.

Inspired by the Alhambra Palace in Granada, Spain, the most beautiful materials are used to build the Palace: cedar wood from the Atlas, Carrara marble from Italy, ceramics from Spain, gold from Sudan, jade from China, onyx from France, ivory from black Africa… The best craftsmen from Morocco work on the Palace site. Foreign architects and craftsmen are also involved in the project. It is reported that the Sultan was generous with the manpower employed.

The main door of the palace complex is called bab al rokham, a marble door, and opens in the southwest corner of the palace, on the Kasbah side.

A system of corridors and underground rooms allowed the servants to circulate without being seen. The basements also included hammams, kitchen and a prison.

A central heating system was installed in the floor of the pavilions. 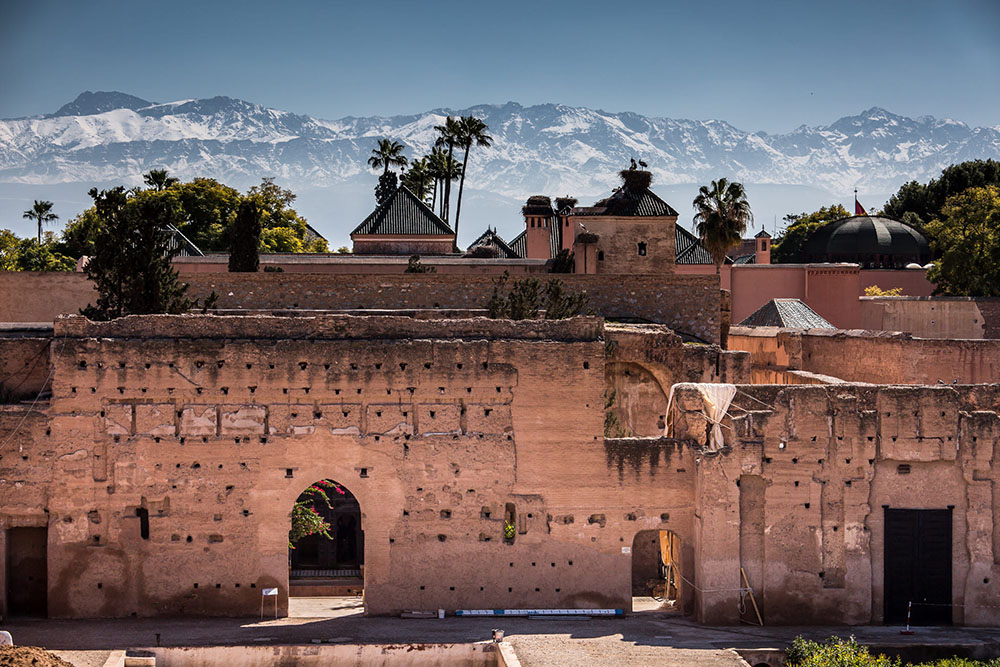 Discover the Best Places to See in the Medina of Marrakech ?

In its center is a monumental fountain. Four flowerbeds below are planted by fruit tree. In the 4 corners of the palace , they are 4 pools of 30m x 10m.

On each side of the 2 crystal pavilions and audiences, on the perimeter of the courtyard of the palace el badi are built two large pavilions. The green pavilion and the heliotrope. Bordered by a long open gallery with a large surface area, these pavilions included the spaces intended for the residence of visitors and ambassadors. 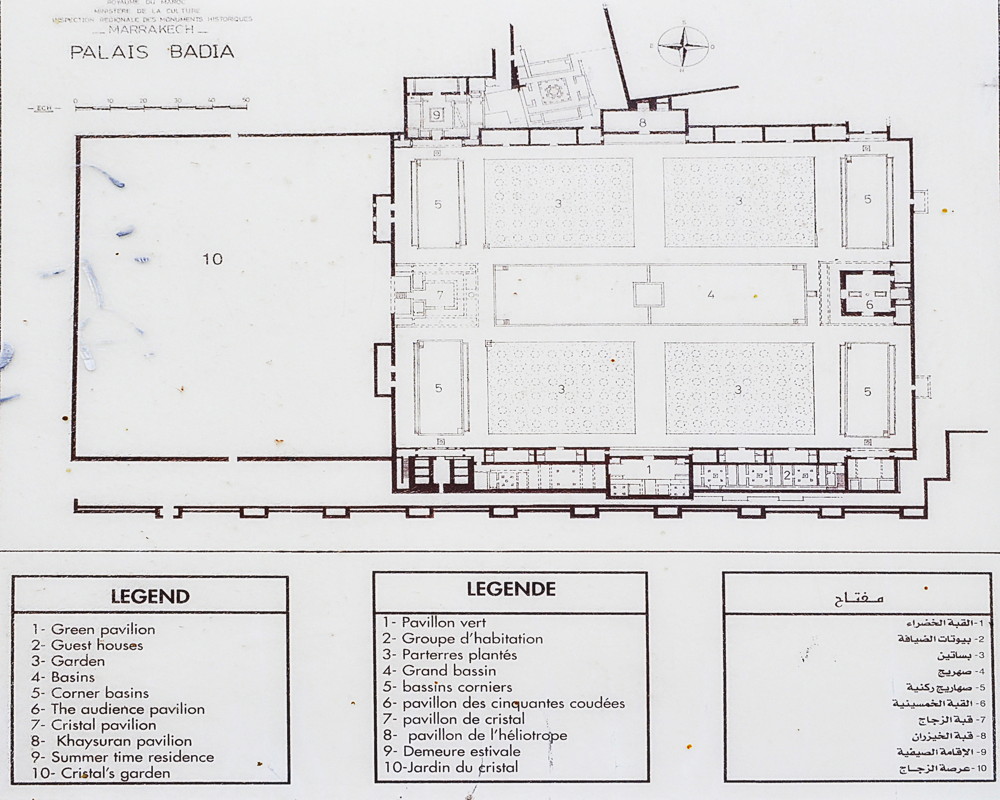 Overhanging a richly decorated wooden dome and flanked by small cooling basins on the ground, these two pavilions were frequented by the Sultan. The audiences pavilion to receive embassies and visitors, the crystal pavilion for private use. Both are almost identical in style with zellige floors and flanked by 2 rows of marble columns.

Called a summer residence, this residence was used as private accommodation by the Sultan. Much smaller in size than the sumptuous palaces of el badi, the summer residence adjoined the palace on its southern façade, along the current royal palace. 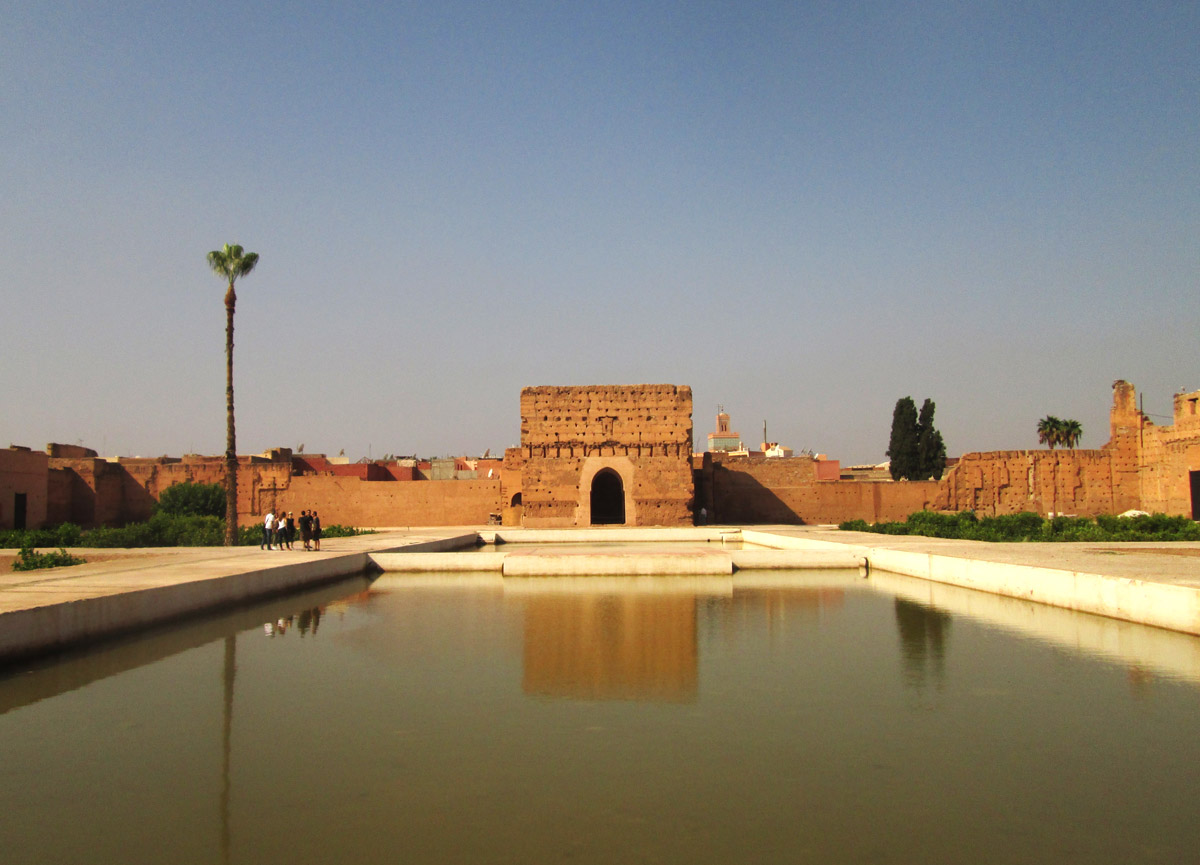 Discover the History of Jemaa El Fnaa Square in Marrakech

The minbar, the imam’s preaching chair, from the great mosque of the Koutoubia of Marrakech is visible inside one of the rooms of the palace el badii. Made in Cordoba, Spain in the 12th century, 900 years ago. It is composed of a thousand pieces carved in cedar wood with silver inlays and decorated with ebony and sandalwood inlays. The minbar has been renovated due to a very strong degradation of the wood by wood-boring insects, in order to present it in its original aspect. 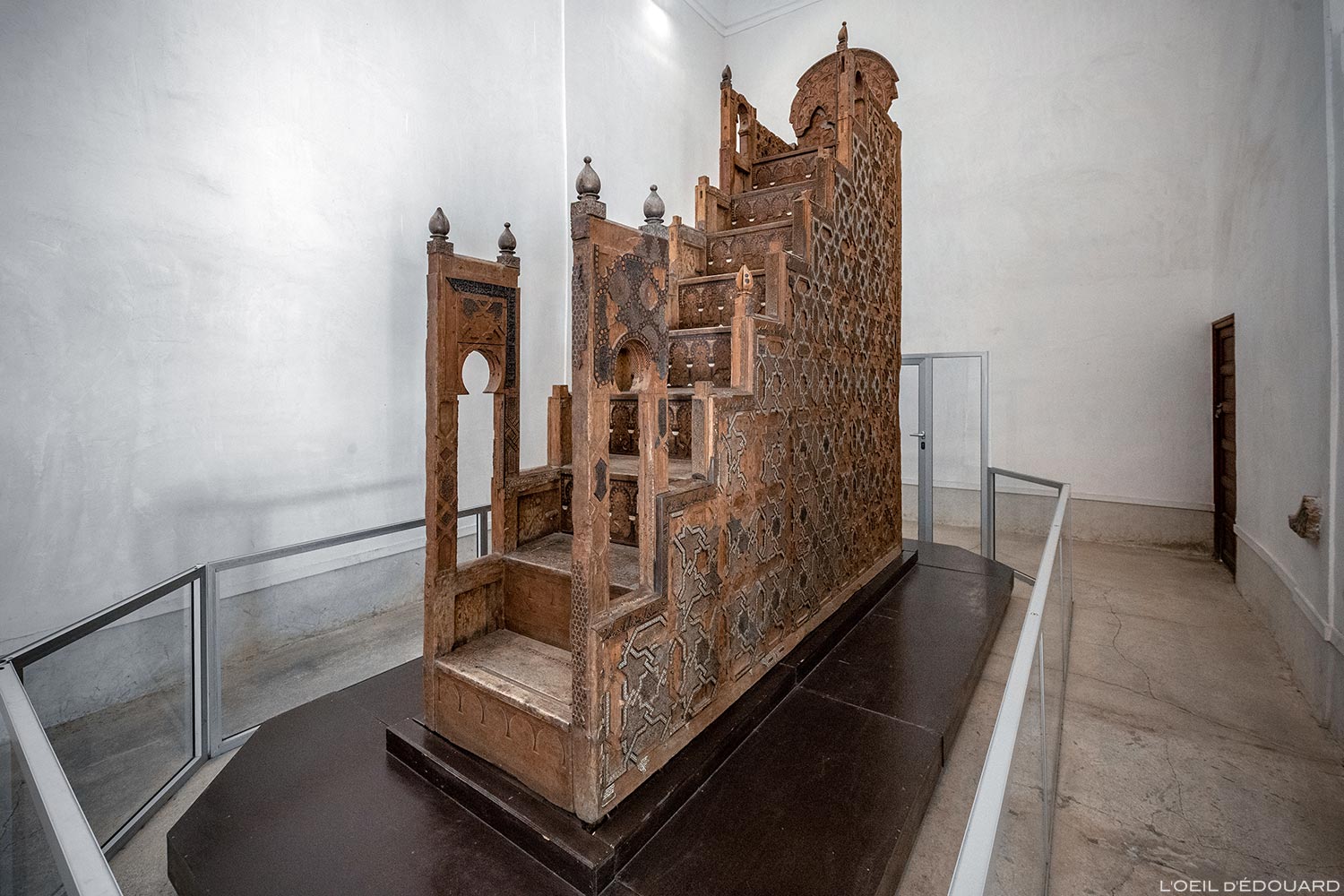 Ahmed El Mansour El Dahabi is, in his time, one of the most powerful monarchs in the Mediterranean region. Morocco extends under his reign from the Mediterranean to Niger. Trans-Saharan Trade, especially gold, between sub-Saharan Africa and Europe enriched the kingdom. As a modern sultan, Ahmed El Mansour is surrounded by a court of scholars, artists and poets and displays an impressive splendor to foreign visitors and ambassadors. 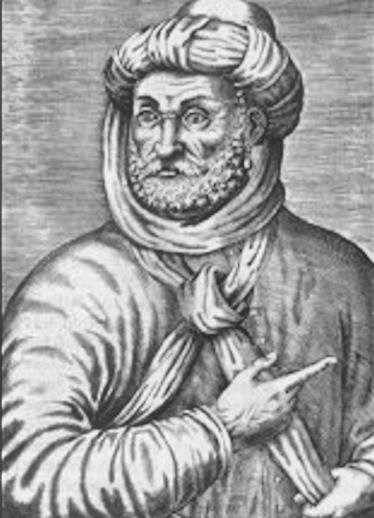 Discover the History of  Majorelle Garden in Marrakech


The Saadian dynasty has emerged in Morocco in an internal context of Portuguese occupation, mainly port occupation, since 1415, and the rise of Islamic sentiment. The Wattassides, unable to stop Moroccan decadence, peace and unity, are overwhelmed by the Saadians, defenders of Islam. Coming from a Cherifian family in the Draa Valley, the Saadians led the resistance against the Portuguese and reunited the kingdom with a central power. They first took over Marrakech in 1524, then Fez to the Ottomans in 1554. The Wattassides were driven out of Morocco and Marrakech became the capital. Morocco is equipped with artillery and gun making workshops. The Saharan Caravan trade was then totally controlled by the Moroccans.

The 1st Saadian Sultan, Mohammed ech-Cheikh, was murdered in 1557 by Turkish soldiers of his guard because he refused to swear allegiance to the Sultan of the Ottoman Empire. To the east, the regency of Algiers, now Algeria, is indeed an autonomous region integrated into the Ottoman empire, and which seeks to extend its influence.

Moulay Abdallah al Ghalib Billah, his son, succeeded him until 1574. For 20 years, his 2 brothers, Abu Abbas Ahmed (future Sultan Ahmed Al Mansour) and Abd El Malek fled into exile in the Ottoman Empire, Constantinople and then Algiers, fearing to be murdered by the Sultan.

Abd El Malek joined his forces with the Turks, present in Algiers, to regain power in 1576. Mohammed al moutaouakil joined forces with the Portuguese to try to drive out his uncle Abd El Malek. The famous war of the 3 kings, battle of Alcacer Quibir or Battle of the wadi al-Makhazin on August 4, 1578, followed.

During the summer of 1578, the Portuguese and Mohammed al moutaouakil invaded northern Morocco. On August 4 they opposed Abd El Malek allied to the Ottomans. It was a defeat for the Portuguese army and the battle ended in the death of Abd El Malek, Mohammed al moutaouakil and Sebastian I, king of Portugal. It is under these conditions that Abu Abbas Ahmed, brother of the late ruler Abd-al-Malek, accedes to the throne and becomes the 5th Saadian Sultan Ahmed el Mansour “the victorious” after his 20-year exile in the Ottoman Empire and Algiers. 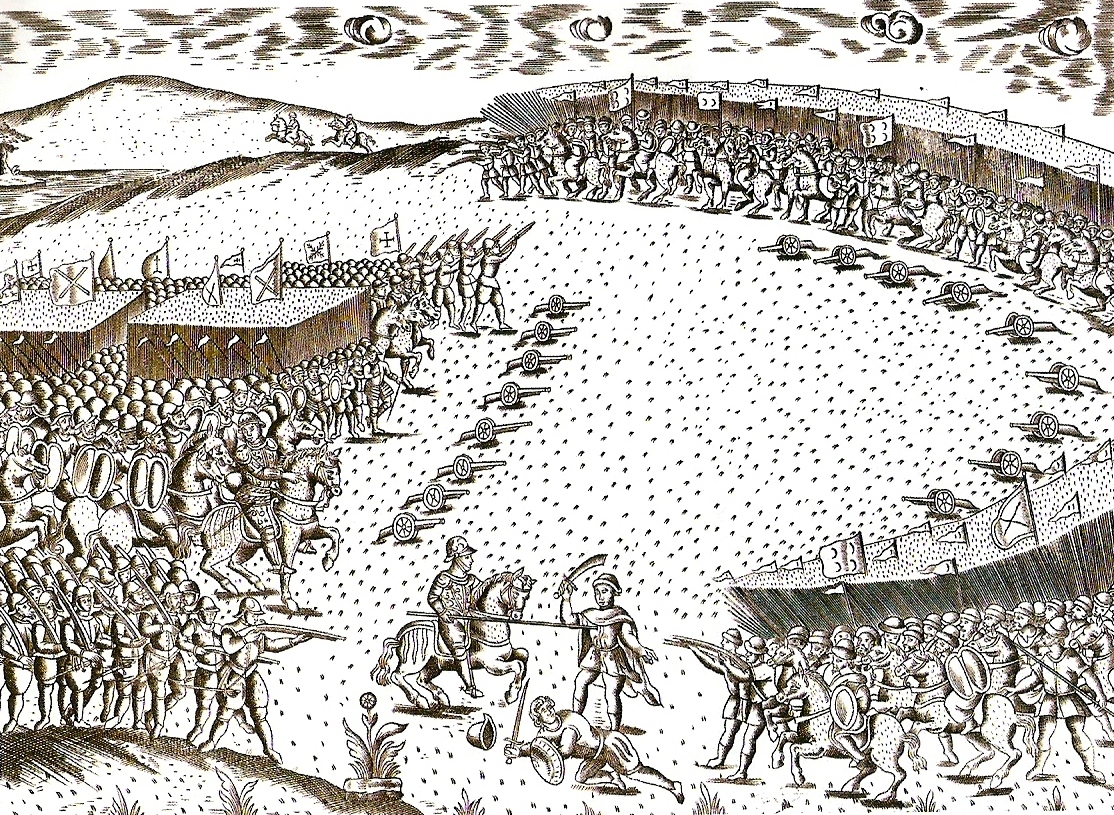 Discover the History of  Koutoubia Mosque in Marrakech

Portugal lost its independence by being annexed by the Kingdom of Spain and its nobles had to pay large ransoms for the purchase of its warriors taken prisoner by Morocco. Sultan Ahmed El Mansour (the victorious) thus took the nickname of El Dahabi (the golden one). Morocco enjoys immense prestige in Europe by becoming a great power on its borders.

The army was modernized along the lines of the Ottoman Empire, maintaining order and collecting taxes. In Fez, the sultan is represented by a viceroy. Many embassies visit Marrakech. Tensions between the Cherifian kingdom and the Ottoman empire ended. Morocco extends from Tangier to Niger, below the sub-Saharan region. The rich gold deposits of Western Nigerian Sudan, conquered in 1590, pass through Marrakech and provide Morocco with a considerable enrichment by being used for coinage. 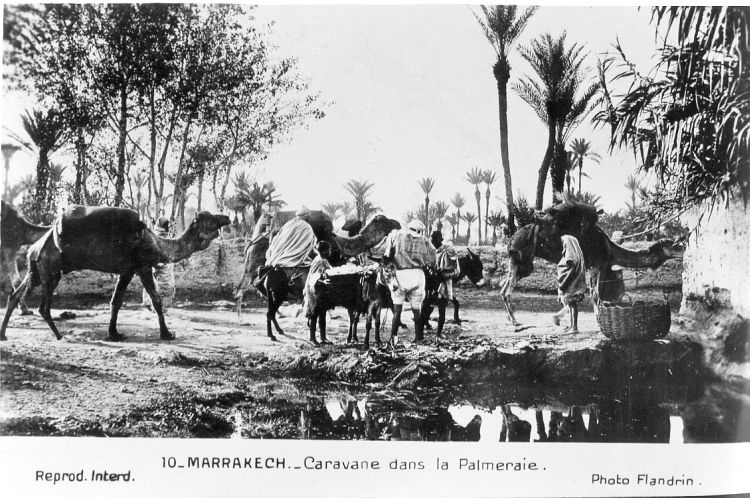 Finally, the sugar cane trade in the Souss Valley, from Marrakech to Chichaoua, provides resources. One kilo of sugar is then exchanged for the same weight of marble. In England, the Trade Company of Barbaria (Moroccan) imports many goods from Morocco.

Sultan Ahmed el Mansour reigns absolutely, maintaining the country and the unity of the kingdom. Foreign policy allows many sub-Saharan, Turkish and European influences to enter. In the cultural, artistic and architectural fields, many sumptuous and far-reaching projects are being undertaken. It is in this context that El Badi Palace, the center of power of an immense empire, displays a luxury and splendor unparalleled to the glory of Sultan El Mansour.


In 1603, Sultan El Mansour was swept away by the plague. His sons are proclaimed sultans, one in Fez, the other in Marrakech. The result was a territorial dismemberment leading to hatred, terror and civil wars for 60 years.

It will be necessary to wait for the Alawid Sultans to restore order and unity to the kingdom. Sultan Alawite Moulay Ismaïl, who reigns 55 years, decides to transfer the capital from Marrakech to Meknes in 1672. Marrakech will revolt 3 times against Moulay Ismail. It will suffer several sieges and will pay a heavy tribe. Moulay Ismail made a clean sweep of the symbolic monuments of the Saadian dynasty and looted the entire Palace el Badi to use the materials in its palaces in the imperial city of Meknes, which became capital in 1672. By superstition, he did not dare to destroy the graves of the Saadian tombs where Sultan Ahmed El Mansur El Dahahbi was buried. 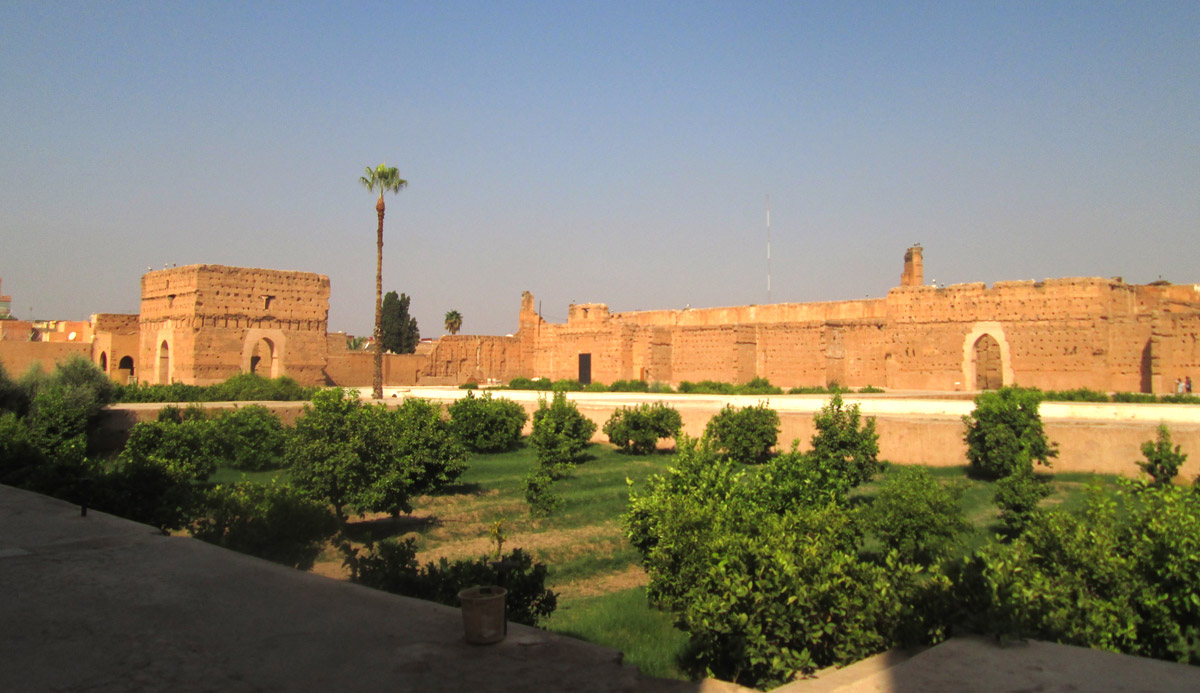 Read Article How to Get Around Marrakech ?

Even in its current state, the Palatial complex impresses the visitor. Both the memory of the power and splendor of the Saadian reign, the volumes of the site set the tone. Archaeological excavations undertaken during the French protectorate in 1953 established the configuration of the El Badi Palace. 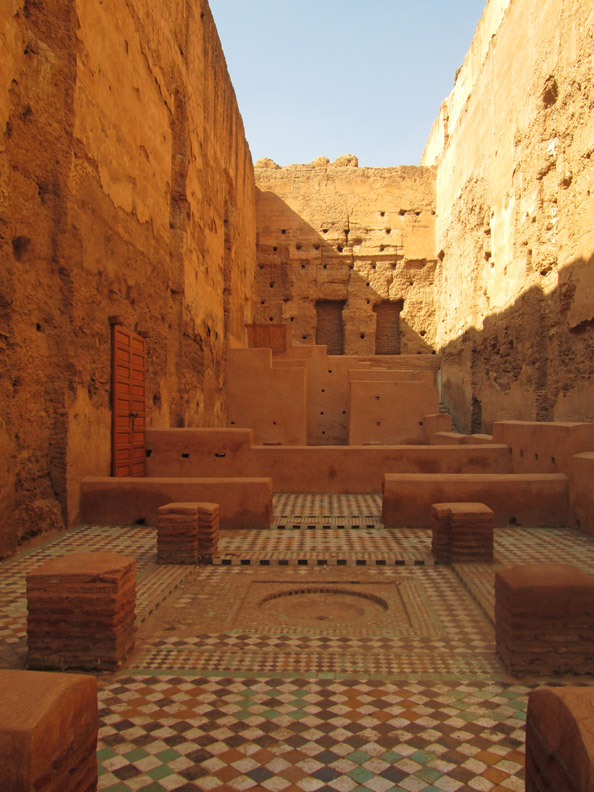 Since 2011, the badii palace has been used as a stage for the French-speaking festival Marrakech du rire de Jamel Debbouze. In 2019, the site was used as the setting for a fashion show by the famous Christian Dior fashion house in Paris for its 2020 cruise collection. Other private events also take place in the courtyard of the ruins of the Badii Palace. 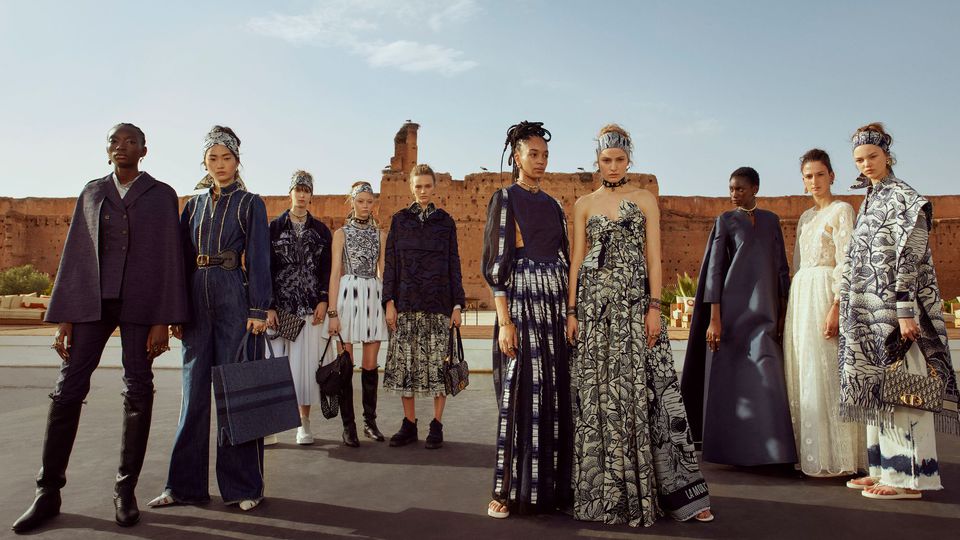 The School of Arabic Studies (EEA Escuela de Estudios Árabes) is a research institute belonging to the Spanish Higher Council for Scientific Research (CSIC Consejo Superior de Investigaciones Científicas) in Granada in Spain. It has carried out important archaeological research on the building of the el badi palace, in connection with their research on the Arab-Muslim palaces of Andalusia, the Alhambra of Granada in particular. Thanks to the new computer technologies, virtual 3D models of El Badi Palace, by M. © González and L. Berenguel with decoration hypotheses by ©Antonio Almagro, have been realized by the School of Arabic Studies. The results give impressive life to the jewel of the Saadian empire, the El Badi Palace in Marrakech. 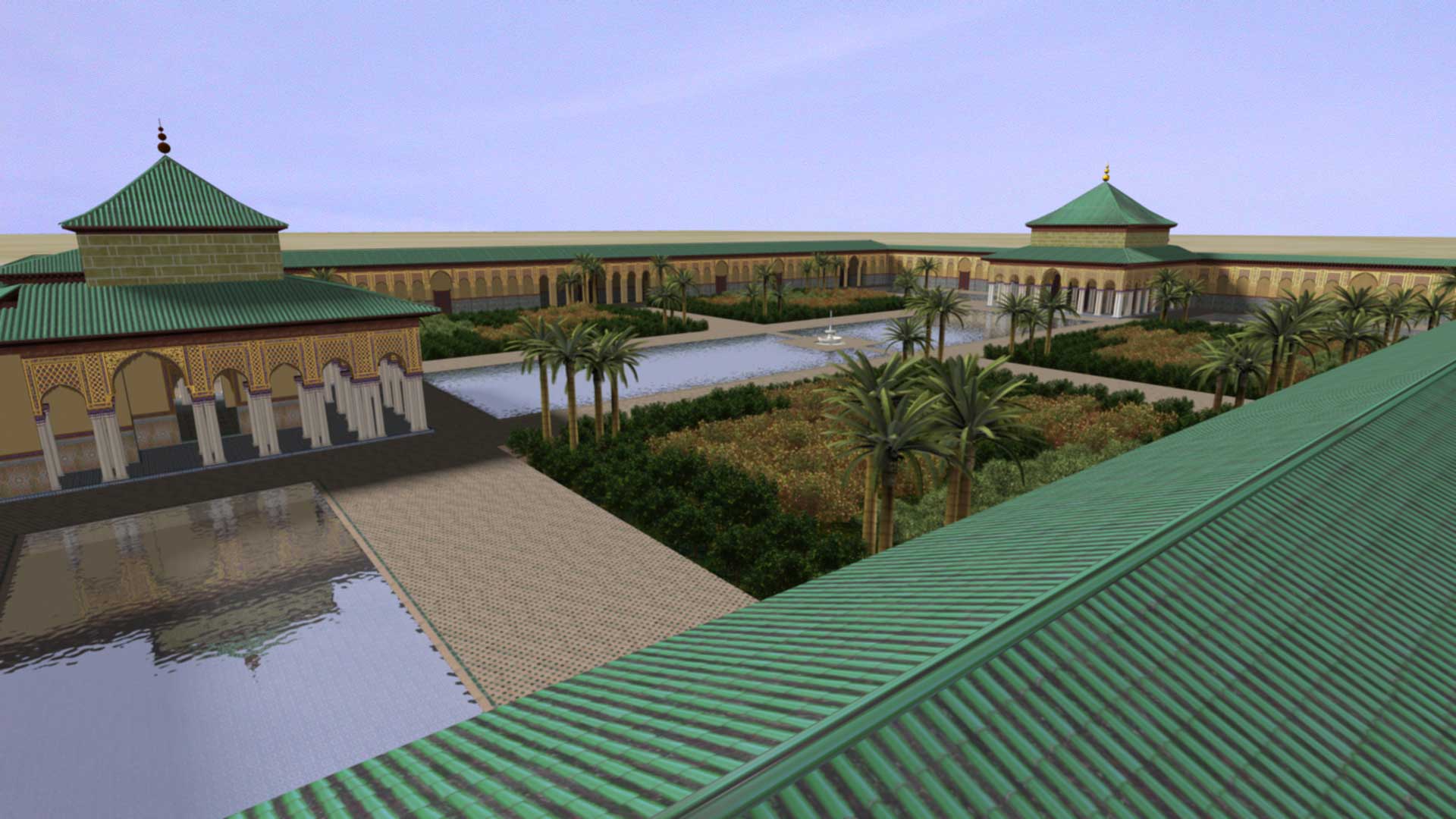 Open every day from 9am to 5pm

Access: from the Place des Ferblantiers, near the Bahia Palace, cross the square and pass an arch, the entrance is visible on the right after the arch.

http://arqarqt.revistas.csic.es/index.php/arqarqt/article/view/161/173 with the complimentary agreement of the EEA to publish the 3D views of Antonio Amalgro Gorbea’s of El Badi Palace.