Berber Rugs and Moroccan Carpets | History of a Millenary Heritage

Berber Rugs and Moroccan Carpets | History of a Millenary Heritage

… The Berber Rugs and Moroccan Carpets are the testimony of a very old craft industry resulting from a Berber Rural or Moroccan urban culture. The Berber tribes in the Atlas Mountains have been able to perpetuate, from mother to daughter, an exceptional knowledge of weaving and wool trades. In the family sphere, the Art of Carpet Knotting, especially of high wool, incorporates symbolic language and protective rites. 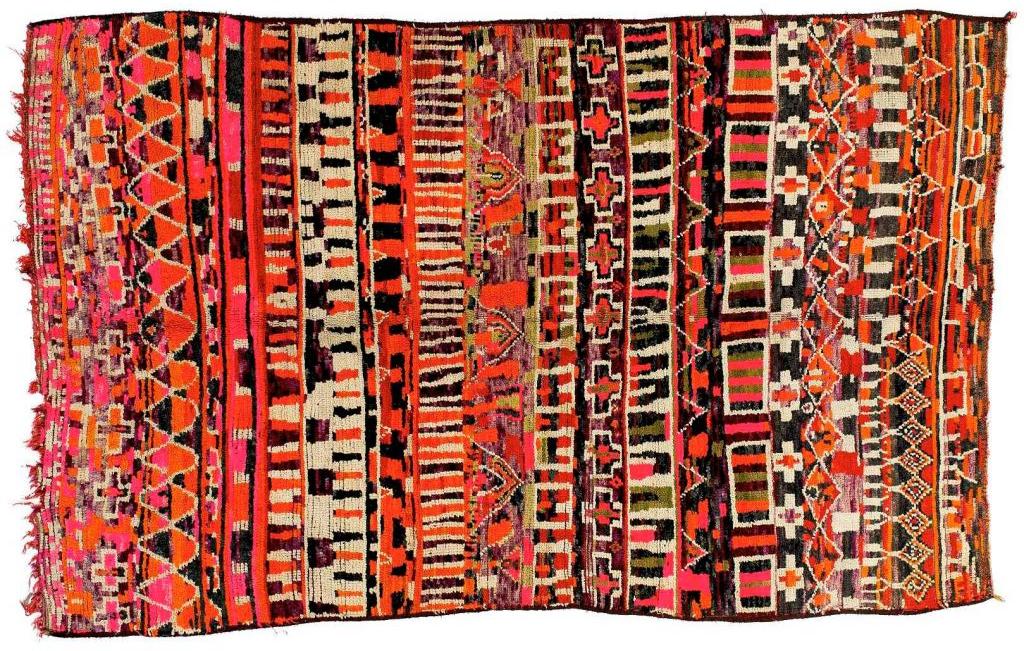 1.1 Back to the Neolithic Period

Resulting from an ancestral knowledge that dates back to the Neolithic period, the Berber Rugs and Moroccan carpets are the fruit of centuries-old tradition. Out of the way of the Silk Road and the great civilizations, the Berbers of the Atlas Mountains and the Atlantic Plains have preserved an original and different wool carpet craft. This specificity is especially due to the natural geographical borders represented by the Atlas Mountains and the Sahara Desert. Passed down from generation to generation, knotting and weaving techniques are preserved and the motifs reproduce rock art. The majority of Moroccan carpets are Berber because of the many rural areas of pastoral tradition and the high production of Wool in the Atlas, High and Medium regions, as well as Southern Morocco. Nevertheless there is a Carpet called urban or Rabat Rug. 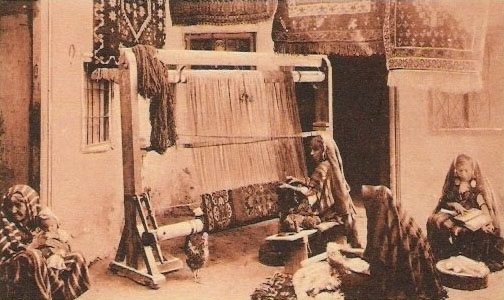 Berber rugs and Moroccan carpets, known in arabic as “zarabia”, are a major element of the movable cultural heritage. The Moroccan carpet is the prerogative of each tribe and is produced according to a traditional process in the family environment. The rural and nomadic culture of the Berbers who live in tents leaves a major place for cushions, bags, weavings and carpets, which are the only luxury that families can carry. It can be used for a variety of purposes, such as mattresses, nomad tent floor coverings, draperies, clothing bags or as a decorative feature on the horse’s saddle.

The Berber carpet is above all an object of art that expresses the knowledge of rural people and nomadic tribes. Human material and knowledge are transmitted locally and far from the cities, from mother to daughter, within the same tribe. 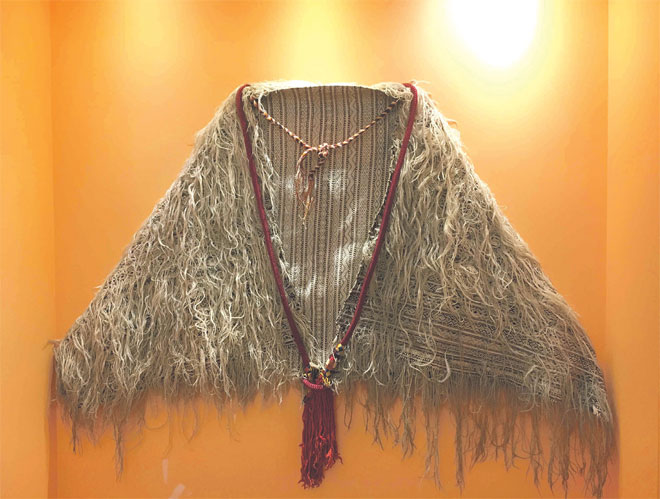 Read Article What to Visit in Marrakech

2 Berber Rugs and Moroccan Carpets: Technical Know-How of the Carpet

Made in the family sphere, the Carpet is a valuable outlet for animal farming by allowing the use of wool from the herds of sheep in the village. Wool offers the raw material to dress and arrange or decorate its habitat. Men and women work together. The woman weaves and models the carpets while the man trades them for other products. The art of carpeting requires the implementation of a series of technical processes: mowing, washing, drying, combing and carding, dyeing, assembling and spinning.

The wool comes from the family sheepfold and the sheep are sheared at home.

The wool is then soaked, rinsed and drained. It is then placed in the sun to dry.

The next step is carding, i.e. untangling and combing the wool in order to spin it.

The spinning will make it possible to obtain balls of wool which will then be dyed.

For dyeing, the wool must be boiled and stirred with a stick without stopping. It is the natural plants that give their color to the sheep’s wool : madder or cochineal for the red, indigo for the blues, gaude or daphne for the yellow, pomegranate bark for the black.

The assembly of the wool makes it possible to define the size of the carpet and its structure.

The weaving or knotting will now begin. Berber Rugs and Moroccan carpets are made of warp and weft yarns. Between the weft yarns are knotted small knots on 2 adjacent warp yarns.

Read Article How to Get Around Marrakech


The Weaving contains an important symbolism and the motifs and combinations carry in the Berber community a social and ethical meaning. As well it has a philosophical representation of the world, of life, of the sacred and of fertility. These diamond, chevron, line, triangle or cross shapes are reproduced not only on carpets, but also on walls, pottery, clothing, jewellery, tattoos and wooden and iron chests. Berber carpets are the testimony of an ancient world.

They are a specifically feminine language not accessible to men. The carpet reflects the periods of a woman’s life and her personal experience. Essentially oral, Berber culture is transmitted through abstract and graphic art. 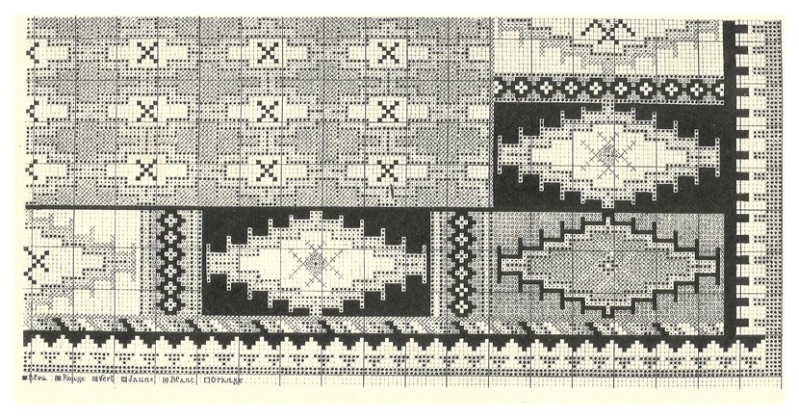 Each tribe has its own visual language and colours according to the natural ingredients available. The geometric angular shapes, in diamond and triangle, symbolize the stages of women’s weaving lives and nature: young girl, then married, pregnant and finally giving birth. Symbols of birds, animals and insects are common. As part of the dowry of the married woman, carpets have a heritage value.

In the 20th century, the sedentary nature of the tribes led to changes as the carpet moved from purely domestic and artisanal production to production for sale.

The weaving is also marked by beliefs and superstition. The white color of the wool is a good omen and supposed to bring the “baraka”. According to local beliefs, wool has the power to protect, and the knots of the carpet made during the warping stage keep away in particular the evil eye and the evil geniuses.

A number of rites are supposed to protect against evil fate. Indeed, nothing should ever be hung on the uprights of the loom. A sprig of wool is tied to the leg of the mule purchased to bless it. The comb also has magical virtues.

The branches represent the difficulty and danger, the Berber cross recalls the architecture of the kasbahs, a continuous zigzag represents the river, the snake or the family. 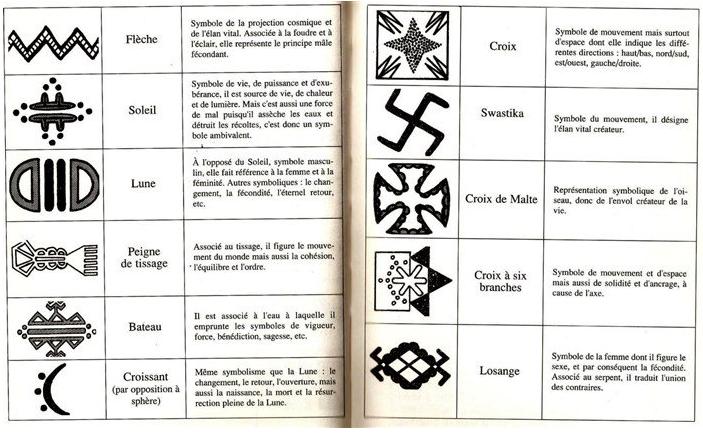 There are 2 types of carpets: the Urban carpet of Rabat and Casablanca, with a rich floral decoration, and the Rural carpet, which comes from the country of the High Atlas and Marrakech, or from the Middle Atlas and eastern Morocco. Each tribe has its own style that identifies itself according to colors, shapes, techniques and symbols. 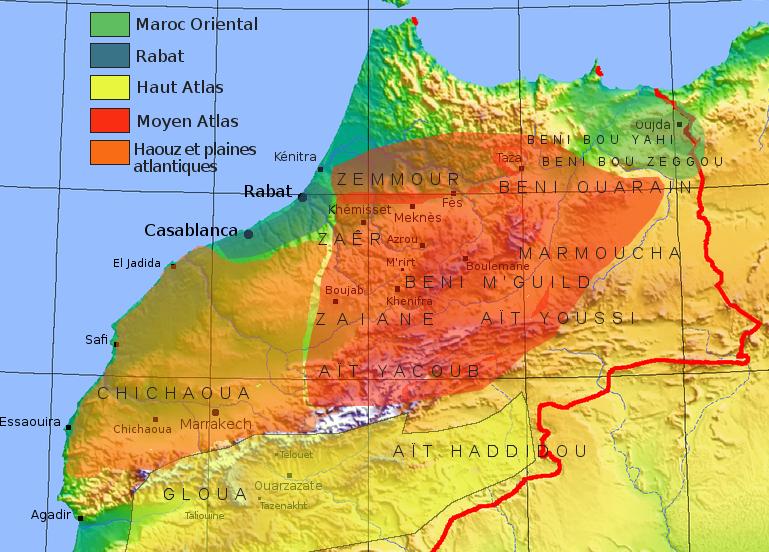 located between the Rif in northern Morocco and the High Atlas, the Middle Atlas is the main production region of the Carpets in the Kingdom. The Tribes who manufacture Carpets are the Zemmour, Beni Ouarain for the most famous, but also Beni Mguild and Marmoucha… These rugs are characterized by their geometric patterns.

The Marmoucha, east of the atlas and south of Beni Ouarain, have the originality to be woven with great freedom, although a symmetry appears. 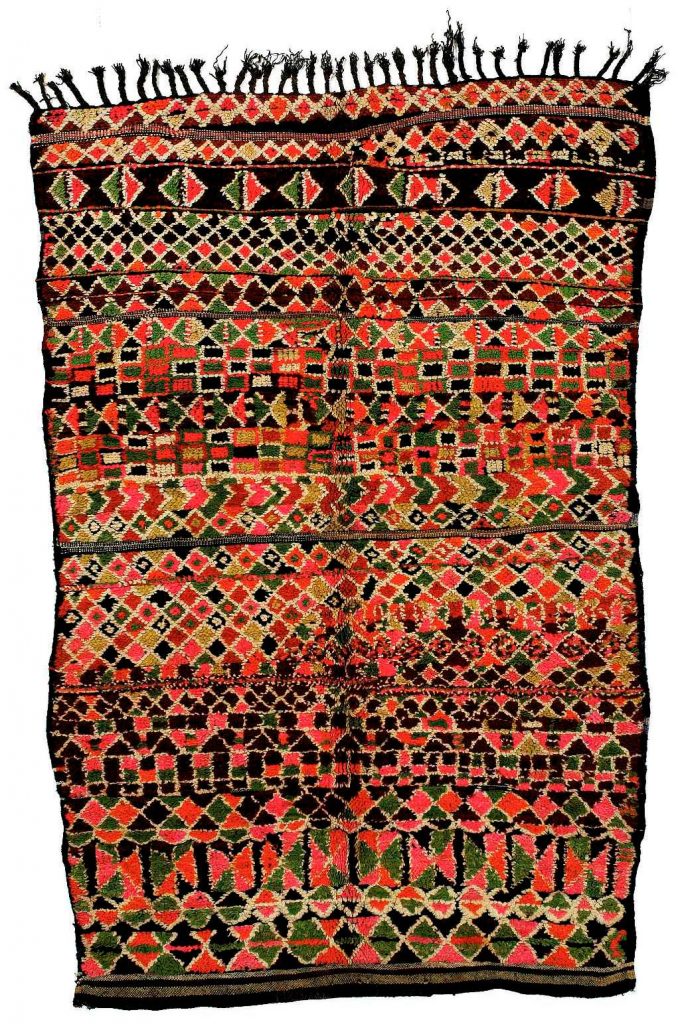 The Beni Ouarain are easily recognizable by their white background decorated with black patterns sometimes lozenges. Made from a very fine quality knotted wool, they are surprisingly contemporary and keep an animal aspect. Spoken in high wool, the Beni Ouarain rugs appear like a snow or fleece. These carpets were used under the collective bed tent. 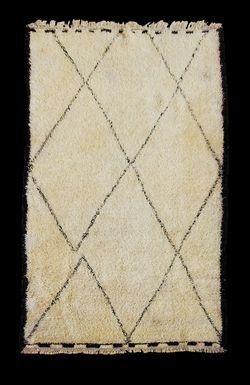 The carpets of the Zemmour tribes of the Khemisset region have a geometric decoration only, they have a red background with yellow and orange tips, as well as a little white and black. Decorations can frame the carpet on 3 sides and leave the 4th open. The patterns can also be very free. 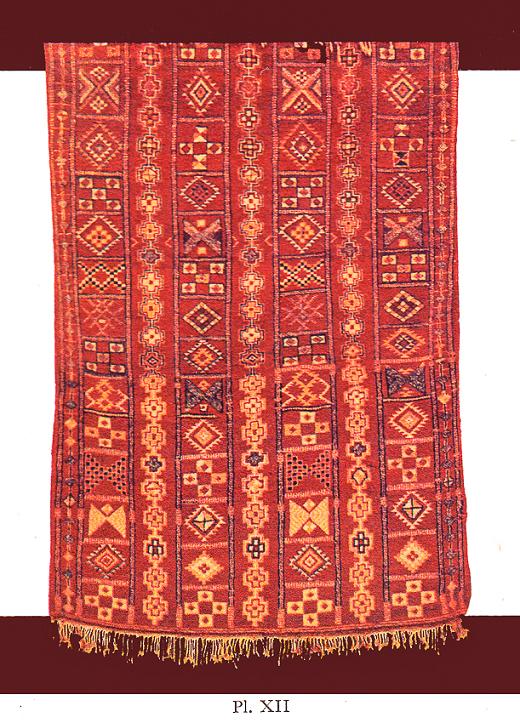 The carpets of the Beni M’guild tribe are generally tied in horizontal bands that use the losanitary motifs. Smaller patterns make the decoration and colour shades more complex. 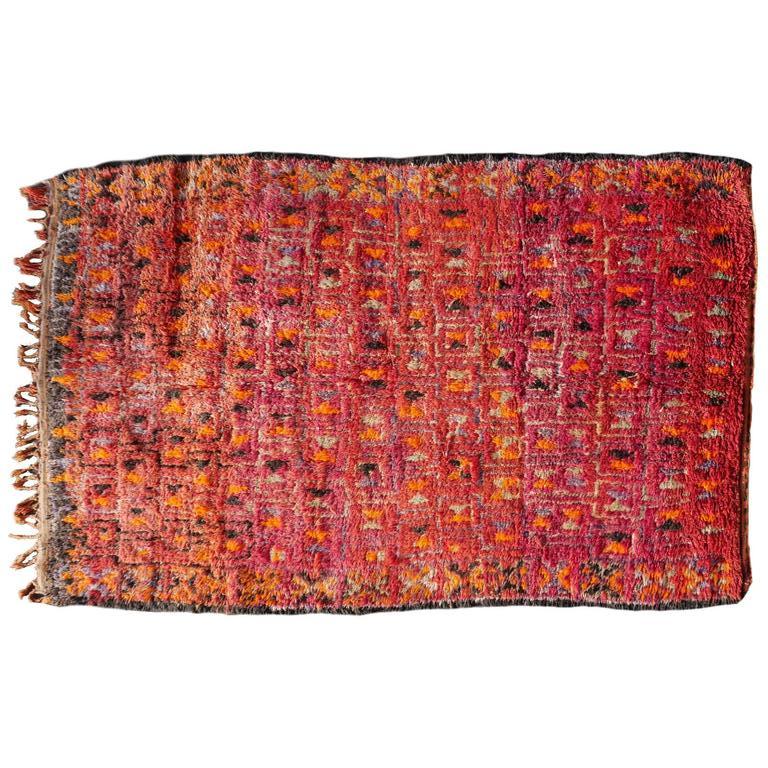 4.3 Carpets of the Oriental

Located in the North-East of Morocco, on the Algerian border and near the Mediterranean Sea, this region produces carpets with slightly asymmetrical geometric patterns, which have the particularity of being woven by man (embroiderers).

4.4 Carpets of the High Atlas

Carpets woven by women, with a high quality wool with long fiber, and natural coloring based on henna, madder, saffron, indigo.

These rugs are made by the Ait Ouaouzguite tribes in the Tazenakht region. In this region, the carpets are also made of high wool, with a yellow background. They are called “Qtifa” rather than “zarabia”, a general term in Moroccan. In Berber, carpet is translated as “Tazarbit” 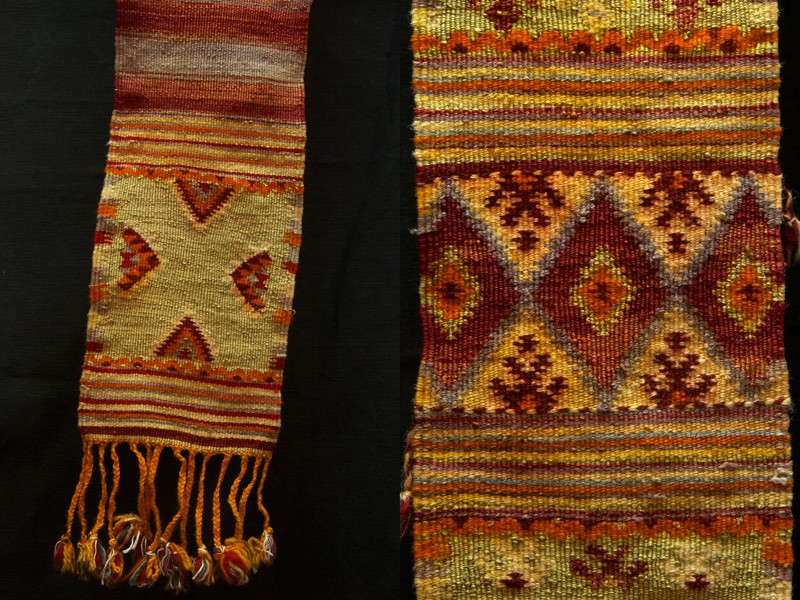 The Glaoui Carpet combines all types of weaving since it is knotted, woven and embroidered at the same time. The alternation of strips revitalizes the decor. 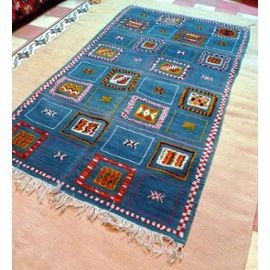 The Zanafi Carpet, west of Ouarzazate, is made up of white and black stripes. It can be sewn to be used as a bag. 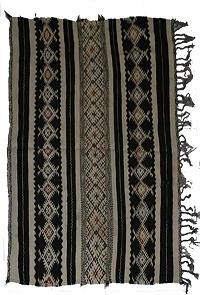 4.5 In the Haouz of Marrakech

The Chichaoua region is very rich in carpet production, with no symmetry, inspired by flora and tattoos. With a red wine background or red brick or old pink, the Chichaoua knotted carpets, between Marrakech and Essaouira, present the originality to be united, to represent scattered patterns or successive transversal patterns. Mixing wool and goat hair is possible. 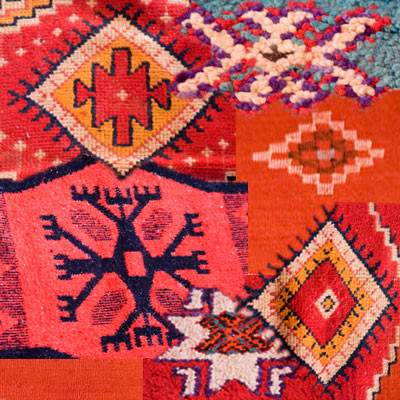 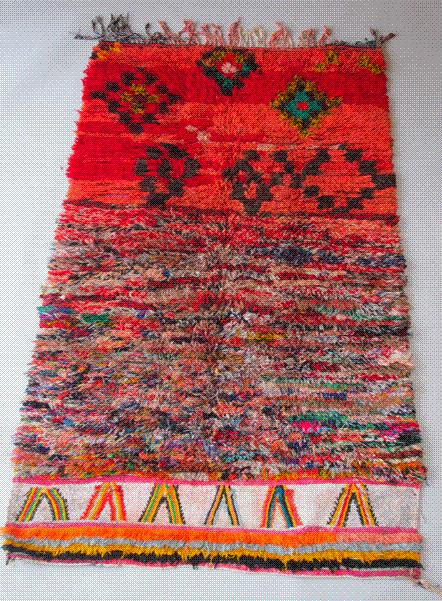 The carpets of the Essaouira Region are produced by the Chiadma tribes. There is a profusion of small patterns knotted horizontally that give the carpet an intense chromatic density.

The Urban Carpet has a frame of several strips with an octagonal medallion in the centre in a geometric or rose shape. 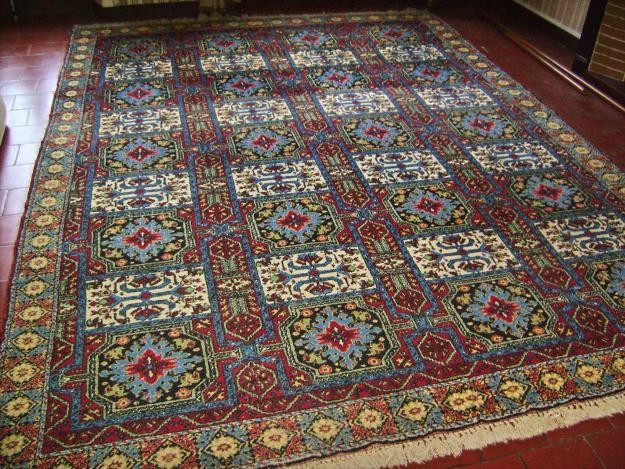 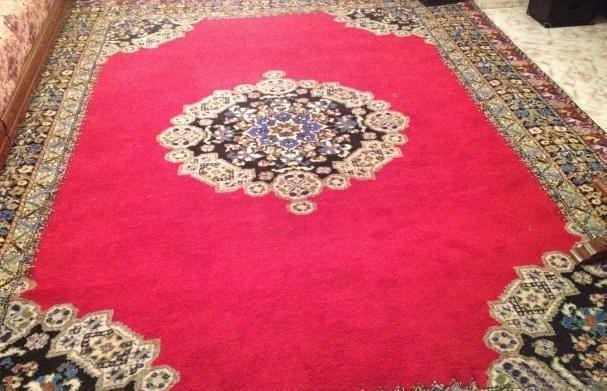 Gardens of Marrakech | Exoticism & Poetry
Ourika Valley What is it ?
What to Do in 2017 in Marrakech ? What to See and to Visit ?
Majorelle Garden in Marrakech | a Moroccan Love Story
Dar Si Said Moroccan Carpet and Weaving Museum | Opening 2018 in Marrakech
Negotiation in Marrakech Souks | Where to Shop ? What Souvenirs ? Schedules, Map of the 18 Souks