Hammam in Marrakech History of an Ancestral Ritual

Hammam in Marrakech History is a Long Lasting Tradition

… This custom, which is made up of technical, religious and societal aspects, appeared Centuries Ago, and is still popular nowadays because hot water and steam bath brings unparalleled relaxation and spirituality.

In Morocco and Marrakech in particular, the hammam is located in multiple places: Tourism wellbeing & wellness in Hammam & Spas of Riads or hotels meets the practice of deep cultural traditions in the city’s Public Hammams. All Classes of population frequent the Hammam.

View Article What to See in the Medina of Marrakech ?

Even though the Hammam in Marrakech History appears in the 7th century, Hammam practice dates back to Roman times in Christian civilization. The Roman Empire, which extended around the Mediterranean, had many baths:”Thermae”. These people mastered the hydraulic technologies of water supply, storage, heating and discharge.

Later, in the 7th century AD, with the conquest of Syria and Alexandria (642 AD) by the Arabs on the Mediterranean coast of Egypt, the Muslim religion was born. Its influence extended in the Ottoman Empire, in the Maghreb and the Middle East, leading to the creation of Moorish baths (referring to “Al Andalous” Muslim Spain) or Turkish steam baths with their origins in the Roman thermal baths. An anecdote tells that the manuscripts of the Alexandria library, during its destruction, were burned to heat the hammam. In Arabic,”Hammam” means hot water and is characterized by a steam bath where the cold water swimming pool of the typical Roman thermal baths disappears because it is considered unsuitable. Muslims prefer running water to wash and rinse themselves of impurities.

View Article How to Get around Marrakech by Public Transport ?

The remains of this system date back to the Greek period and also to antiquity, almost 2000 years before the Christian era. But it was the Romans who greatly improved this technique because of their intensive use. The hypocaust corresponds to a network, in the basement of the hammam, or a house, made up of galleries or pipes, in which the hot air circulates and which allows the heating of the rooms or basins of the thermal baths by the ground. The floor consisted of slabs resting on 60cm and 120cm high pillars.

The thickness of the soil, which was long to heat up, allowed the heat to be retained. The heating process includes a fireplace located outside, at the entrance of the building with an opening to feed the fireplace. Another opening allows the smoke, and therefore the heat, to be transmitted towards the hypocaust. The walls were also doubled, which allowed the warm air to circulate around the rooms. The fireplace is located near the hottest room and spreads its warmth to the other rooms.

The steam bath is made up of several rooms, which are getting warmer and warmer, depending on their distance from the fireplace.  The smoke is evacuated from the other side of the building by one or more chimneys. The temperature of a room can reach 30 or even 50 degrees with heating walls.

The Farnatchi is the Person in charge of heating the water. The Farnatchi supplies the hammam with wood or sawdust. In black smoke and a very high temperature, the working conditions are difficult. It is also at the Farnatchi that the neighboring Riads bring their cooking dishes to the oven, so that it can be placed in the embers of the Hammam oven. In Marrakech, the typical dish is Tanjia, which cooks 4 hours in an amphora.

But today, a few hammams are modernizing to reduce the quantity of firewood and costs and better respect the environment. A technology for heating hammams by the ground, and solar, as well as with biomass boiler technology, powered by olive kernel fuel, has been developed. The hammam of Riad Al Ksar has been connected since 2015 to the solar panels that supply a floor and wall heating circuit. This allows on sunny days to heat the Hammam 100% with solar energy.

3/ Specificities of the Baths per Country

In Roman times, the hammam generally had 3 rooms: the “frigidarium” at 20 degrees, allowing rest, the “tepidarium” at 32 degrees, conducive to care and massage; and the “caldarium” at 40 degrees and more allowing sweating prior to cares and where the steam mists are located. The laconicum was a circular room without pool and with a dome-shaped ceiling, where a stove was located to produce more heat, but it was dry and sweaty. 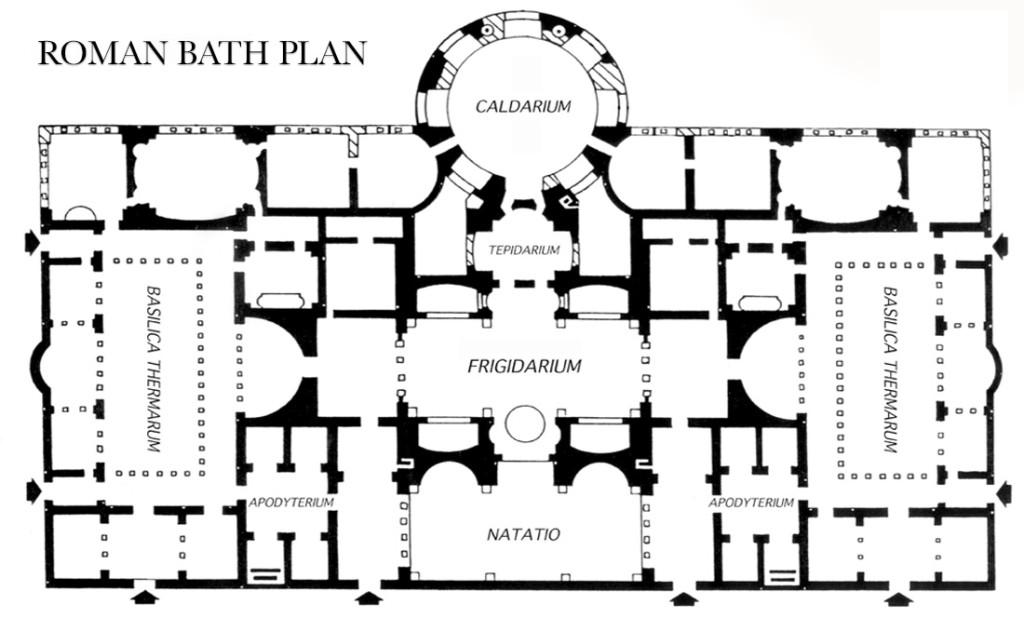 Turkish hammams include the Camekan, entrance hall, where you can change. It can be a large collective hall or a room with private cabins. Once provide you with a Pestemal, a fabric used to cover your body. In the Hararet, warm room, you’ll start sweating. In this room is located the Gobek Tasi, an elevated marble slab where you will be provided with soaping, using the black soap composed of olive oil. A scrub with the Kese glove will finally be given to you. In the Sogukluk, a cold room, you can relax with a glass of tea. 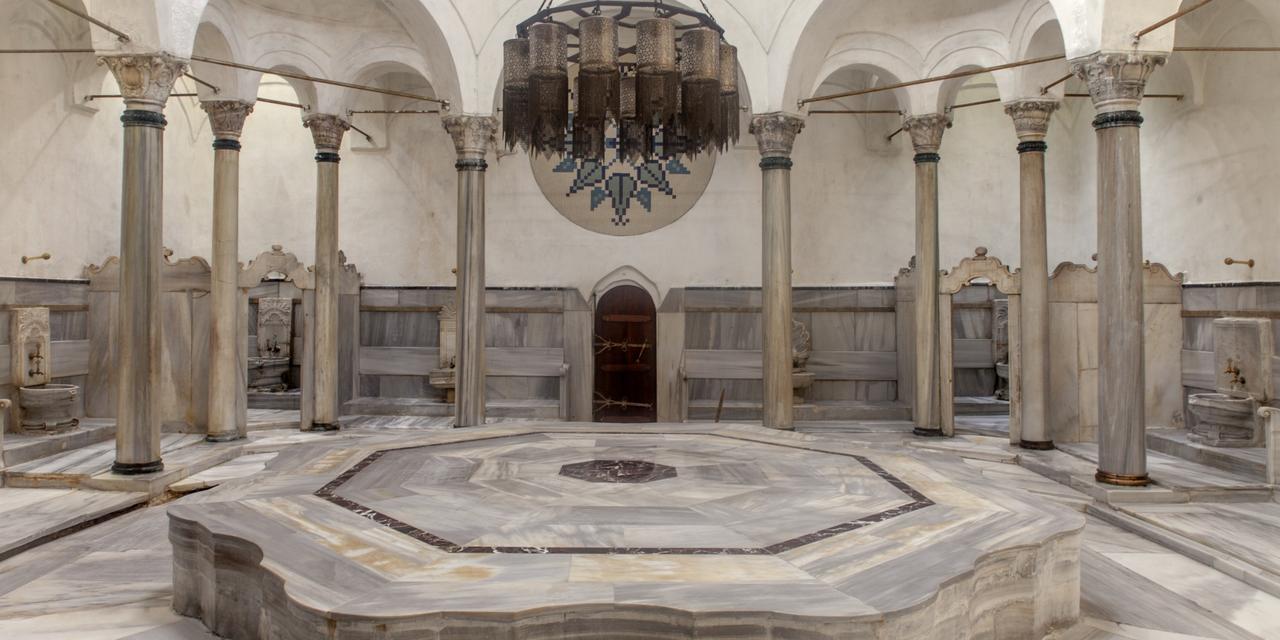 Hammam in Marrakech History of the Muslim world

As in the Roman baths, the hammam in Marrakech history consists of several rooms of different temperatures: the cloakroom or reception room is called al-maslakh, cold in Arabic; then the bathroom, unheated, is called barid, the next room moderately heated is called wastani, and finally the most heated room is called harara, warm in Arabic. However, the baths disappear because they are considered impure because the water stagnates. Muslims prefer hot and humid rooms with taps and running water. 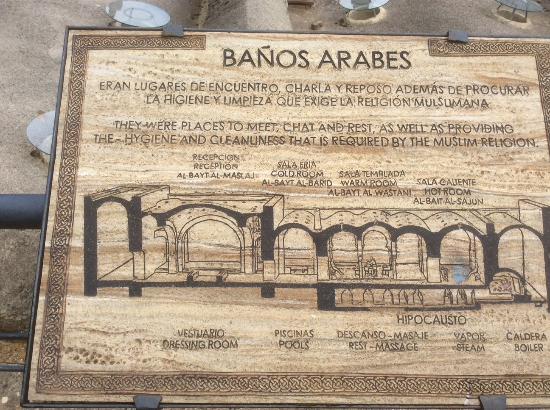 Discover the Excursions Around Marrakech for One Day or More

The hammam in the Arab-Muslim world will develop after the advent of Islam. With its principles of ablutions, i. e. the purification of body and soul before prayer, the Qur’an advocates the use of the Hammam. In the Land of Islam, the Hammam is often situated next to the Mosque. It has a strong religious meaning because Islam advocates the ablutions in order to purify oneself before prayer, before each of the 5 daily prayers, especially on Fridays. Hammams are still widespread in Muslim countries today.

The Hammam was originally reserved for men only, and then women were admitted. Jews and Christians were also admitted. However, men are always separated from women, who come to different parts of the city or at different times or days. For women, the hammam was considered beneficial to fertility, as well as a place of spirituality.

5/ Social Life in the Hammam

The hammam is either private or public. In the past, only well-to-do families had a steam bath at home. It usually had only one hot room. When the hammam is open to the public, it is a popular place. At that time, hot water did not reach the houses except in the homes of the notables. The production of hot water required a fireplace to be heated for a long time or even permanently in order to prevent heating loss. This meant a costly and time-consuming ongoing maintenance. Its pooling thus made it possible to reduce the cost for each one. Roman baths or Arab hammams have always been a social place.

Men and women separately met there, from all classes. In the Hammam, there is no social distinction and all classes mix up. For the women, during the time when the hammam was the only authorized public place to go to, this place constituted a great moment of well-being and escape of the day to day life. Mothers also used to look for future wives for their male children. Social codes made it possible to know the family situations of each one according to the colour of the towel 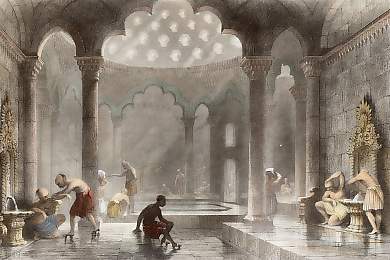 Discover the Activities To Do in Marrakech & Around

6/ Hammam in Art and Literature: Thousand and one Nights

In the West, from the orientalist period of the 19th century onwards, the Hammam is considered as a magical or mysterious place. It arouses the interest of orientalist artists and writers of the time because it is very developed in Muslim society, and automatically very present in daily life. Due to its architectural beauty and the originality of local lifestyles, the hammam is one of the orientalist elements that is just as much a part of the imagination as the harem, palace or oriental tales. In the artistic works, the different classes of society are present in the hammam (slaves, masters…) without distinction of clothing.

With Napoleon’s Egyptian campaign, then the Universal Exhibition of 1867, and finally the opening of the Suez Canal in 1869, the east will remain in people’s minds as a world of discovery, travel and exoticism. In the 20th century, it is thanks to the development of leisure and body well-being that the hammam will retain its popularity, and even spread to non-Muslim cultures. The benefits of hot water and heat are popularized by medicine.

However, the number of steam baths is decreasing due to the development of modern bathrooms inside the houses. However, there are still a few hammams where it is good to relive the ancestral rites of warmth and warm water, and to share these places of relaxation. 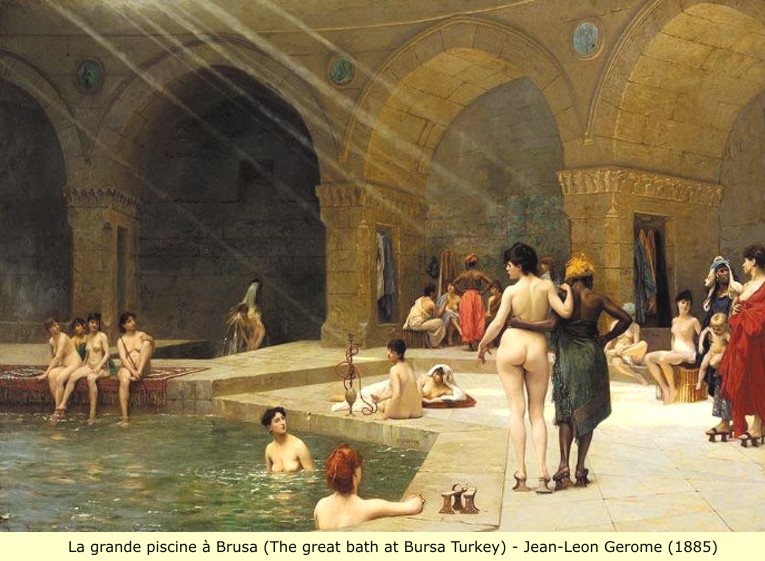 Even today, the Hammam in Marrakech History is very popular in Morocco where not everyone has the modern comfort of running water or a bathroom.

The traditional Hammams, called “Beldi”, are the public hammams. There are always rooms for men and another sector for women. Otherwise, if the hammam does not have a separation, certain days or periods of the day are reserved for either sex.

The ritual consists of staying in the warmest room for a while to activate sweating and dilation of the pores of the skin, allowing toxins to escape. Soap yourself with Hammam in Marrakech Moroccan natural black soap and then srub energetically with a kessa glove to remove impurities from the skin’s surface. 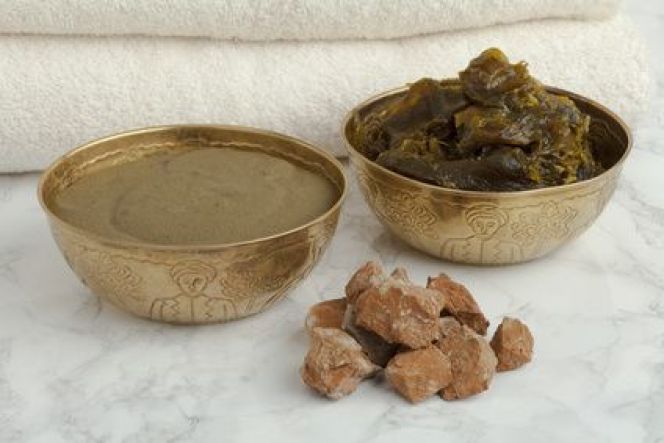 The entrance fee for Hammam in Marrakech is MAD10, but no utensils or products are provided. You must bring your kessa glove, black soap, shampoo, sandals and towel. It is possible to call an employee of the hammam who will exfoliate you. The rate is 50 Dirhams.

It exists in all the districts in Marrakech: Hammam in Marrakech History districts (médina) : Dar El Bacha, Riad Zitoun, Mellah but also in other districts such as Mhamid or Sidi youssef or Guéliz 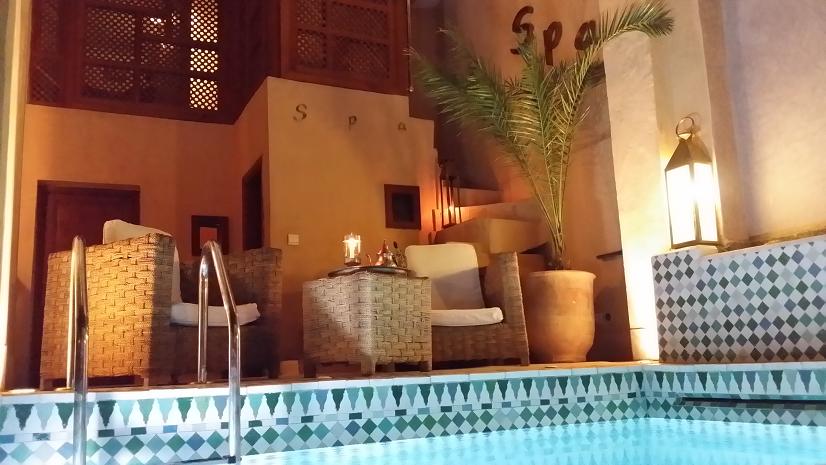 The Spa by Riad Al Ksar repeats this same ancestral ritual of the Hammam in Marrakech history, unchanged for centuries, which brings natural well-being and relaxation of body and mind.

All bodycares are provided with towels, sandals, bathrobes and single-use briefs. The Hammam treatments are carried out by the Hammam staff with the natural products of Morocco such as eucalyptus-flavoured black soap, ghassoul (Moroccan clay) and kessa glove.

Time Out in Marrakech

Weather & Temperatures by Month in Marrakech

Nightlife in Marrakech Restaurants Nightclubs Shopping | Quick Guide
Gardens of Marrakech | Exoticism & Poetry
What to Do in 2017 in Marrakech ? What to See and to Visit ?
Dar Si Said Moroccan Carpet and Weaving Museum | Opening 2018 in Marrakech
Berbers in Morocco | Plurimillenarian Indelible Maghreb Civilization
History of Marrakech | The Great Era of the Building Sultans